The recent death of Sri Shim by a boat propeller has energized calls for safer waters off Hawaii.

Luke Evslin, injured in a high profile propeller accident 5 years ago, is also speaking out for the need for propeller guards.

House Bill 2024 now calls for propeller guards / prop guards to be installed on all motorized recreational boats operating within 500 meters of shore.

A House Committee will hold a hearing on the bill Wednesday 17 February at 9am. 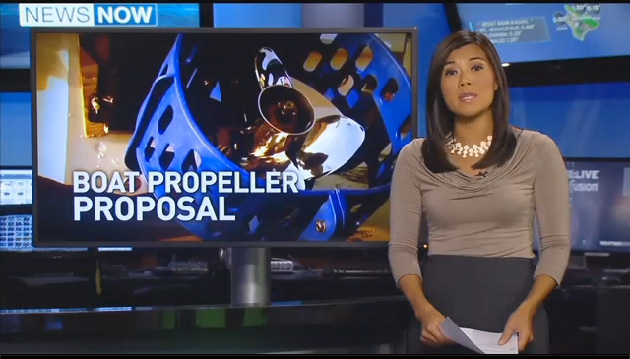 Those for the bill say it will save lives, boats still operate just fine, and propeller guards don’t cost much.

Those in opposition say propeller guards are not necessary and will negatively impact boat performance.

Hawaii Department of Land and Natural Resources has not taken a position on the issue.

The bill says a propeller guard means: An after-market physical barrier including a cage, screen, vane guard, shroud, ring, deflector, or similar technology designed to be installed on the propeller for protecting the propeller, marine life, or persons from damage or harm.

The bill also says a safety propeller is acceptable. They call them “a propeller that is manufactured to incorporate a physical barrier or rounded leading blade edges for the purpose of protecting marine life or persons from damage or harm.”

Hawaii News Now reports there have been 5 propeller strikes in Hawaii since 2011, three of those injured died.

Thanks to Hawaii News Now for their coverage of this breaking story.

We can see some of testimony submitted online at Testimony of Suzanne D. Chase Chairperson

I noticed a few people copied the list of objections to propeller guards from out site and submitted it.

We only learned of the bill and the hearing this morning (17th). We are posting this page somewhere near the time the meeting is to start so we did not submit to the hearing.

Under reporting (accidents not being reported) has long been a problem. Some states do not report their accidents due to privacy issues. We checked and 2008 was the last year Hawaii released their data. That prevents those studying boating accidents (such as us studying propeller accidents) from being able to see the basic accident data and learning anything from accidents in Hawaii.

I checked our online annual lists of news reports of propeller injuries and found:

That makes 5 strikes of which two people were struck in one of them, and a total of 3 fatalities. Looks like we might be the source for Hawaii News Now’s accident count. I think we may be fact checking each other.

Our thoughts on the propeller guard proposal

We wish propeller guards were more broadly viewed as a propeller safety alternative, but are not for mandatory use on all recreational vessels in Hawaii.

We assume this proposal will quickly fail due to industry opposition.

Issues raised will include:

I see safety propellers on the list of acceptable alternatives in the bill. These have yet to be widely proven to be effective.

The legislature will quickly be bogged down in all kinds of issues related to guards, give up, and move onto another topic just like the U.S. Coast Guard has countless times before.

Propeller guards are not the only approach to boat propeller safety. We suggest a broader look at the many devices on the market, including training, and excessive use of alcohol. Then to draw up some parameters better fitting the situation in Hawaii.

First, it is great that Hawaii has mandatory boater education. It has a few exemptions, one being for operators of vessels of ten horsepower or less. Hawaii has taken a leadership role in requiring boater safety education. We salute them for that.

Among the many devices with potential application to boat propeller safety are:

In much of the U.S. prop injuries tend to happen at the stern. People back over those in the water, the engine is running when people are boarding, people are pulled into the propeller from the stern. They are picking up fallen skiers or wakeboards and the stern swings over those in the water, etc. As a result, marine drives with the propeller further up under the boat are seen as safer in many applications.

However in Hawaii, with a higher proportion of people being ran over in open water, some of these “up under the boat” drives may not prevent these types of accidents. Inboard boats (drive up under boat), tunnel drives, pod drives, and forward drives may still pose a significant hazard.

The industry often uses “unintended consequences” an argument against requiring propeller safety devices in specific applications. While we do not always agree on those counts, we do agree that wide spread requirements of guards on ALL recreational power boats near shore across the State of Hawaii would definitely created unintended consequences and they would not all be good. We can barely imagine the range of types of vessels that would be included in this proposal. That is not a good way or a safe way to start.

Many similar bills have been proposed in other states and failed. Please don’t just fail and stop there.

What to do now or What’s Next

I am not in Hawaii and have never been there, but from what I have read and observed it looks like Hawaii has greater propeller risk exposure in the area of beaches, open water swimming, free diving, diving, spearfishing, tour boats, race support boats for canoe races etc.

Hawaii might try to find the best tools to target those areas or whatever areas they feel have the greatest risk. Please do not forget Public Service Announcements and the existing mandatory boating safety training program can be great tools in educating the public of propeller injuries and how to avoid them.

Here we have life jacket loaner programs at many sites. People just pick them up, use them for the day and bring them back. A loaner program in Hawaii might be established for dive flags and other dive marking accessories?

We do not feel that propeller guards on every recreational power boat near shore in Hawaii is the best answer.

As for smaller boats, Surf Saving Australia has a long history of using propeller guards. Plus over the last several years Australia has began requiring propeller guards on boats used with youth sailing programs, scouting and similar youth programs. They are also used by the military. Their version of OSHA, Occupational Safety and Health, has been fining organizations including universities for not properly protecting their people from propeller injuries.

For those who would like to look very broadly at the situation, we have a very large Propeller Injury Mitigation Chart.