Cash Fox, a 7 year old Florida boy was on a 20 foot boat with his father (Kevin Cash) and his 11 year old brother near Stump Pass Marina, near Englewood in Charlotte County, Florida the morning of Saturday 9 July 2016. 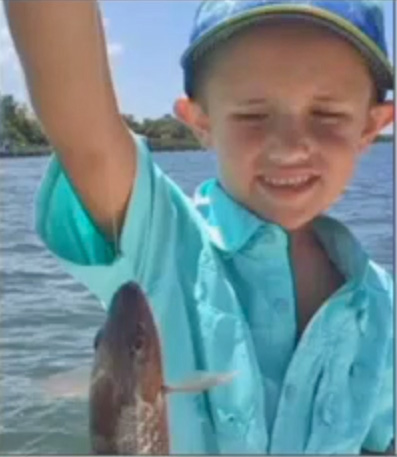 Cash Fox
based on NBC2 photo

Cash was not wearing a life jacket.

Cash was setting at the back of the boat, his father started the boat, the throttle “bounced” (we are not sure exactly what that means), Cash was ejected onto the propeller, receiving wounds to his abdomen.

The boy was taken to Englewood Community Hospital where he later died.

The family was said to often be on the water and Cash was known for loving to go fishing and for catching the most fish.

Florida Fish and Wildlife Conservation (FFWC) used the opportunity to encourage everybody to wear a life jacket, but noted they were not sure a life jacket would have helped in this situation.

An NBC2 video shows what appears to the be boat in which the accident occurred. The boat in the video is powered by a large Yamaha outboard motor.

Per WWSB ABC7, the boat was a 20 foot rented Sea Hunt.