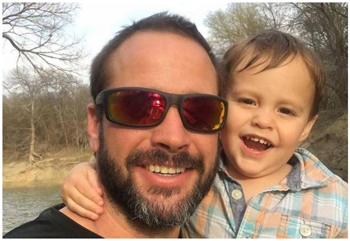 Between 5 and 6 pm Monday a boater found his boat on shore abandoned on Denton Creek just west of Highway 377 in what was referred to an an unusual location. The boater used the cell phone to call the family, then called 911. 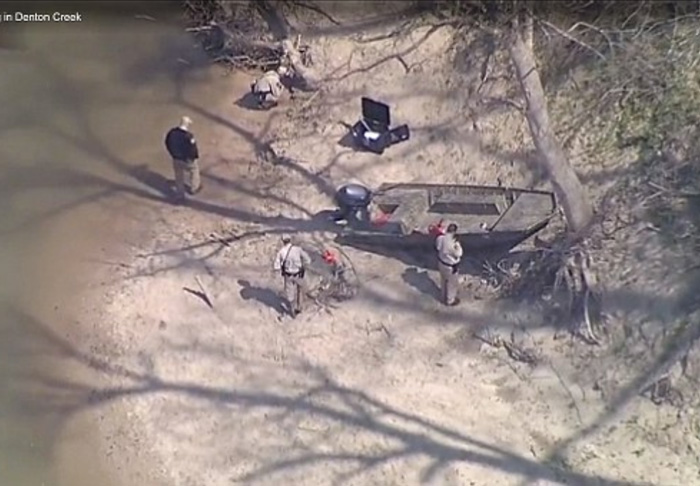 His cell phone and life jackets were found with the boat.

A search and rescue effort was mounted Monday night. The search was called off at 2am for safety, and restarted at 9am Tuesday. As a Flower Mound police officer and a game warden were headed to the boat on Tuesday morning about 8:45am, they saw two year old boy, Oliver, walking though heavy brush. He had survived being alone and cold in the woods overnight in a t-shirt and shorts with all kinds of wildlife nearby. Oliver was scratched up and cold but safe, and asked the officers for juice. He was taken to the Cooks Children’s Medical Center in Fort Worth to be check out, and found to be fine.

Brandon Barth, Emergency Management Officer with Flower Mound Fire Department noted in an interview with Dallas Morning News per Texas Hill Country that wildlife in the area included “snakes to coyotes to hogs”, and that it was quite a blessing that Oliver made it through the night.

The family of Matthew Meinert has asked that the following statement be shared.

“The family of Matthew Meinert are very saddened at the loss of a wonderful husband, father, son and great friend. His love for his wife and son Oliver, was beyond belief. Matt’s final hours were spent doing what he loved, playing and fishing with Oliver. Our faith has told us that Matthew was looking over his son during the night Oliver spent alone in the woods.

We would like to thank all the people of the Trophy Club Community who offered prayers and support during this time. We are extremely grateful for the efforts of the First Responders during the search, rescue and recovery.

We want to express much appreciation to the Trophy Club Police Department, specifically officer Lieutenant Tracey Shields. Thanks also to the Game Warden team, and Captain Cliff Swofford for their compassion and respect for the family during this difficult time.

We want to thank everyone for their thoughts and generosity. We ask for your continued prayers.

The family of Matthew Meinert.”

Search and rescue efforts were compounded by debris in the creek and its shallow depth of 1 to 11 feet.

News agencies reported it was unknown if the young boy had a life jacket on when he was found or not.

Officers reported, Oliver was unable to shed any light on what happened.

Just before Matthew and Oliver took off on their fishing trip, Matthew sent his wife a selfie of them together, the picture at the top of this post.

They were in a jon boat powered by a tiller steered Yamaha outboard motor. Friends reported Oliver often went fishing and duck hunting with his dad. 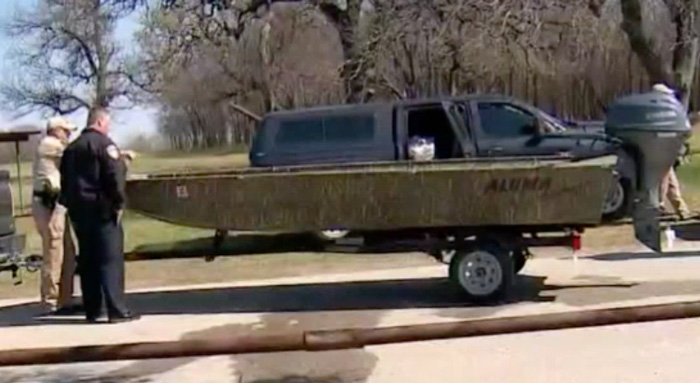 The search and recovery effort included 30 to 50 people at times from area agencies, drones, a helicopter, canine units, and at least 3 boats. Drones were used to search the woods nearby the creek.

By Thursday they switched to recovery mode. Game wardens in teams of two searched the water and banks 3 to 4 times per day per the Star-Telegram.

Matthew Meinert’s body was found underwater in six feet of water Friday 10 March, just yards from where his boat was found. Per Officer Swofford, he did not have a life jacket on when his body was found.

Many reports noted foul play was not expected. There was no mention of alcohol in any of the media reports.

Tarrant County Medical Examiner said Matthew Meinert died after being struck in the head by a boat propeller.

A big thanks to all the search and rescue folks. This list comes from NBC5: “Emergency personnel from Trophy Club, Texas Parks and Wildlife, Roanoke, Flower Mound, Argyle, Little Elm, Mansfield, Hurst, Joshua and Denton County assisted in the searches, which included searches on foot with trained dogs, with a boat equipped with sonar and with drones and a Department of Public Safety helicopter.”

Also a big thanks to the boaters that found the boat, called the family, and called 911. Matthew and Oliver had only been out about an hour. If the boat had not been reported till the next day, Oliver might not have been found alive.

A GoFundMe page has been setup to raise funds for the family. The page notes he also went by Matt and Matty.

Star-Telegram reports the U.S. Secret Service assisted in accessing data on the cellphone that was found that might assist in identifying the boat’s route.

As mentioned in the possible accident scenarios below, among the scenarios that could have happened is that Matthew Meinert fell out of or was ejected from or removed his hand from the tiller when the boat was underway. In such instances with a tiller steered (uses an extended handle on the outboard to steer it vs. a steering wheel) the outboard will swing to one side and the boat will circle in what is called the Circle of Death. To prevent this from happening, modern tiller steer outboards supply a kill switch lanyard. The lanyard is attached to the boat operator and to the outboard. If the operator falls out, the other end of the lanyard activates a switch that kills the outboard engine. In such instances the outboard will not continue to circle with the boat operator in the water.

Kill Switch image used by ABYC / Design Research Engineering to illustrate what a safety lanyard is in a report about warnings.

You can see the red lanyard in the image below extending from the tiller steered outboard to the boat operator. It runs across his tan pants just below his belt. 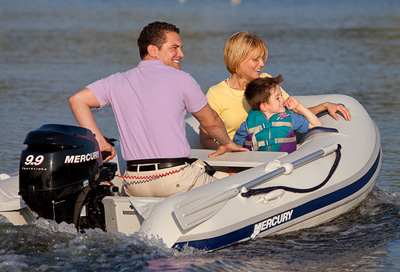 While actual survey data of kill switch lanyard use is virtually non-existent, it is well known that many people do not attach the kill switch lanyard. In fact, the State of Texas is currently considering making their use mandatory. House Bill 1988 sponsored by Lyle Larson would make their non use a violation of the Texas Water Safety Act. A 18 February 2017 Houston Chronicle news report says surveys indicate fewer than half the boat operators use them, and perhaps as few as 10 percent on Texas waterways use them.

While exactly what happened is speculation and conjuncture til the accident investigation is completed, KVUE reported, “While investigators still haven’t pieced the entire puzzle together, the prevailing theory is that Matthew Meinert might have fallen out into the water with the boat continuing under its own power until it hit shore and rammed into the tree.”

A Trophy Club man who died from a propeller strike last week on Denton Creek may have hit an object with his boat, throwing him into the water, authorities said Monday.

Police and a game warden said Monday they still are not sure how the accident occurred that killed Matthew Meinert, 38, of Trophy Club. But the boat was damaged, police Lt.Tracey Shields said Monday.

“There was no indication that he had had a problem with the motor and that he was in the water to fix it when he got hit,” Shields said.

We add they were fishing an area close to their home they had likely fished several times before.

Note: kill switch lanyards and their use are discussed in the section immediately above this one.

We would add the following POSSIBLE scenarios:

THE POSSIBLE SCENARIOS BELOW ARE ALL CONJECTURE AT THIS TIME

We do note that jon boats are very light compared to similar sized fiberglass boats, and thus when circling unmanned (or with only a child on board) with larger tiller steered outboards at higher throttle they can rare up and run in a very small circle, almost like they are dancing.

Again, every thing we said above regarding possible accident scenarios is total speculation at this point.

There are a lot of unknowns and speculation above. We look forward to the investigators sharing their findings.

The investigators will use the evidence available to draw their conclusions as to what happened.

Below is an News6 (Tulsa Oklahoma) video of a small bass boat in the Circle of Death at full throttle as an example of what a larger, higher horsepower, yet still small boat looks like circling from the air.

As per many propeller accidents, this one only received local/regional coverage. We would especially like to thank at least three UK media outlets that covered the accident some of them multiple times: Daily Mail, The Sun, and The Mirror.