The last day is typically reserved for the three subcommittees (Boats and Boat Equipment, Prevention Through People, and Strategic Planning) presenting resolutions, the discussion and formalization of those resolutions, and voting on them.

With no resolutions this year, beyond those recognizing those retiring, it was mostly comments on the three topics, planning for the future, and some informational presentations. 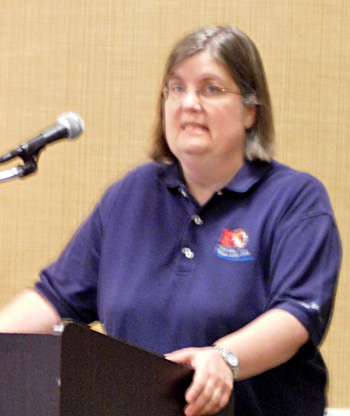 ACE owns a number of lakes and record accidents at those facilities, not all of which occur on the water.

USACE might be able to move the needle in ways USCG has not been able to on life jacket wear.

Several years ago they required life jacket wear on a part of Mississippi. They previously counted lake traffic there and on surrounding lakes. Traffic did not decrease on mandatory wear lakes, it actually increased. Wear rate is still higher there years later. She hopes to do some counting there this year.

Wear rate went up to about 80 percent.

Officers just enforced the law (mandatory wear) when they encountered people. They gave out warnings and tickets. The word got out and coffee shop chat spread the word.

With no resolutions pending, each subcommittee spoke, read their report, and discussed various items, mostly following up on items discussed earlier.

Paddlecraft is the next frontier to prevent injuries through people.

They are now going to add a standup paddleboarder to a similar logo.

Human powered craft are taxing efforts at the state level, but not contributing financially (fuel tax). They don’t consider themselves to be boaters.

This subcommittee will take ownership of paddle craft issues and present them at the next meeting.

There was a brief chat about non-pryotechnic signal devices doing some testing in early summer and mention of May 19th being wear your life jacket to work day.

They are focused on goals, timelines, and milestones. 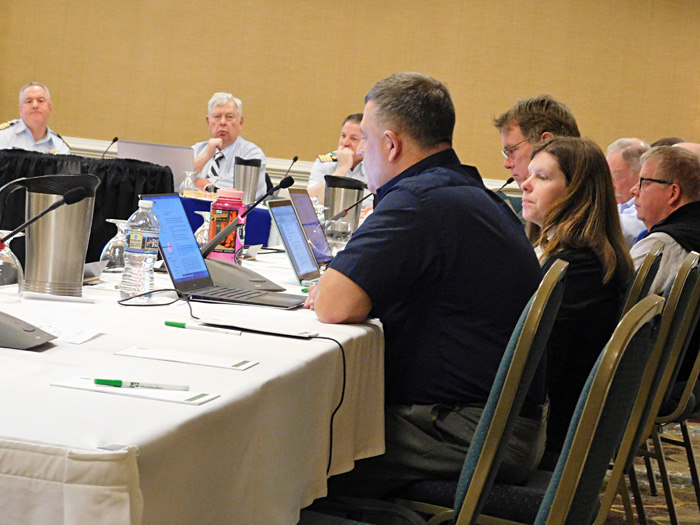 I took the photo above while Dr Marshburn (closest to camera) was presenting. It does a nice job of showing some of the major players during a thoughtful moment. Captain Boross is to the far left, then Chairman Maxim, then Captain Gifford. Rachel Johnson is looking toward Dr. Marshburn’s computer.

If you click on hte image above, you can see a larger, higher resolution image.

Captain Boross made some closing remarks. 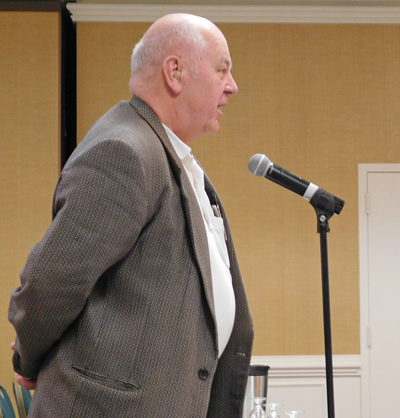 He asked Richard (Dick) Synder retired of Mercury to stand.

He asked Mr. Snyder why he continues to come to these meetings. (I think this is his 57th meeting)

Mr. Snyder said he spent 58 years at Mercury and now 17 years as a consultant for them.

The world of boating means the world to him.

He spoke of loosing a friend to drowning when the friend was 8 years old and having a cub scout funeral for him.

Captain Boross offered a quote, “Seek not to be heard, but seek to be worth listening too.” and he thanked Mr. Snyder for being here. He jokingly thanked him for providing the adult supervision to the other folks from Mercury and Brunswick on the Council that they so desperately needed.

Captain Boross asked me to stand.

He noted I came all the way from Oklahoma and asked me why I came.

I told him its great to be here. I had been here once before, not 57 times as my friend here has (referring to Mr. Snyder)

I told him it was in part due to my friend, Mr. Snyder.

Its great to be here, to see the organization, to see the safety work going, to see and understand in some of the struggles you have with regulatory issues and other things, and to meet some of the people involved. I’m here for that. I love that. I’m grateful to see the other aspects. As Mr. Snyder does, I worked in propeller safety strongly and have ideas in some of other fields that might be helpful and useful. Like life jacket wear and those kinds of things. Its great to be here. Thank you.

Captain Boross thanked me. He said he and his staff really appreciate my advocacy, persistence, and my communications with them.

He thanked me for being there to represent the SPIN cause issues that Marion is no longer with us, and Phyllis could not be with us this conveening.

Captain Boross then highlighted the members of the Council that are also members of the Coast Guard Auxiliary (Bruce Rowe, Dr. Marshburn, and one more, and encouraged others to do the same.

Captain Boross spoke on the status of NBSAC membership. Some came back this time to help when the next round had yet been appointed. There have been many more applications than open slots, plus it has been difficult to get those selected officially approved and appointed by the government. 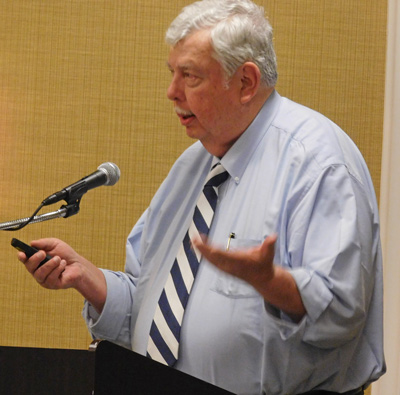 Chairman Maxim said we need more effective communications between meetings. Many files are too large for email, we need a DropBox type of thing and to be able to access a common database.

He mentioned Don Kerlin’s Initiative 3 for a centralized database, we can start from here.

We have to get better at outreach activities.

He noted Bob Sprague spoke some on how people make decisions and that is not always done rationally.

Dan Ariely at MIT talks about this in a TED talk he will show after the meeting. It’s about 17 minutes long.

Paddle craft will be handled by Prevention Through People, they will have a presentation next time.

We will have to deal with UI (Boating Under the Influence) one way or another and we should probably start with a paper that summarizes where we are. He will give a report on that at the next meeting and put it in a Power Point for them.

We need to get the “first team” for advertising support. He asked if anybody had an inside contact with a major league Madison Avenue type that could tell us how to sell Wheaties.

Philip Kotler was mentioned as being recognized as the father of social marketing, he’s cooperated with a lady named Nancy Lee that presented at NASBLA and at the Summit.

Chairman Maxim said, Captain Gifford wants us to be clever on our priorities plus a pocket list of things we hope for maybe even in the white area of the Venn Diagram shown on day 1, that are not hard to do, that we may be able to get done.

Chairman Maxim said NTSB is probably the premier safety agency. They wrote the Shared Waterways report. We need to give that report the respect it deserves.

During the opening session of NBSAC97 Chairman Maxim referred to a 2015 Venn Diagram showing the major areas in which fatalities occur and thus identifies the areas in which we should be focused. 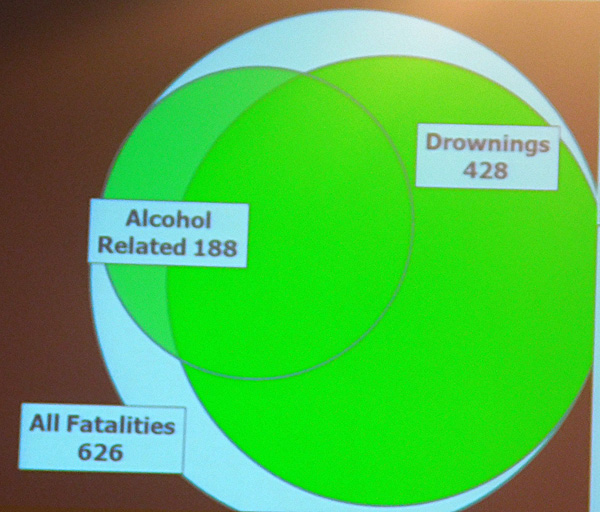 He wants future content to be in the Green or White areas of the Venn Diagram. A whole bunch of things come up at our meetings. Passionate people express issues. Somehow we have to get them into our priority order.

We also had a bunch of briefings, and he won’t name them, that were squarely in the blue area. That is outside of where we are.

He wants the Council to be more pro-active in structuring the content of these meetings so that we stay in at least the white area and at best in the green area.

He is concerned the existing regulatory stuff is not in the plan so he would like to craft the operational annex (includes the plan plus the daily stuff) into the strategic plan.

Chairman Maxim showed the Super Bowl commercial a few years back about herding cats in response to Dr. Ernie Marshburn’s efforts to hold the plan together. Everyone got a great laugh out of it, especially Dr. Marshburn.

Chairman Maxim ran through several parting pieces of advice / counsel, some are in the slide below. 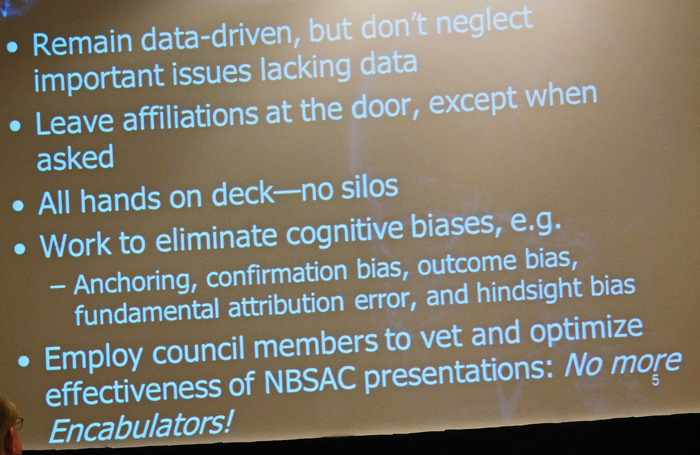 Chairman Maxim showed the video below about the encabulator mentioned on his slide above. It drew some laughs. It was a gobledy gook technical presentation using a whole bunch of big words with no substance. Meaning we should not give presentations like that one.

He talked about the Argentine organ donor PSA that was shot for free by a major firm.

He noted Argentina is now doing very well in organ donations per a journal.
Maybe we should beg and get a big firm to help us for free.

Chairman Maxim said we should value input, be alert for surprises, and dream big.

He showed a video of a young girl singing opera on Holland Has Talent as an example. We need to maintain high expectations.

girl on Holland Has Talent

NBSAC97 was concluded and adjourned.

END of part 5 of our coverage

Links to the meeting agenda and all 5 parts of our NBSAC97 coverage are below.

We welcome comments and corrections to our coverage of NBSAC97.