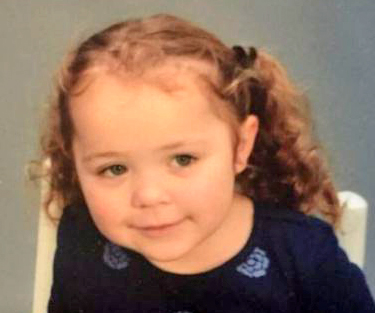 Katlyn Oliver, 4, was swimming behind a houseboat at Temple Lake Park, on Belton Lake near Fort Hood Army base in Texas.

On Monday 26 June KWTX reports Katlyn and her father were swimming back to shore after taking a ride in another boat. Katlyn was excited and anxious to tell others about her first boat ride. They were in about waist deep water in the area behind the houseboat.

Katlyn, wearing a life jacket, become entangled in a houseboat propeller as it was backing up. Her father, Patrick Oliver tried to rescue her. Both his legs were amputated.

Katlyn and her father were taken to Baylor Scott and White Hospital in Temple Texas. She died at 7:45 pm, about an hour after being struck by the propeller.

Early reports say Katlyn Oliver received multiple lacerations all over her body. An autopsy has been ordered by the Justice of the Peace, David Barfield, who also pronounced her dead.

Jason Stuart Bernal, a man associated with the houseboat, is being held at Bell County Jail on a third degree felony hold while authorities sort out any potential charges from this accident.
On Sunday 25 June, per multiple news outlets authorities said Mr. Bernal had been charged with criminal negligent homicide and bail had been set at $150,000.

Per a 26 June KWTX report, Mr. Bernal told authorities per an affidavit “from the captains position in the boat, he could not see behind him because the boat is three stories tall.” A witness told officers “the boat was in full throttle when backing up.” One witness that was with the father and daughter was shouting that people were behind the houseboat when it began to backup.

Temple Lake Park was closed for the investigation and will be reopened at some future time.

A GoFundMe account has been setup to fund Katlyn Oliver’s funeral and some of her father’s medical expenses.

The houseboat is said to be a 50 foot Gibson houseboat registered to someone who lives in Killeen Texas.

Gibson houseboats of this size tend to be powered by twin inboards with V drives and go faster than typical rental houseboats.

A later KCENTV image below shows investigators under the houseboat. The image indicates it is likely a twin inboard powered boat.

Katlyn’s father remains in the hospital and was to undergo another operation on Sunday 26 June. Doctors are striving to try to retain enough of his legs for prosthetics to be an option in the future.

The list of first responders included a dive team. That tends to indicate someone was entrapped on the propeller below the surface of the water or they were searching for missing limbs.

Lake Belton is a U.S. Army Corps of Engineers lake.

Back in 2010 we published an extensive report on a houseboat propeller safety regulation proposed and rejected by the Coast Guard.

We are used to seeing backover accidents involving slow moving rental houseboats. In those applications a cage type propeller guard is often put forth as a means by which the accident could have been prevented.

Propeller guards are seen by some as causing minimal issues on houseboats with maximum speeds of 10 mph or less in areas without weeds. If the Gibson houseboat in the photo printed by KTEM is the boat involved in the accident, it likely has a top speed in excess of ten miles per hour.