In December 2013 we published a report, Approaches to Prevent Outboard Motors From Flipping Into Boats After Striking Floating or Submerged Objects in which we identified several ways to prevent outboard motors from breaking off and flipping into boats after striking submerged objects. One of those was was active trim control (see pages 33-34 of our report) by using a magnetic fluid in the trim (tilt) cylinder and using position feedback (how far is the rod extended) during a log strike to adjust how much resistance the cylinder is applying to the upward swinging of the outboard. While the impacts are not as severe, the same approach is used for shocks on several cars.

Magnetic fluids are sometimes called Magneto-Rheological (MR) fluids. Also sometimes spelled as magnetorheological fluids. They change viscosity based on the presence of a magnetic field and upon its intensity.

Active control brings the ability to respond faster than existing systems and limit pressure overshoot today’s relief valves. It also provides the opportunity to measure the magnitude of the collision as it is occurring and then select the best way to respond or possibly to select one of several preprogramed ways to respond. One program could allow the outboard to rise up over the object before maximum resistance is applied (called trailover).

MR fluids are also currently used in some high end, rough water vessel chairs to dampen vibrations (protect your back in very rough water) for the U.S. Navy.

In January 2015, Brunswick filed a patent on this active trim cylinder approach that includes some interesting comments. 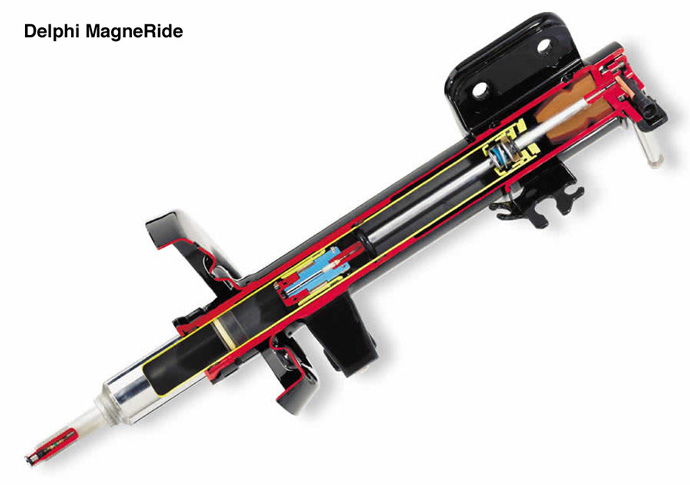 Delph Magneride image PropellerSafety.com posted with our discussion of using MagnetoRheolopical fluids in trim systems in 2013.

Brunswick obviously developed the approach much further than our one page discussion, including sketching out a system and describing it in detail.

However, I would note Brunswick’s independent claim #1 upon which all the other claims depend, except for independent claim #24, seems like it would struggle from obviousness to me given the page we published a couple years before they filed their patent.

We are not saying their patent is invalid, however we are saying we published the basics of the invention before Brunswick filed the patent and the examiners would not have issued claim #1 of this patent IF they had seen our report AND IF they felt Brunswick’s claim was an obvious extension of our prior art.

In real life, (1) if the examiner had seen our materials during the examination and (2) thought claim #1 was obvious in light of our materials, (3) Brunswick would have been given an opportunity to rewrite their claim #1 in a manner that would not be objected to by the examiner.

The other independent claim, claim #24, looks to us like it would struggle on obviousness based on our report as well. Claim #24 is basically a “method patent” for device described in claim #1. But it does not matter what we think, its what the examiners think that is important.

We note that if other firms are interesting in bringing this device to market, they might be able to invalidate Brunswick’s patent based on our prior art.

So much for all that, we are glad Brunswick invested in the concept, further developed it, and prosecuted the patent. We hope they or others bring the device to market.

Note to To Brunswick: Next time please cite us in the references. This is not the first time you have not cited our prior art when it was highly relevant to one of your patents.

Back to Brunswick’s Patent Itself

The active trim cylinder device looks like a normal trim cylinder. It just uses Magneto-Rheological (MR) fluid instead of oil, plus the system includes a magnet, and some wires. In able to take full advantage of the opportunities provided by a trim system using MR fluid, it also includes additional sensors and utilizes the Engine Control Unit (ECU) to gain access to computing power and even more variables. By knowing how far the cylinder is extended, engine RPM, what gear the transmission is in, engine load, boat speed, and the pressure in the cylinder, much smarter decisions can be made in how to react to current conditions, especially during a log strike. The patent sometimes refers to log strikes and similar events as “over pressure events”. 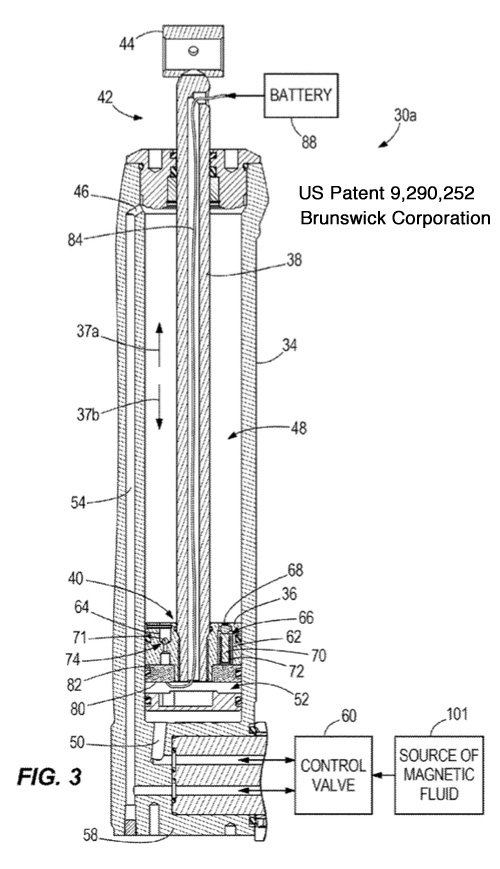 The Engine ECU and potentially other computer power plus pre computed MAPS of best responses to certain conditions can optimize the response of the tilt cylinder, especially during collisions with floating submerged, or fixed objects. Plus the system can better respond to hard running in rough water (read bass tournament fishing conditions when the boat is sometimes airborne), and in reverse where the system can make sure the drive does not tilt up during reverse (they call it reverse thrust lockout).

Brunswick / Mercury wants the drive to stay in place (not break off AND remain in the same trim position) when boats go airborne like those in the Big Air photos below taken by Shaye Baker for Bassmaster and the 2015 Bassmaster Classic in on Grand Lake near Tulsa Oklahoma. The trim system takes a large shock load when the drive re-enters the water. 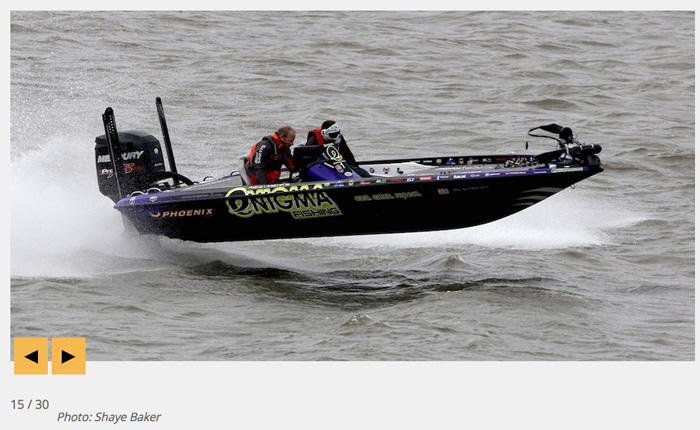 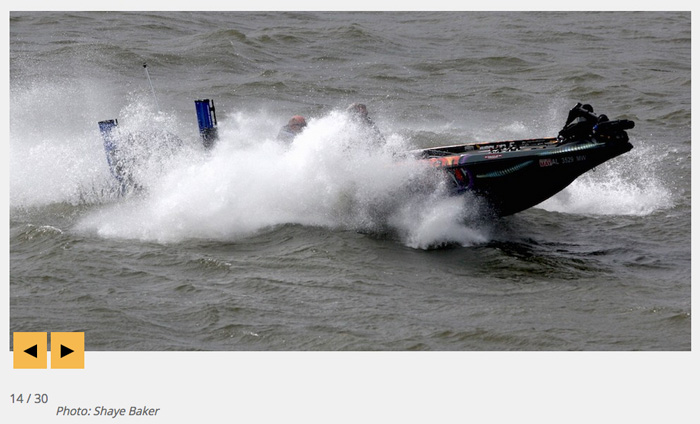 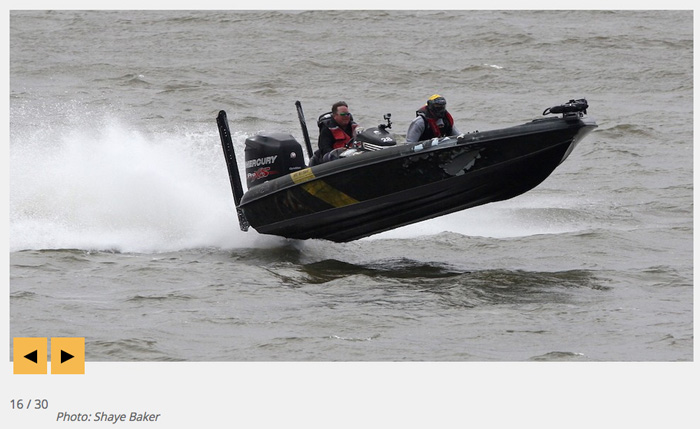 The chart below shows how the ECU can capture many variables important to optimally handling a log strike event and program the best response. 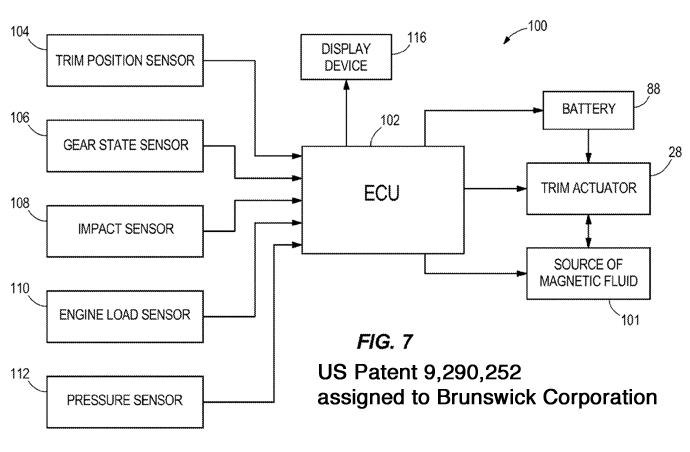 Figures 5 and 6 of the patent teaches the possible use of a piezoelectric proportional valve #90 to replace the relief valves normally associated with tilt cylinders. The control system regulates the piezoelectric valve to maintain the desired pressure as the tilt cylinder rod extends during a log strike.

In one example, the fluid entering the check valves and the fluid exiting the relief valve could be routed through “circuitous path through the electromagnet 80.” In another example, that path could be straight.

Another interesting part of this patent, is Brunswick talks about being able to anticipate an impact by using sensors.

Anticipating Impacts Before They Happen

The underwater impact sensor, item #108 in the patent, “is configured to sense an impending impact and communicate this information to the engine control unit. Based upon this information the engine control unit can be configured to reduce the amount of voltage to thereby allow increased elasticity of the trim actuator which permits easier pivoting movement of the marine propulsion device and thus limits damage thereto during collisions with underwater structures such as logs, rocks and/or the like.”

The chart below outlines Brunswick’s plan to anticipate impacts and be ready for them before they happen. 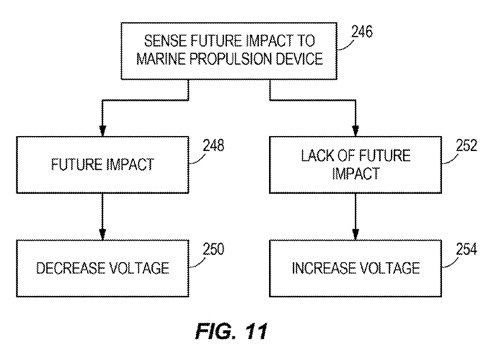 The patent says the impending impact sensor “can vary and can include, for example, a conventional sonar system, laser system, and/or the like.”

We would certainly be interested in learning if Brunswick had actually done any work in detecting potential impacts before they occur. We have studied this area before and most of the existing work has been done with hydrofoil ferries. Hitting a large log, often a deadhead (vertically floating log) with a hydrofoil can be very dangerous to the crew and passengers on board, and to the vessel. We have several studies in this field in our archives.

There appears to be a typo in column 7 of the patent about midway down the page where it says, “Movement of the trip actuator 28”. The patents is likely supposed to say “trim” not “trip”. It is extremely easy to allow typos to creep into patents. For example, there are likely several on this page. But the text and language of patents, and especially of their claims, can be very crucial if the patent is challenged.