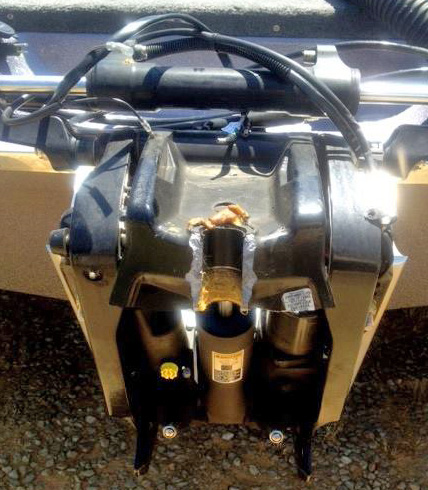 Driveshaft housings (the lower leg of the outboard) sometimes fail during log strikes.

The very basics of what happened is Mercury found that small quantities of Strontium could make certain aluminum alloys more durable, allowing parts made from them to stretch more before incurring a permanent set which allowed their structural parts (like swivel brackets) to absorb more energy during a collision with a submerged object before failing. These alloys were not just more durable, they were more durable at high strain rates (when a load was applied very quickly such as during a crash). Thus Mercury was able to raise the speed at which their components would fail in some collisions.

In addition to increasing durability of Mercury’s parts, the specific blends of elements used by Mercury in their new alloys brought along some other good features as well, like fewer issues with porosity.

These two new Mercury alloys went on to be known as:

Most major manufacturers of marine drives run one or more special blends of aluminum to achieve the qualities they desire specifically including reducing corrosion and being compatible with their molding process (die casting, lost foam, low pressure lost foam, etc.) For example, Yamaha uses an alloy they refer to as YDC-30.

The history of Mercury patenting their two new alloys is told below.

Raymond Donahue, Terrance Cleary, and Kevin Anderson were listed as inventors on both patents.

Getting a patent through the system is called prosecuting the patent.

The first thing we noticed from the data above is, we are used to seeing something of the nature of a 2 year issue time for most patents. If they are not issued in a couple years, there is likely a considerable discussion going on in the background between the patent examiner and the individual or firm applying for the patent. One of these patents took 5 years!

I looked at Public PAIR (a place we can see some of the discussions going on with the patent examiner) and found these were seen as very important patents by Brunswick. They paid additional funds for them not to be publicly posted online 18 months after they were filed. The patents include a large number of claims, including several independent claims. In modern times we are allowed 3 independent claims (claims not written as being dependent up on another claim), and a total of 20 claims for the basic patent fee. Over 20 claims or over 3 independent claims results in increased filing fees.

The U.S. Patent Office typically initially rejects many to most patent claims. They force the inventor to explain why their patent is different from specific patents that have already been granted.

This time the Patent Office was pretty thorough. The 7,666,353 patent survived 4 Non-Final Rejections and 1 Final Rejection. Two affidavits (9/16/2009 and 5/20/2009), an amendment, and telephone interviews were used to keep it alive. The examiner eventually agreed there was a connection between the claims and some unexpected results, meaning the alloy was not an extension of prior art.

After going around and around with the patent examiner, Dr. Raymond J. Donahue, Mercury aluminum casting expert and listed among the inventors on this patent, wrote an affidavit dated 20 May 2009. The 19 page affidavit submitted by Mr. Donahue details his qualifications, then goes into great detail about how this particular alloy differs from the Vader ‘110 patent (U.S. Patent 5,045,110 assigned to Shell Research). Submissions included test data, grain size measurements, and dendrite arm spacing measurements. Donahue says the Vader ‘110 patent is a master alloy, something added molten metal to make an alloy, it is not an alloy itself. Brunswick / Mercury makes a very extensive technical argument for why they think this patent should be issued, even though the patent office says the Vader “110 patent already covers many of the claims made by Mercury.

Mercury was able to get some claims past the examiners, but the claims that issued were very specific (businesses want broad claims).

The first and seventh claims, the independent claims, define the chemical composition of the alloy and limit it to being cast in a lost form process with about 10 atmospheres of pressure.

Its very clear, Mercury thought these patents were very important. They expended considerable funds, time, and effort in trying to get them issued.

Our interest in these two patents comes from their use in casting log strike system components (drive shaft housings, swivel brackets). The following text is replicated in both patents:

An outboard assembly consists of (from top to bottom, vertically) an engine, a drive shaft housing, a lower unit also called the gear case housing, and a horizontal propeller shaft, on which a propeller is mounted. This outboard assembly is attached to a boat transom of a boat by means of a swivel bracket. When the boat is traveling at high speeds, a safety concern is present if the lower unit collides with an underwater object. In this case, the swivel bracket and/or drive shaft housing may fail and allow the outboard assembly with its spinning propeller to enter the boat and cause serious injury to the boat’s operator. Thus, it is a common safety requirement in the industry that an outboard assembly must pass two consecutive collisions with an underwater object at 40 mph and still be operational. Further, as the outboard assembly becomes more massive, this requirement becomes more difficult to meet. As a result, it is generally accepted that outboards having more than 225 HP have problems meeting industry requirements particularly if the drive shaft housings are die cast because of the low ductility and impact strengths associated with conventional die cast AlSi alloys. Accordingly, it would be highly advantageous to be able to die cast drive shaft housings with sufficient impact strength so that the drive shaft housings could be produced at a lower cost. Similarly, it would be advantageous to manufacture gear case housings and stern drive Gimbel rings for these same reasons.

Mercury Marine now maintains a page with several details on each of these new alloys available from tabs under the name of the alloy.

This is a little known way by which to help prevent outboard motors from breaking off and flipping into boats. Alternate materials for outboard motor structural components such as steel or stainless steel have been previously suggested, but their weight becomes excessive and they are not easily formed into complex shapes. Changing the blend of an aluminum alloy to achieve improved collision performance is a great idea.

Comments by Angler with Broken Swivel Bracket Above

Rex Chambers, the bass tournament pro angler involved in the collision resulting in the broken Mercury swivel bracket photographed above published a video on the fourth anniversary of his collision in which he graphically shows what can go wrong when swivel brackets break (people hit by the outboard and propeller). He goes on to tell about how he now runs a tether (The Leash) to prevent such accidents.