In a 31 August 2017 press release, Mercury Marine announced they were donating ten inflatable boats and thirty 6 horsepower outboards to Hurricane Harvey relief efforts. They noted they also donated a 40 horsepower outboard motor to Boots on the Ground, a non-profit veterans organization assisting veterans and qualified civilians in providing assistance on the ground in disasters.

A big thanks to Mercury for their efforts to help our brothers and sisters in their time of need.

FOND DU LAC, Wis. (Aug. 31, 2017) – Mercury Marine, in an effort to help in the recovery mission in the wake of Hurricane Harvey, has donated multiple boats and engines to the affected areas. This week, Mercury deployed 30, 6hp outboard engines as well as 10 inflatable boats to be sent to the command center in Texas. In addition, the company donated a 40hp outboard engine to Boots on the Ground, a non-profit organization dedicated to empowering veterans and qualified civilians to provide in-field emergency and primary medical care.

The state command center in Texas has also identified the scarcity of life jackets. In response, Mercury owned Land ‘N’ Sea has rushed 100 life jackets to Houston from some of its Shreveport, Louisiana warehouse. Mercury will continue to work with the local command center to help support the recovery effort.

This effort is part of a Brunswick Corporation wide effort that has involved contributing boats, equipment and materials from brands such as Boston Whaler Commercial Government Products, Lowe Boats and others.

“Our thoughts and prayers go out to everyone who has been impacted by Hurricane Harvey,” said John Pfeifer, Mercury Marine president. “There is a need for boats and engines in the recovery efforts and we will do whatever we can to help with those relief efforts.” 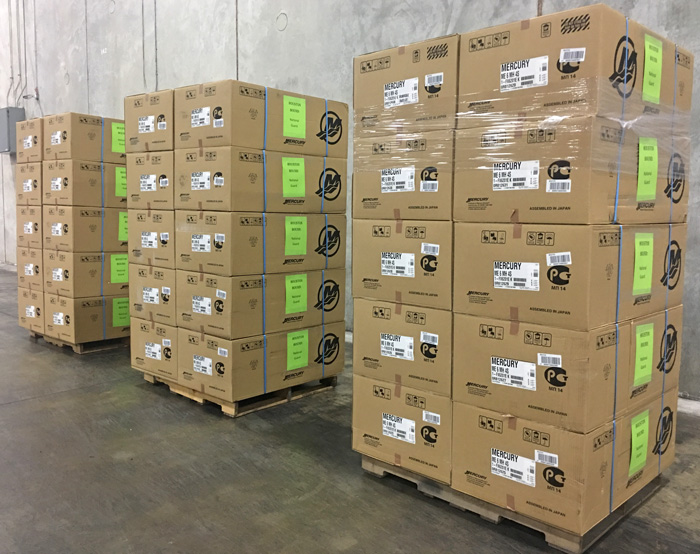 In addition to this direct effort by Mercury, we suspect many Mercury dealers and their employees are directly involved in the relief efforts as are many Mercury powered vessels we see on the news media.

The three 4.7-meter inflatable boats will be operated by first responders and local law enforcement in Texas and will aid in search and rescue missions where flooding has forced thousands from their homes.

“Our hearts and full support go out to the communities impacted by Hurricane Harvey,” said Boston Whaler President, Nick Stickler. “We hope this small gesture will assist with relief efforts in the unprecedented aftermath of Hurricane Harvey and the tropical storm that continues to dump rain on coastal Texas.”