Quick Description of This Invention

This invention proposes using technologies similar to those already patented by Suzuki and Brunswick to record log strikes, share that data anonymously, then create crowd sourced maps/ charts of the aggregated impacts. These crowd sourced maps could be printed paper maps as well as displayed on onboard navigational displays or other electronic devices.

In June 2013 Suzuki was awarded Japanese Patent JP2013123954(A) “Device, Method and Program for Controlling Collision of Outboard Motor”. Suzuki’s patent describes a system that detects log strike impacts and records impacts including tilt, the change rate of tilt, GPS speed, and other variables during an impact.

Suzuki detects impacts by monitoring rate of change of tilt. When rate of change of tilt exceeds a certain value, an impact is detected. They also monitor tilt to make sure the tilt changed a certain amount at this time meaning it was a significant strike and not just a quick small change. Suzuki mentions inputing boat speed to the system via a GPS signal. It also looks like they detect the engine over revving when the propeller leaves the water as another indicator of impact. Engine speed may be reduced or stopped during impacts. Boat operators are notified of impacts. In more severe impacts the boat operator may be notified the marine drive should be inspected. 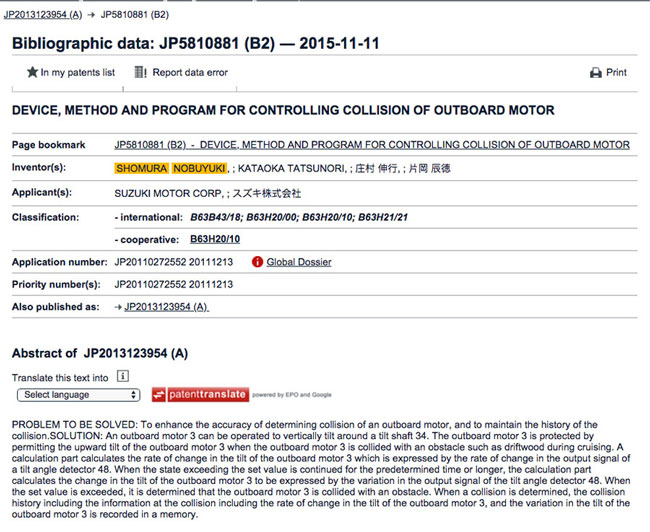 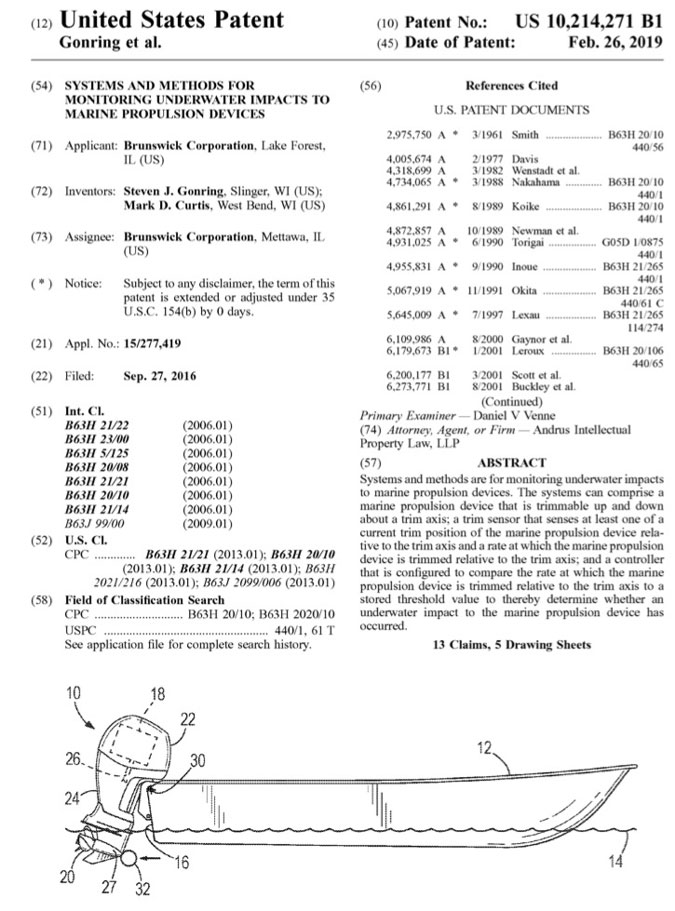 Suzuki and Brunswick/ Mercury Marine’s systems describe capturing data during log strike impacts and storing that data for future using including estimating the remaining life of a drive, suggesting the drive be brought in for maintenance, summing the impact forces on a single drive from multiple impacts, etc..

Additional Data of Interest to Us

Recording some additional bits of data could make the data even more useful. Such as the date, GPS location, and boat speed (which Suzuki does).

It is our understanding that Brunswick is working on or already has Engine Control Modules (ECM) in which data can be stored about the boat (boat type, length, weight, etc) and its primary use (ski, fish, runabout, etc) before the boat leaves the dealership. They use this data to optimize the engine’s control system (Electronic Control Module / ECM) for the engine’s intended purpose. This same data could be imported into the log strike impact monitor making the data collection even richer.

Theoretically everybody running an outboard with impact monitoring could opt to anonymously share certain parts of their impact data with others (such as GPS location, impact severity, and date). Shared maps could be generated showing where and when (seasonally) these impacts are most likely to occur in certain lakes allowing boaters to be extremely careful in those areas. The system could work similar to the current shared bottom mapping programs available from some fish finder vendors (sometimes call crowd sourced maps or Social maps).

2. Utilization of additional data that could be collected by log strike monitoring systems such as the date and GPS location of log strike impacts in geographical maps.

4. Mapping impact data from Claims 1,2,3 above in manners useful to boaters and others with a need for this data.

5. The use of crowd sourcing to voluntarily submit individual marine drive log strike impact data anonymously to an accumulator for the purpose of mapping the data.

6. Maps from such data including individual lake maps, regional maps, state maps, and national maps of this data.

7. Data displayed could be all data or data from certain periods of time such as last year, this year, a certain season of the year, etc. Those familiar with these systems will recognize this process as “filtering” the data.

8. Data could be displayed on printed maps or provided in digital format.

10. Electronic / digital displays could be stand alone systems (supply map plus the data) or could be integrated as layers to existing navigational displays, GPS displays, fishing maps, chart plotters, etc.

12. Data could be geographically presented in a number of ways such as the examples below:

12A. Areas with different log strike frequencies could be color coded like in population density maps on a given lake. 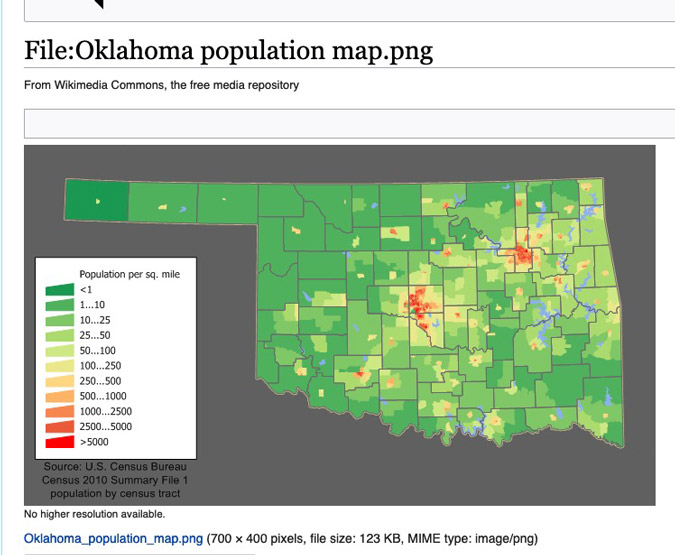 12B. Individual log strikes could be entered into an interactive portal providing multiple ways of interacting with them, such as filtering them to select specific ranges of data, or individually clicking on a single dot to obtain additional data on that specific incident such as in the Chicago Homicide Portal. The Chicago Homicide Portal is particularly interesting as one might wish to avoid areas with multiple dots indicating homicides. Similarly, a boater might elect to avoid areas with multiple dots indicating log strikes or at least pass through that area at a reduced speed.

12C. Data on specific sites with more frequent impacts could be provided such as in this high frequency auto collision data site. 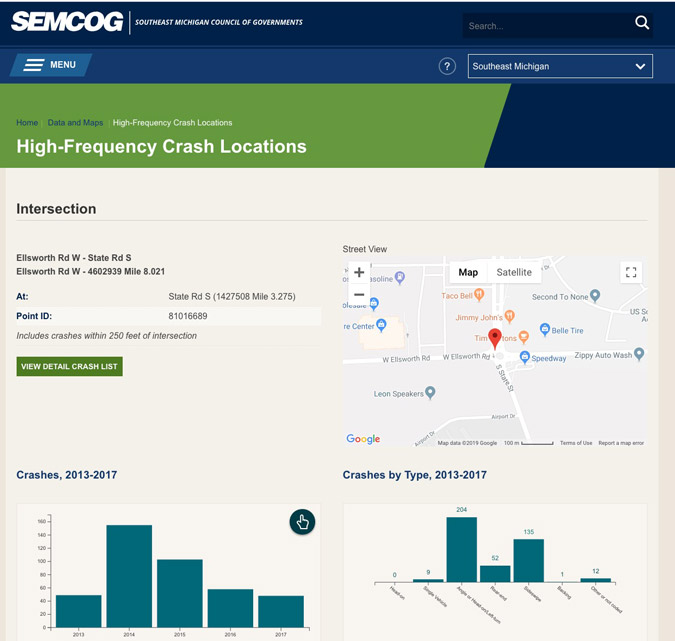 12D. In a format compatible with navigations displays so the data could overlay existing maps or current sonar displays such as this iBoats chart. 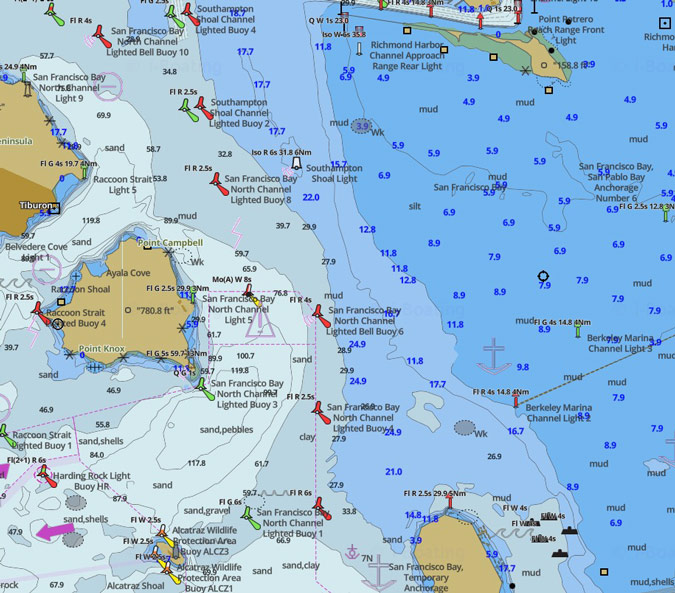 12D. Using any other charting technique.

14. Using the data in Claim 13 to further enrich the charts described above.

15. Use of SD cards, thumb drives / usb flash drives or similar storage devices in log strike monitoring systems for the purpose of allowing individuals to remove or copy log strike impact data, download their data to a computer, then upload (share) their data. For example, some crowd sourced lake bottom mapping programs rely on downloading recorded chart data to an SD card, uploading it to a computer, then sharing it online with a map integrator such as CMap.

16. Direct integration of the systems described above with current or future crowd sourced navigational chart mapping systems. Such as making recording the outboard motor data in manner in which it could simultaneously be downloaded with crowdsourced mapping data and uploaded at the same time.

17. Providing the maps / charts described above to improve safety of boat operators by identifying areas in which log strikes are more frequent. Boaters can then use additional caution in those areas.

18. Providing the maps / charts described above so organizations can use the data to make their waters safer by removing permanent hazards and marking the most frequent log strike impact areas as appropriate.

19. Providing the information / charts described above so dredge pipe hazards can be more quickly identified and mitigated.