Michael Broussard was bass fishing on Toledo Bend Reservoir with his father in 2018. Michael was operating the boat and failed to connect his kill switch lanyard.

In April 2019 he posted an on vessel video of the event in multiple resolutions on YouTube.

The bass boat was running a Yamaha VMAX 250 outboard motor.

It looks like the event begins about 47 seconds into the video when the operator veers hard left to avoid a small vertical white buoy marker. Then both men are ejected out the operators side of the boat (out the right side).

They were ejected at about 57 miles per hour. The video indicator said they experienced a peak of about 3 g’s. We anticipate it was an omni directional accelerometer reporting the greatest acceleration in any direction. If so, if they weighed 180 pounds, it would be as if a 540 pound force was instantly trying to keep their body going the same direction. Also note acceleration was measured at the point of the device (likely a GoPro camera) not at the point the men were sitting.

There are several “firsts” in this video including:

Also of interest was the speeding up of the boat in the Circle of Death from about 10 mph to about 30 mph at about 2 minutes and 10 seconds into the video. A close look at that time reveals the drive quickly trims back down as it speeds up. It is as if the drive got stuck at a higher trim during the “incident” and something happened, tripping it to fall back down. The earlier slower speed was due to the propeller likely not being fully submerged. Note the “rear” camera is visible mounted on the top of the outboard motor.

The proximity of those in the water to the circling vessel was scary, especially when it was about to speed up (maybe to a bigger circle).

Michael survived and took the opportunity to encourage everybody to always connect their lanyard.

We are glad to learn they were not seriously or fatally injured.

A huge thanks to Michael Broussard for sharing this video online. As he does, we encourage all to connect their kill switch lanyard when underway. 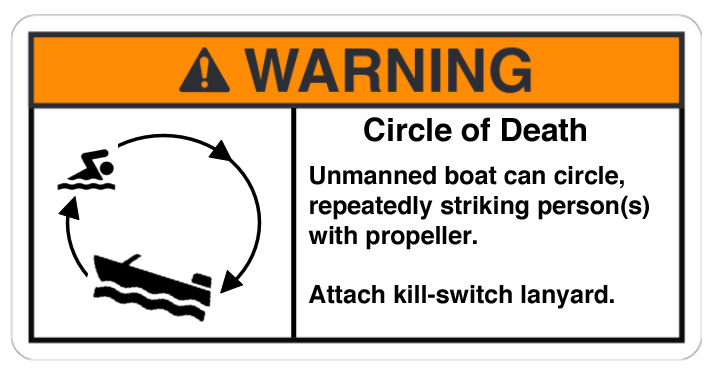 Plus an obvious big thanks to all who helped rescue Michael and his father that day on Toledo Bend Reservoir.

Note- we do not recommend actions taken near the end of the video in which Michael attempts to reboard the boat still in the Circle of Death. We strongly urge that decision and any resulting actions be left to on water law enforcement professionals. Authorities may try a number of approaches including just letting the vessel run out of gas.

Many talk about or think about being slung out of a boat in the Circle of Death. In the real life videos available to date, the boat running at speed veers sharply to one side or the other, the mass of those onboard just keeps their body going on down the lake or river the way they were going before the veer. It is not like they rode the boat around the circle a ways and were thrown out. They are ejected initially before the boat substantially enters the circle.

It is also interesting to see two people flying out the same side again. At times in the past some marine law enforcement professionals have said that was not possible.

Note – as we have previously mentioned, with the proliferation of GoPro type cameras, especially those mounted onboard bass boats, it is only a matter of time til one of these videos does not have a happy ending. Please always attach your lanyard and prove us wrong.