Sensor Based Detection of people near boat propellers: Patents

With increasing activity in the use of sensors to detect people at risk of being struck by a boat propeller we decided to try to bring most of the relevant patents on the topic together in one location.

In the instance of this post, we will only be referring to patented approaches using sensors to detect the presence of people in the water at the stern / behind the transom of a recreational boat. Those in the water may include swimmers, floaters, those on tubes, those on or at the swim ladder, water skiers, wake boarders, wake surfers, those standing in shallow water near the vessel, those riding a PWC, those in a Kayak or Stand Up Paddleboard (SUP), people being rescued, or any other conveyance or activity that may place people in the water behind the stern of a recreational power boat within a distance of about 10 feet of the boat propeller. Patents listed below may not cover the entire range of applications or distance described above.

The Volvo Penta image below is an example of these types of patents. 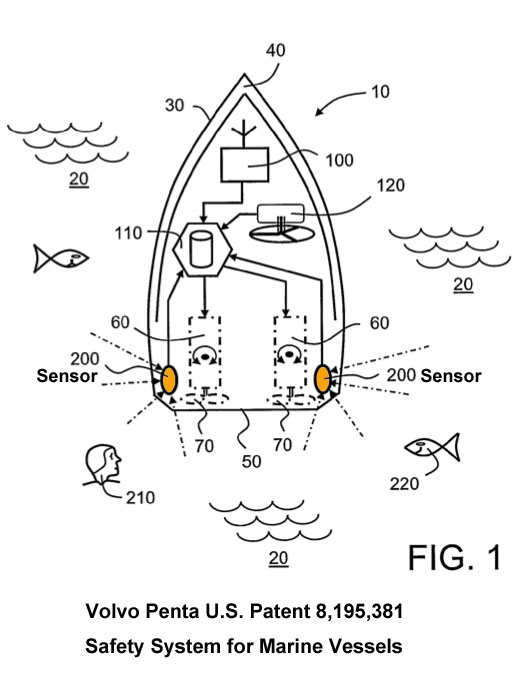 Sensor Based Detection of People Near the Propeller

We Encourage Further Development in This Field of Boat Propeller Safety

We hope that by bringing these patents together, others will be encouraged to continue developments in the field of Virtual Propeller Guards using sensors to detect the presence of humans / people / swimmers near recreational boat propellers. We thank those already working in this field and encourage others to join in the effort as well.