For decades the boating industry has been raising what we call the Jones Act Defense against plaintiffs on large lakes and waterways, especially those through which one could theoretically pass to another state.

Back in 1851 the U.S. Government adopted the “1851 Shipowners Limitation of Liability Act” to encourage shipping by limiting the potential liability of a merchant vessel to the value of the ship plus its contents. Thus if the merchant vessel was involved in some sort of collision, a large multi vessel fire, knock down a bridge resulting in multiple fatalities (like happened here in Oklahoma a few years back), strike a public walkway (like the Riverwalk in New Orleans several years ago), or other catastrophe on a navigable waterway its owners could only be sued for the value of the vessel plus its contents. Many states add qualifiers that the vessel must not have been operated in a negligent manner to receive such protection.

The 1851 Shipowners Limitation of Liability Act also protected ship owners in the event their vessel sunk or caused some other vessel to sink in an important shallow channel and required great expense to remove it so shipping could proceed.

The definition of navigable waterways is open to interpretation, but generally understood to be waterways carrying cargo/commerce/passengers from one state to another.

Back on July 9, 2018 a DUCK boat tour boat sunk in rough water and winds on Table Rock Lake near Branson Missouri claiming 17 lives. 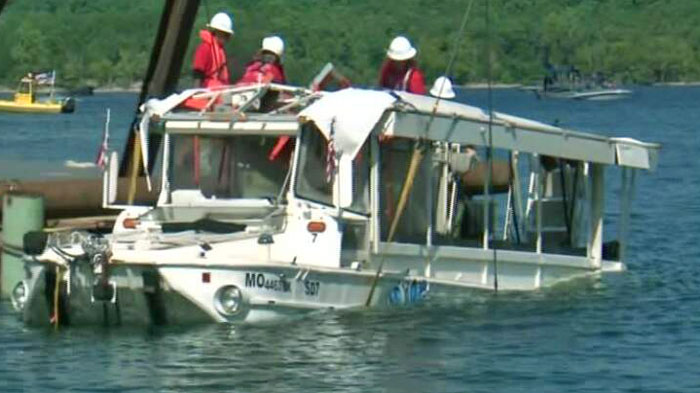 The moment we learned of the Branson accident, I knew the Jones Act defense would be raised and would be met with boos and jeers from the families involved.

At least in this instance the vessel involved was a commercial vessel. Recreational boat builders often raise the same defense.

In the instance of the Branson Duck Boat case, the defendant took an especially low road. They tried to claim the value of their vessel was its value at the bottom of the lake which they said was zero vs. its value immediately before it sank which could have been at least in the tens of thousands of dollars, still a pittance to balance 17 lives against.

The judge considered the Jones act claim for over a year.

Per Springfield New Leader on 2 December 2019,

U.S. District Judge Doug Harpool mulled the issue for more than a year before deciding Friday that the old maritime law does not apply and Table Rock Lake is not a “navigable waterway” under federal law.

In his order, which was issued Friday, Harpool cited two major reasons why the Limitation of Liability Act did not apply. First, Harpool wrote that Ride the Ducks International was not the owner of the Stretch Duck 07 vessel at the time of the sinking. Secondly, Harpool wrote that Table Rock Lake is used for recreation and tourism and does not meet the traditional criteria of bodies of water that are subject to admiralty jurisdiction.

1n 1920 the Jones Act was implemented. All vessels carrying goods from one U.S. point to another U.S. point were to be U.S. made and operated under the U.S. Flag. The idea was to maintain our shipbuilding abilities and merchant marine capabilities in the event of war.

If a seaman was injured, vessel owners would cite the Limitation of Liability Act in 1851 to limit their liability.

How Does The Jones Act Apply to Recreational Vessels

Recreational boat builders almost always loose their claim to Jones Act protection, but it wears down the plaintiffs before the real case ever begins.

If the boating industry can force plaintiff’s to move over to Admiralty Law in Federal Court by claiming the accident happened in navigable waters, in addition to access to the 1851 shipowners limitation of liability act, many of laws and procedures are different than most attorneys are used to. This gives the boating industry a substantial advantage. That is why you see many plaintiffs moving the case from Federal jurisdiction once the judge rules the Jones Act defense does not apply in their particular case.

High profile propeller injury or fatality cases in which the Jones Act has been raised in recent years include Barhaovich, Angelopoulos, Germain, and DJ Laz.

In one instance (Craddock) a person struck by a very valuable boat attempted to turn the tables and gain access to the vessel by placing a lien on it. (If the defense is going to limit their liability to the value of the vessel, fine I will take your boat.)

Interestingly, back in 1974 Missouri Law Review published a paper titled, Tort on Inland Waters–Admiralty Jurisdiction, by William P. Cronan. That paper ends with this conclusion:

The Missourian who operates a pleasure boat on the Lake of the Ozarks or any other navigable water of the United States and who is involved in a maritime accident may discover that he and his attorney are involved in a lawsuit that neither really understands. The attorney may find himself concerned with legal principles with which he is totally unfamiliar.

An injured party may discover that his injuries will be largely uncompensated because of the Limitation of Liability Act.

The party at fault may discover that the contributory negligence of the plaintiff will not relieve him of liability.

In short, things can be different.