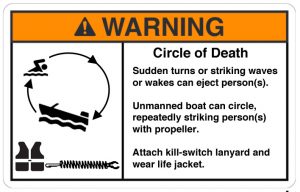 WASHINGTON – Operators of recreational vessels less than 26 feet in length will be required to use an engine cut-off switch (ECOS) and associated ECOS link (ECOSL) as of April 1, 2021, as the U.S. Coast Guard implements a law passed by Congress.

The ECOS and ECOSL prevent runaway vessels and the threats they pose. The ECOSL attaches the vessel operator to a switch that shuts off the engine if the operator is displaced from the helm. The ECOSL is usually a lanyard-style cord that attaches to an ECOS either in close proximity to the helm or on the outboard motor itself if the vessel is operated by a tiller. When enough tension is applied, the ECOSL disengages from the ECOS and the motor is automatically shut down. Wireless ECOS have recently been developed and are also approved for use. These devices use an electronic “fob” that is carried by the operator and senses when it is submerged in water, activating the ECOS and turning the engine off. Wireless devices are available on the aftermarket and are beginning to become available as manufacturer-installed options.

Each year the Coast Guard receives reports of recreational vessel operators who fall or are suddenly and unexpectedly thrown out of their boat. These events have led to injuries and deaths. During these incidents the boat continues to operate with no one in control of the vessel, leaving the operator stranded in the water as the boat continues on course, or the boat begins to circle the person in the water eventually striking them, often with the propeller. These dangerous runaway vessel situations put the ejected operator, other users of the waterway, and marine law enforcement officers and other first responders in serious danger.

Section 503 of the Coast Guard Authorization Act of 2018 required manufacturers of covered recreational boats (less than 26 feet in length, with an engine capable of 115 lbs. of static thrust) to equip the vessel with an ECOS installed as of December 2019. Owners of recreational vessels produced after December 2019 are required to maintain the ECOS on their
vessel in a serviceable condition. It is recommended that recreational vessel owners regularly check their existing ECOS system to ensure it works, following manufacturer’s instructions.

Section 8316 of the National Defense Authorization Act of 2021 requires individuals operating covered recreational vessels (less than 26 feet in length, with an engine capable of 115 lbs. of static thrust; 3 HP or more) to use ECOS “links.” Using the ECOSL is required only when the primary helm is not within an enclosed cabin, and when the boat is operating on plane or above displacement speed. Common situations where ECOSL use would not be required include docking/trailering, trolling and operating in no-wake zones.

The Coast Guard believes that the overwhelming majority of recreational vessels produced for decades have had an ECOS installed, so this new use requirement simply obligates recreational vessel operators to use critical safety equipment already present on their boat.

Boaters are encouraged to check the U.S. Coast Guard website for additional information on this new use requirement and other safety regulations and recommendations:
https://uscgboating.org/recreational-boaters/Engine-Cut-Off-Switch-FAQ.php

This specific law will only apply to Federal Waters.

We (PropellerSafety) also refer you to our January 16, 2021 post titled, Coast Guard to require use of kill switch lanyards on Federal waters

ECOSL stands what attaches to boat operator to the switch that shuts to vessel off if the operator is away from the helm. Traditionally it is a lanyard. Wireless lanyards / virtual lanyards also exist and are approved for use.