On June 30, 2012 Mr Feasel and Mr Martinez were fishing. They were in a Tracker bass boat powered by a Mercury Marine outboard motor on a Utah reservoir. The boat swerved and both men were ejected. The unmanned boat circled in the Circle of Death. Mr. Feasel, the passenger, was repeatedly struck the propeller. 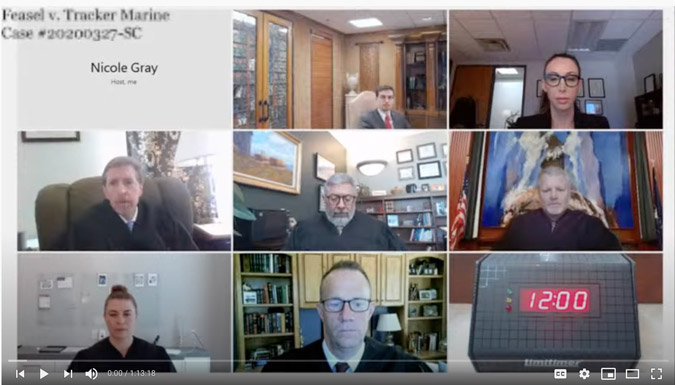 While additional issues were raised in the legal case arising from this accident, this post purely focuses on warnings.

The video above shows a bass boat ejection and the subsequent Circle of Death along with GoPro gauges showing speeds and circling.

Very basically, some declarations were excluded by the court, and as a result, summary judgement was awarded to the defendants, Brunswick & Tracker.

Very basically, Utah Court of Appeals ruled the declarations in question should not have been excluded.
The Court of Appeals also ruled “genuine issues of material fact remain, specifically with respect to the adequacy of the warnings, whether Martinez and Feasel had actual knowledge of the specific danger that would result from not wearing the killswitch lanyard, and whether the failure to warn caused Feasel’s injuries.”
Thus they remanded the case back to Utah District Court.

Brunswick and Tracker appealed to the Utah Supreme Court. Their appeal focuses on duty to warn issues, and more specifically on (1) the required specificity of those warnings, and (2) duty to warn the passenger.

Utah Supreme Court will render their verdict at some future time.

Potential Implications of the Feasel Case