Without an estimate of the total number of propeller accidents, injuries, and fatalities it is difficult to decide how best to address the problem. This same problem exists in accident frequency studies in automobile crashes, industrial accidents, and other fields. We propose encouraging students searching for Senior Design Projects, Capstone Projects, Sr. Thesis, Masters Thesis, and similar projects to consider applying the techniques used to estimate actual accident frequencies in other fields (like automobile injuries and fatalities) to recreational boat propeller accidents.

We will begin by supplying some information on previous under reporting of propeller accident studies, discussing techniques used to estimate the actual number of accidents in other fields of study, describing the accidents currently NOT included in USCG’s BARD database, and conclude by supplying some references.

Previous Studies of Under Reporting of Propeller Accidents

We cite several previous studies on our Accident Statistics page in the Under Reporting of Accidents section.

How Other Fields Have Estimated the Number of Unreported Accidents

There are five basic strategies. Three of these strategies have previously been applied to recreational boat propeller accidents.

To our knowledge, the remaining two strategies have not been applied to recreational boat propeller injuries. These are the strategies we are proposing for Senior Design Projects, Capstone Projects, Masters Thesis and similar projects.

Issuing the Charge to Student Researchers

We are asking engineering, design, statistics, mathematics, and safety students to consider one or both of the approaches below as a Senior Design Project, Capstone Project, Senior Thesis, Masters Thesis, or similar project.

Project 1. Compare the results of two or more independent databases of propeller accidents, then use statistics to estimate the total number of accidents. Additional information on this approach is in the references near the bottom of this post. Independent databases could include:

A comparison study of independent databases including USCG’s BARD might best be done by focusing on injuries and fatalities separately. With an accident more likely to be reported the more severe it is, fatalities should be reported.

A problem in comparing against BARD is they purposefully exclude several accidents (commercial boats, on private lands, boat involved in a crime, etc.). One would need to be careful you were not finding accidents in an outside database that had been reported to BARD, but excluded from Public BARD. Student researchers might need to work directly with USGC on those issues. We supply some details later on this post on the boat propeller accidents that are not listed as such in BARD.

With the databases supplying annual data, it would be easy to run multiple studies, one year at a time to gain an understanding of how underreporting has changed over time.

Project 2. Compare the ratios/percentages of propeller accidents, propeller injury frequencies, and propeller fatality frequencies across time or across regions. For example, if two states with relatively similar geography, populations, waters, etc have startling differences in the ratio of injured people to total reported accidents or injuries to fatalities, or if those ratios change over time, some estimates of under reporting can be made. Ratios for the same region can also be compared over time. These studies could be performed on BARD data or by analyzing some of the many existing studies.

If anybody is interested in making a Senior Design Project, Senior Thesis, Masters Thesis, Capstone of similar project from one of these two opportunities, please contact us using the contact tab in the top menu.

If neither of these “floats your boat”, but you are interesting in a boating safety project, please see several other similar projects listed in our Research Projects category.

This post focuses on the accidents never reported to BARD, however, an understanding of those purposefully or accidentally excluded from BARD will be necessary to calculate some of the estimates.

A boating accident report (BAR) is supposed to be filed for boating accidents that meet any of these criteria:
1. A person dies; or
2. A person disappears from the vessel under circumstances that indicate death or injury; or
3. A person is injured and requires medical treatment beyond first aid; or
4. Damage to vessels and other property totals $2,000 or more; or
5. There is a complete loss of any vessel.

As mentioned earlier there is broad disagreement about the percentage of recreational boat propeller accidents that are actually reported to BARD. The industry says near 100 percent, some propeller safety activists say “only a small percentage”.

Per USCG Recreational Boating Statistics 2010, if an accident is reported, it will be excluded from BARD if it meets any of the “Non-Reportable” criteria below: 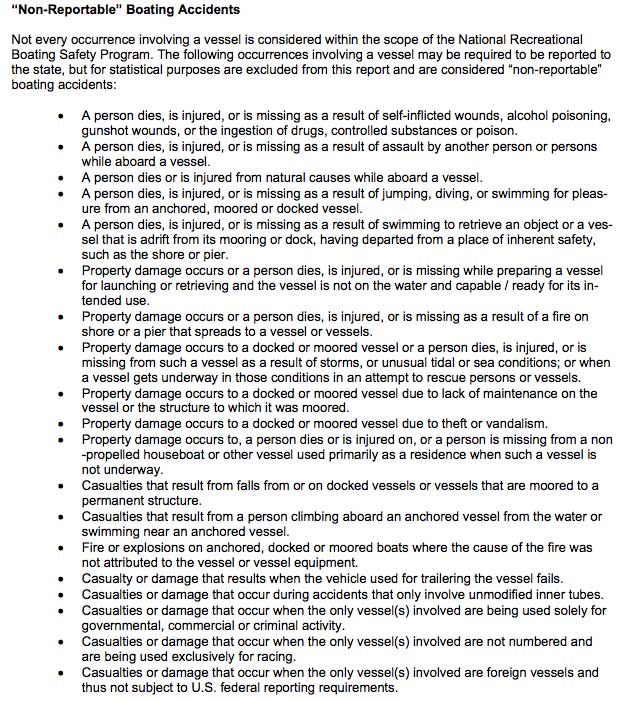