An NSW Transport Roads and Maritime accident investigation report dated February 2, 2012, “Report of a Special Purpose Investigation: Into a Propeller Strike Injury Involving an Australian Defence Force Academy Vessel on Lake Burrinjuck NSW on 14 February 2010”, found a group of Cadets and Midshipmen were undertaking training for water insertions (leave the RIB while underway) on Lake Burrinjuck NSW. After the training, the Cadets took the 6.3 meter RIB powered by a 115 HP Yamaha outboard for a joyride including high speed turns during which several people were ejected. In one of those incidents, a Cadet fell from the boat and sustained life threatening injuries from the propeller. 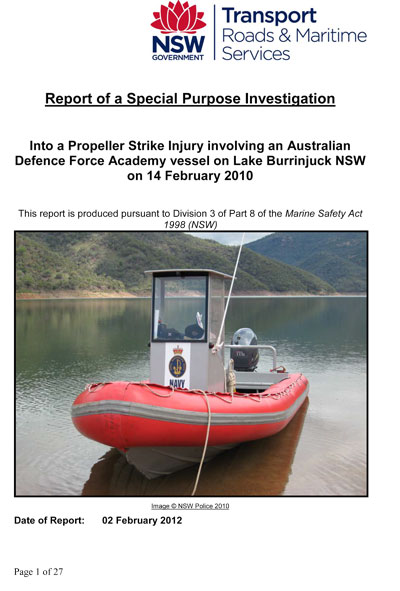 While the report does not identify the injured Cadet, it is obviously Oliver Minchin. This was a very high profile accident in Australia. Senate Leader Nick Minchin is Oliver Minchin’s father. The accident and Oliver’s recovery were prominently covered in the news.