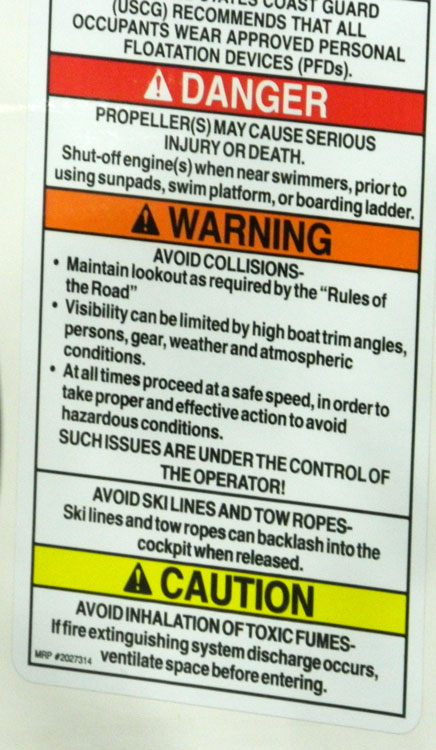 This invention has to do with displaying warnings based on the actual situations and conditions the boat is encountering or anticipated to encounter soon.

The effectiveness of conventional warning decals and placards on boats is reduced by: (1) The shear number of warnings displayed on the boat, (2) repetitive exposure to the same warnings, (3) some warnings fail to draw attention to themselves and thus are not read, (4) warnings are often not up front and prominent just before an action needs to be taken.

One method to minimize these difficulties is to display only those warnings relevant to the current situation. A reduction in the total number of warnings being repetitively constantly displayed at the same time reduces “warning noise” and results in more attention being focused on the most relevant warning(s) at that time.

The invention consists of four components or subsystems:

The Display – the invention uses one or more LED, OLED, LCD, Plasma, or other electronic displays capable of intelligently displaying zero, one or more warning selected from a group of warnings at a time, then switching to display other warnings as directed by the warning control system. The specific warning(s) to be displayed are based upon the:

BIWS selects the warnings to be displayed based on past, current, and anticipated conditions and the specifications of the boat:

Past, Current, and Anticipated Conditions – possible variables detected by Sensors or Gauges:

Individual sensors could be used to provide the condition of the variables designers elect to include in the BIWS, but many of these variables are already available in the CANbus system used on some boats, like in Mercury Marine’s SmartCraft system.

CANbus, ZigBee and/or other similar networking methods can be used to connect existing sensors and gauges on the vessel with the BIWS.

A series of rules would be written to determine which warning(s) to display in which situations. Some possible sample BIWS rules are shown below:

Or an existing computer system on the boat could be used or the same purposes.

The system could be updated (new warnings or other features added) by updating the software via a USB port or some other method.

The BIWS could be used as a supplement to existing warnings (leave some conventional warning decals/placards on the boat) display some others and maybe some left on the boat via the BIWS.

1. A system for displaying warnings on boats based on the current situation and conditions or those anticipated to be encountered soon.

3. The use of existing sensors on the boat (with the possible addition of more sensors) as inputs to the BIWS.

5. Detecting variables such as these: engine RPM, Gear (forward, neutral, reverse), boat speed, trim angle, if the boat is currently towing someone, if the tow load just dropped due to someone falling, swim ladder position (up or down), boat operator presence at the helm, the presence of alcohol or the actions of a boat operator under the influence, the locations of people in the boat, g loads (vertical from water impacts and laterally from turns), proximity to other boats, steering wheel position, and the presence of swimmers near the stern to improve BIWS decision making.

7. The use of a CANbus, Zigbee, or similar network to route the BIWS inputs and/or outputs.

8. The use of an existing network on the boat such as a SmartCraft network to route the BIWS inputs and outputs.

9. The use of outputs from an Engine Control Module (ECM), such as a Motorola MotoTron ECM 555, in a BIWS.

10. A BIWS display in which the brightness and other variables (such as black on white vs. white on black) are changed according to the lighting and glare conditions to optimize visibility of the display.

11. A BIWS display with an extension around the display to reduce glare (like a camera rubber lens hood).

12. The use of a flat black card below the display screen and tilted up to reduce BIWS display problems in strong sunlight. (similar to Hoodman’s efforts and those described on Cruisers Forum – search for computer screen glare).

13. A BIWS that can be updated in the field with new warnings, rules, and features as needed.

14. A BIWS that relies on a set of rules to select which warnings to display based upon current and anticipated conditions.

15. A BIWS that learns from past activities (it learns your normal uses, patterns of operation, locations, situations, etc) so it can better anticipate which warnings to display.

16. A BIWS that can automatically detect when a new operator is at the helm and begins to create new history files for the new operator, while continuing to retain the old files for a period of time.

17. A BIWS that can automatically detect when the boat has been moved to a new location (to a new lake, to a new state, to a new owner somewhere else, etc.). The BIWS begins to create new history files for its new location while continuing to save retain the old files for a period of time.

18. A BIWS that can display one of several different warnings for the same hazard. By storing and displaying multiple versions (different graphics and/or text) of the same warning each version of that warning will be fresher and command more attention.

19. A BIWS that can display warnings in one of more language. Specific languages can be selected by a switch or from a menu.

20. A BIWS incorporating Neural Networks for learning which warning(s) to display and when to display them.

21. A BIWS incorporating Fuzzy Logic for use in deciding which warning(s) to display.

22. A BIWS running on a SmartCraft network.

23. A BIWS that can operate based on a wide range of inputs being present or absent. Meaning, it can operate with just a few sensors, or additional sensors can be added now or at a future time. BIWS makes decisions based on the data available. More sensors may allow making more accurate decisions, but the system can operate all the way down to no sensors (running based only on its knowledge of the boat on which the system is installed).

24. A BIWS that can issue audio (such as a horn, beep or buzzer) and/or verbal warnings.

26. A BIWS than utilizes input from a GPS or an internal GPS system to improve its decision process of which warning(s) to display.

28. A BIWS utilizing one or more electronic displays such as an LED, OLED, LCD, or Plasma display to display warnings.

29. A BIWS utilizing weather reports (current and future conditions) to make decisions on which warning(s) to display.