This is a continuation of our list of boat builders that have offered propeller guards as an option or sold propeller guards, or provided their boats for use at a major event at which they knew guards would be required (such as the Olympics).

Narwhal builds outboard powered RIBS and sells them with propeller guards as show in the Narwhal SV 420 rescue boat shown below. This image comes from Narwhal’s listing on RescueBoats.nl. 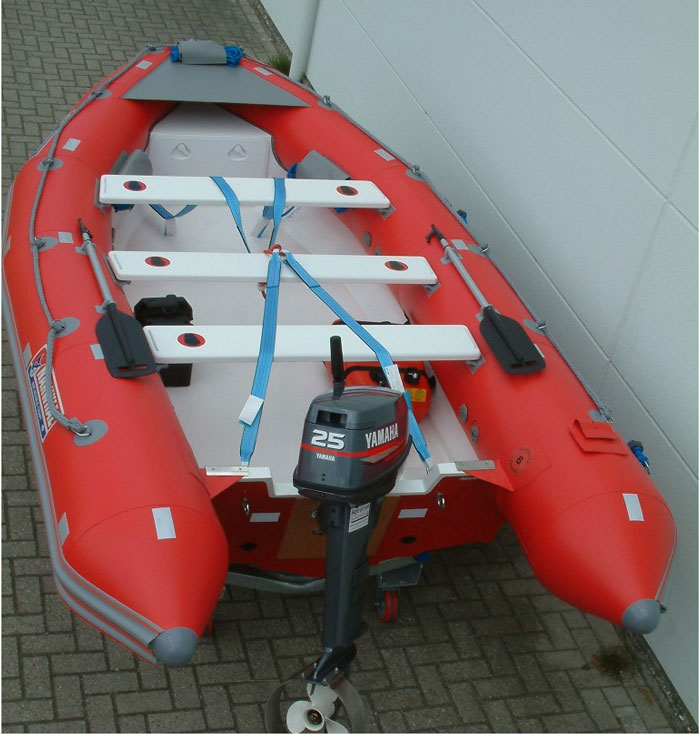 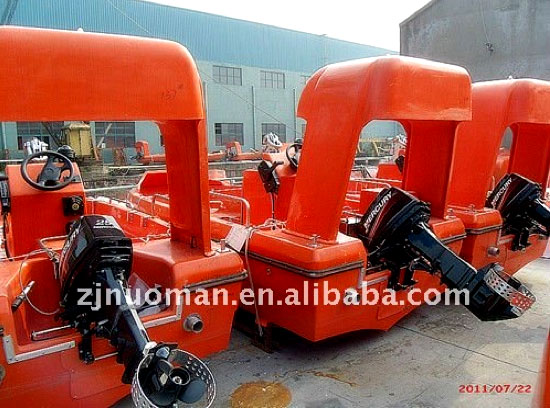 Outboard Marine Corporation was a major producer of boats prior to going out of business in early 2001. See our Bombardier Recreational Products & OMC listing in Part 1 (A-M). Also see the OMC Australia listing below.

While Outboard Marine Corporation (OMC) claimed the Gale ring guard was never for protecting people (see our listing for Bombardier Recreational Products & OMC in Part 1), they forgot to tell OMC Australia. Down under, OMC Australia paired the Gale Guard with a catchers mask style end cap and sold it to the Surf Life Saver market. Not only did they sell it, they got it on the Surf Life Saving Association of Australia (SLSAA) approved list of propeller guards and did very well in the market. The guard, and their accompanying outboard motor, sold well for many years. OMC Australia even bragged about how well the guard protected swimmers and people in the water in the Winter 1996 edition of POWER, an OMC corporate publication.

A partial copy of the list of SLSAA approved guards is shown below. It comes from SLSSA Specification Update Bulletin No. 504/88. 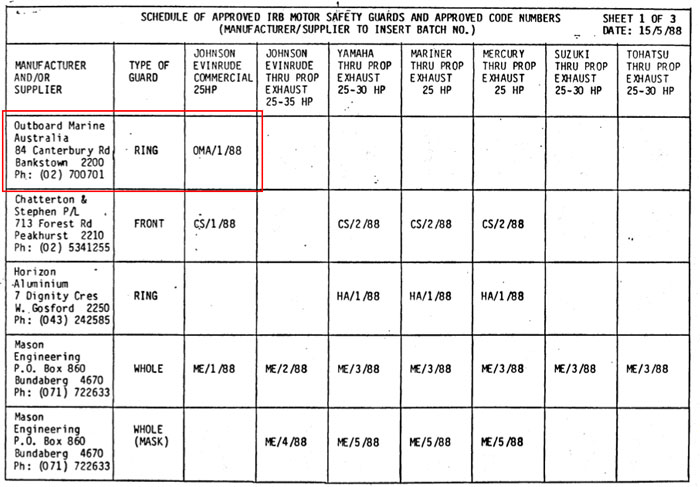 Supreme Aluminum Boat (of Singapore) offers some workboats, including this 18 footer with an optional propeller guard. 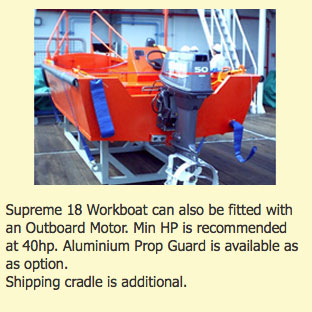 A January 23, 2012 Willard Marine press release states they were awarded a U.S. Navy contract for six 7meter RIBS to support Anti Mine Counter Measures (AMCM) activity. The outdrives will be equipped with a propeller guard. 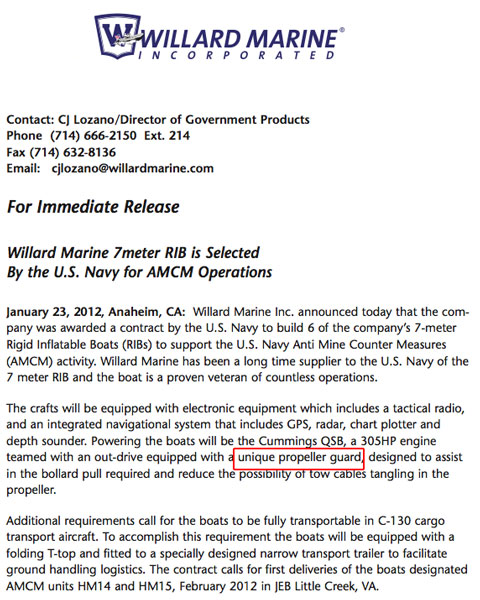 Yamaha Motor UK now (2012) sells propeller guards for all outboard models. Their announcement is in their professional (commercial, government, military use) side. They claim their plastic prop guard or their stainless steel propel guard will “assist in limiting the chance of foreign objects fouling the propeller.” Yamaha also notes the guards will assist in controlling flow from the propeller and can increase thrust at low RPM. 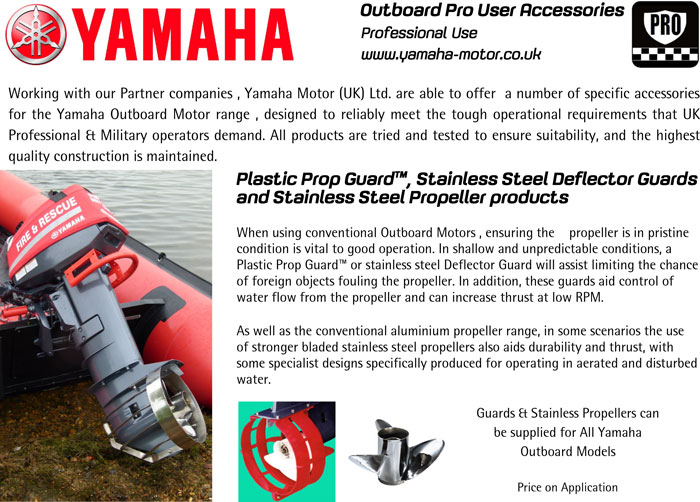 “This model has several bespoke accessories tailored to special needs – optional lightweight carry handles, for speedy deployment as well as a new design of propeller guard, shaped to give greatest strength, with minimum water-flow disturbance to the propeller giving maximum performance when required.

Zapcat (4 meter two man racing catamarans from the U.K.) offers propeller guards as an option as of July 18, 2012. 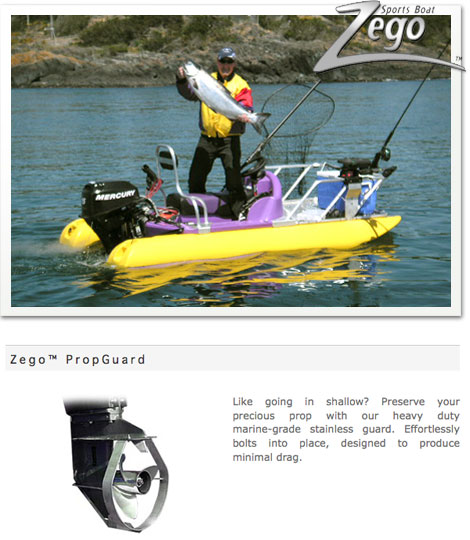 Several boat manufacturers offer propeller guards through their government, military , or professional sales division to meet requirements like SOLAS or other needs of these special customers. For example, ZODIAC offers several SOLAS approved rescue boats. Among them is the P561 SOLAS Rescue Boat shown below. 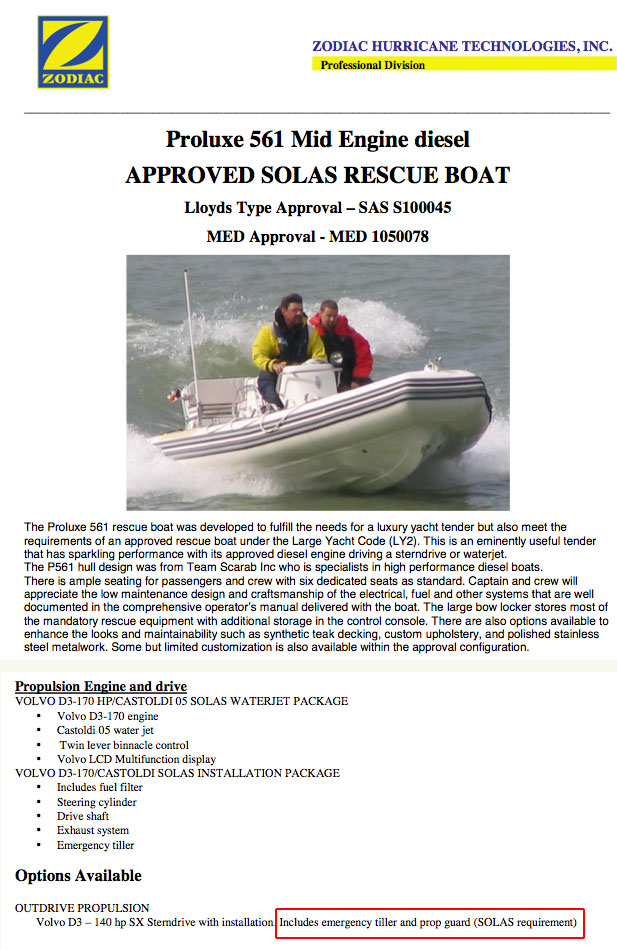 Zodiac’s Military and Professional Division also sells outboard boats with propeller guards as seen in the pre-rigging table below for their 2002 model year 472S boats. Please note they were putting guards on both Mercury and Bombardier outboards. 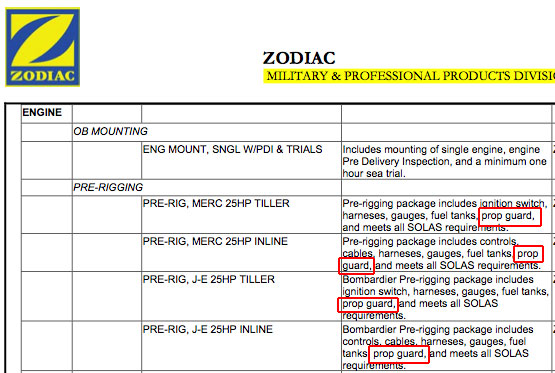 If anyone is aware of other boat builders offering boats with propeller guards, please drop us a note using the Contact Us in the top menu and we will list them (except for the SOLAS rescue boats and life boats because there are far to many of them to list).