The original efforts were by a firm called ContraJet Ltd. After that effort stalled, it became PropellerJet Ltd. The water jet research and development operation is now called Contrapel Ltd.

The technology is now running in a 10 meter rescue boat built by Stabicraft Marine. 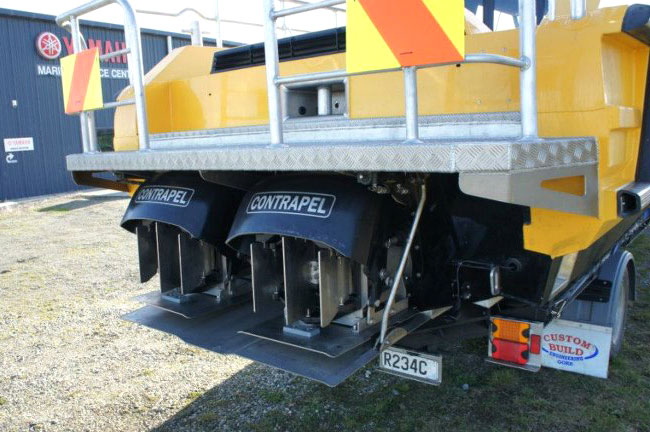 The inventors claim the technology is more efficient, safer, and better for the environment. Now that they have secured the patent, the inventors are showing Contrapel technology to the world. The U.S. Military is said to be looking at Contrapel. The inventors note they are also working with Volvo engine technologies to optimize their design.

In addition to recreational boats, Davies and Paterson hope to apply Contrapel to large ships and submarines.

Contrapel has also been used to generate electricity and has obvious application to pumps.

The inventors claim it can operate as either a surface or a subsurface drive.

Contrapel works by accelerating the water shortly after the intake instead of trying to squirt it out a nozzle at high velocity. Contrapel just dumps the water out an outlet with minimal back pressure.

A Contrapel Oscillator allows the twin counter-rotating impellers to oscillate out of alignment as they rotate. While the oscillation does not noticeably increase vibration, it does significantly reduce the power requirements to spin the impellers.

They claim Contrapel Hybrid (the non oscillating version) works in all sea states and produces a high propulsive thrust at all speeds.

Contrapel notes their unpressurized plume behind the boat does not create the same hazards as traditional water jets (water entering the rectum or vagina when someone is too close the water jet. These injuries are sometimes called water skiing douche or water skiing enema when the injury results from a fall while water skiing.

Plus the plume comes out straight and makes a nice surface on which to water ski.

We are always thrilled to see new marine drive technologies, especially those that have been field tested in boats enter the arena.

We were able to identify a two relevant U.S. patents:

No one said anything about estimated cost. Oscillating a twin contrarotating impeller water jet sounds a lot more expensive than a traditional propeller. Plus there was no mention of longevity.

While we wish Contrapel the best and hope all their statements are honest, factual, and made with the best intent, we would not be doing a service to our readers if we did not once again refer back to Marcello Truzzi’s statement later publicized by Carl Sagan, “Extraordinary claims require extraordinary evidence.”

Contrapel’s web site has several sentences and phrases that have been used in the past to raise funds for new technologies (or sell snake oil). Phrases inventors have use in the past include telling us things are so complex we really can’t understand them, how they have identified new scientific principles, and how the invention is going to revolutionize an industry. A few sentences from the Contrapel web site on 10 September 2012 are quoted below.

“Examination of the Contrapel hydrodynamics reveals a new understanding of an incredibly complex and difficult area of science.”

“This is not in anyway speculative or purely theoretical.”

“… a series of amazing discoveries were made, which led to a completely novel understanding of the hydrodynamics and drafting of new patents.”

“Furthermore Paterson and Davies discovered a radical new field of hydrodynamics and named it “Super Oscillation”.”

a photo of a “Secret test of a new propulsion system …” is provided.

“A propulsion technology which resets the benchmark for energy and performance at all speeds.”

“Such a technology would be the “holy grail” of high-speed propulsion.”

“This is an astonishing discovery and it’s not overstating the case to say that its the greatest breakthrough in propulsion since the propeller itself.”

“…. the development of the world’s first super efficient propulsor”

“The Contrapel Hybrid system will dominate the field of water propulsion in the future.”

Those who have been around a while may remember another propulsive technology that made some similar claims and statements, the Pursuit Drive from Pursuit Dynamics, that has since faded from view. It came out of Australia, as did the RingProp whose intellectual property is currently being sold in bankruptcy. A remnant of Pursuit Dynamics appears active in developing food processing technologies.

“A great idea is a great first step, but having a product that meets high standards of reliability and safety is the real test.”

We are absolutely not saying that Contrapel is hocus pocus. Stabicraft Marine is a first class, well known, builder of high quality, very durable boats. Stabicraft’s involvement significantly increases the “stature” of the technology.

We have seen videos of small Contrapel powered boats running fast in shallow water, maneuvering very well at low speeds (which is not usually possible with conventional water jets), running hard in very rough / white water, and performing other challenging tasks. Contrapel has certainly progressed a long ways from theoretical sketches. The certainly have something. Exactly what they have remains to be seen.

We are waiting a while for additional information to substantiate some of Contrapel’s more zealous claims. We are especially waiting for side by side comparison performance test data for propellers, water jets, and Contrapel in similar boats in similar situations. Contrapel chose to make numerous extraordinary claims, and just like Carl Sagan, we would like to see some extraordinary proof before we jump on the bandwagon. But we do hope the Contrapel bandwagon is real, and we especially hope they are able to bring safer propulsion to recreational boating while avoiding the known safety issues with propellers and water jets.