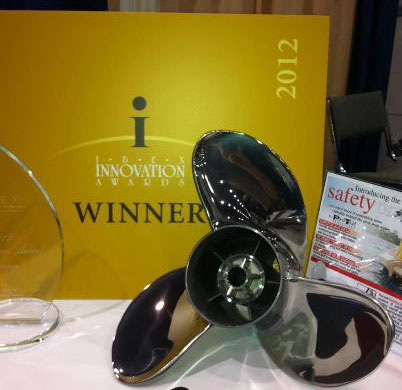 In an October 4, 2012 International Boating Industry piece covering the innovation awards, Steve Powers of PowerTech Propellers said the Safety Prop propeller has round-bladed edges that “tend to minimize the possibility of being cut during a slow-speed impact.” He also notes its unique blade shape improves stopping and reverse power.

Steve Powers says his IBEX 2012 booth traffic picked up after the announcement of the PowerTech! Safety Prop winning the Innovation Award. He reports members of the U.S. Coast Guard, members of the National Safe Boating Council, and OEMs (Original Equipment Manufacturers) came by wanting to learn more about the propeller.

He reiterated, “This is the type of product that could make a big difference in slow-speed impacts…. For Example, under the right conditions, when someone is swimming around a swim platform and the driver puts it into reverse, the propeller might not cut the swimmer.”

In closing, Steve Powers of PowerTech said, the path to innovation tends to be a revolutionary process. Last year PowerTech won the innovation award with a sharp edged prop with cupping on the back side of the blade. This year, they looked for ways to blunt the edge of the blade that resulted in this year’s rounded edges. Then he said, “It is true that innovation in and of itself breeds more innovation. One idea leads to other ideas.”

Boating Industry magazine said PowerTech! even had a rather convincing demonstration “that the word safer blade edge design and props can be mentioned in the same sentence.”

We are always thrilled to see firms working on new propeller safety devices. Plus its nice to see them receive awards.

Plus we wonder if the demonstration mentioned by Boating Industry was the same one used by the Australian Safety Propeller (put their bare arm into the rotating propeller)?

Now, four years after the Australian Environmental Safety Propeller came on the scene, what looks like the same propeller, but from a U.S. propeller manufacturer, wins the IBEX 2012 innovation award?

Its now ten days after the awards and we see no mention of the award on PowerTech!’s web site (Update – now its over a year later and its still not mentioned either), while other winners were screaming they won from their websites soon after the awards. Plus there is also no mention of PowerTech! receiving the award on their Facebook page. Plus the Safety Prop is not even mentioned on PowerTech!’s company page on the IBEX site. Sort of looks like when Pharaoh removed Moses’ name from everything.

The only image of the Safety Prop we were able to find was on Propeller Solutions Facebook site (a PowerTech! distributor).

We are NOT accusing PowerTech of stealing ideas. It just all just looks pretty weird to us. We would appreciate any information anybody (IBEX, BWI, PowerTech, USCG, ASP, others) has that could help clarify the situation. Please use the comment box below for public comments or email us using the “Contact US” tab in the top menu for private comments.