They want to test your guards trimmed full under at speed with the same propeller used on the boat in the unguarded condition, but they want to test their guards at optimal trim with a reduced pitch propeller.

Test Your Guards Trimmed Full Under

In a typical propeller guard court case, the prosecution presents an exemplar propeller guard, a propeller guard they say would have prevented the accident or lessened/mitigated the victim’s injuries. The industry then tests that guard, sometimes called litigation testing. During those tests, the industry typically tests the performance of the boat with and without guard (acceleration, top speed and handling issues) with the drive trimmed all the way down. Even without a guard, several boats have handling issues with the drive trimmed full under at speed, plus they use a lot more fuel as they plow through the water. The prop tries to push the bow of the boat down, resulting in bow steering issues (harder to steer, may dart to one side or the other on its own, high steering torques, etc.). Ring type and cylindrical ring type propeller guards create loads on the drive/boat as they try to orient themselves to be parallel to the oncoming water. As a result, some ring and concentric ring propeller guards may create bow steering issues when trimmed full under at higher speeds.

Even boat operators without propeller guards are normally instructed to trim the drive under to takeoff from a stop, then trim it back out as the boat picks ups speed. Once up and going, trim can be adjusted for best performance.

The current U.S. Coast Guard Propeller Guard Test Protocol still under development says to test the guard trimmed under 6 degrees at top speed. (It also tests them at neutral trim, and trimmed out 6 degrees). Testing ring type and concentric ring propeller guards at top speed with the drive trimmed 6 degrees under, will probably create bow steering issues with some guards.

Here are two examples of the industry testing guards trimmed under:

It has long been known that many propeller guards create additional drag. That drag may reduce the top engine RPM the boat can obtain far enough that another propeller with a lower pitch is required to get the boat back up into the optimum RPM range for best performance (see Reed’s July 1987 Report pgs. 13-14). However, the industry still wants to test your guard with same propeller used on the boat without a guard and directly compare the results.

Propeller guards that create drag are able to recover at least part of the non-guarded performance of the same boat, by changing the propeller to a lower pitch that allows the engine to rev back up.

Both the industry and the USCG Coast Guard test protocol prohibit this (changing propeller pitch). Many guards tested in this manner will record poorer performance than they are capable of with the proper propeller pitch.

When Their Own Guard Was Tested, They Promoted a Different Set of Rules

Back in early 1989, Mercury Marine and Outboard Marine Corporation (OMC) were working on a potentially lucrative contract with the U.S. Marine Corps for outboards and propeller guards for their Rigid Raiding Craft (RRC). These RIBS often had Marines in the water loading and unloading with all their gear when the boat was at or nearly at rest. USMC wanted to prevent them from being injured by the propeller (Mercury says the guard was only to provide protection when the boats were at or nearly at rest, while others suggest the USMC wanted protection in all conditions). An open competition was announced. Bryan Chadwell’s ring guard and Mercury’s Snyder Guard competed for the contract. In the early performance test results, Chadwell’s guard was running much faster than Mercury Marine’s wire cage guard, but Chadwell’s ring guard was having at least minor boat handling / steering torque issues (USMC testing the guards trimmed all the way down).

When Dick Snyder at Mercury Marine saw the preliminary test results, he fired back a letter to the Marine Corps (a copy is below) calling for the guards to be tested at optimal trim AND for his guard to be tested with a lower pitch propeller. 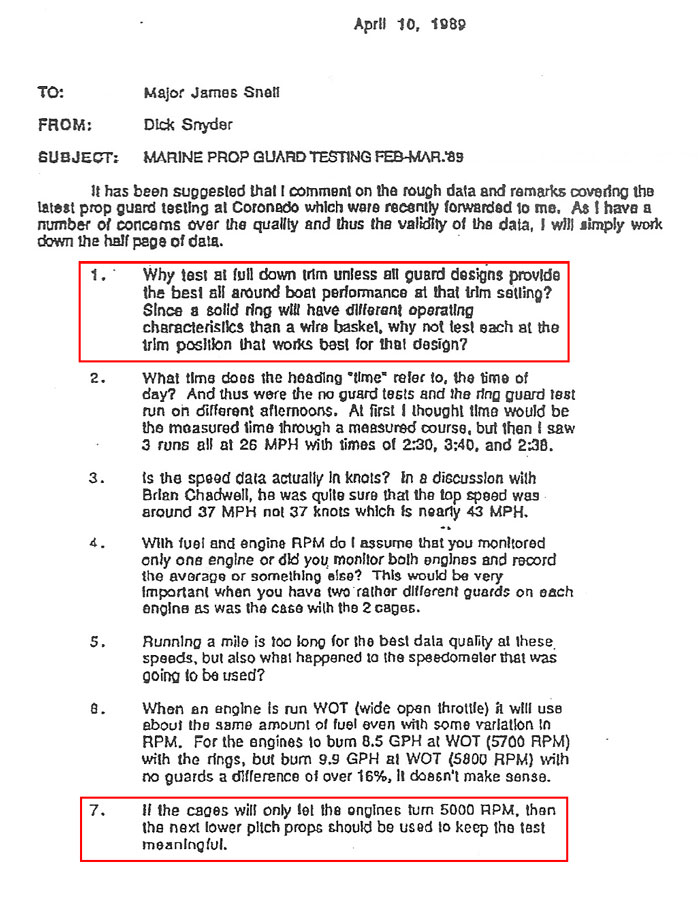 As shown in the Snyder-Snell letter above, litigation testing, and the upcoming U.S. Coast Guard Propeller Guard Test Protocol, if you build propeller guards, the industry wants to test your guard trimmed all the way down at full speed using the same propeller that was used on the boat in a non-guarded condition. But when their own propeller guards were being tested, they want the guard trimmed to optimum position and the propeller changed to a lower pitch. That certainly sounds like a double standard to us, what do you think?