Since the mid 1990’s the United States Coast Guard has published several notices concerning proposed regulations involving propeller guards & other propeller safety devices, and requested public input on those proposals. While much of the focus has been on propeller guards, other propeller safety devices have also been discussed. Among them are swim ladder interlock switches, backup alarms, mirrors, swim gate switches, kill switches, virtual kill switches, starter delays (beeps for a few seconds before starts), and rear view cameras.

The announcements have been published in the Federal Register.

The process appears to have been less defined prior to 1998. The Coast Guard was using its own set of docket numbers and reused one of them several times as a rental boat propeller safety project continued to evolve. USCG opened and closed public comment periods numerous times, renamed the proposal a few times, then finally renumbered the proposal under the new docket system in order to archive the records.

Dates of Notices in the timeline below refer to Federal Register published notice dates.

We took the four major regulatory proposals above, along with the currently ongoing Propeller Guard Test Protocol, and plotted them as a timeline. If you click on the resulting chart below, you will be presented with a larger pdf version of the USCG Propeller Safety Proposal Timeline. 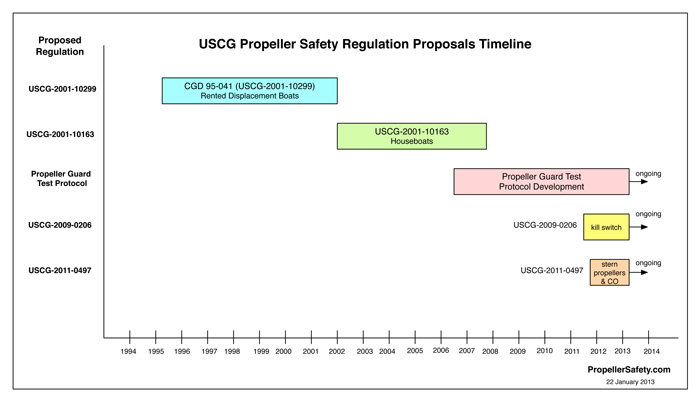