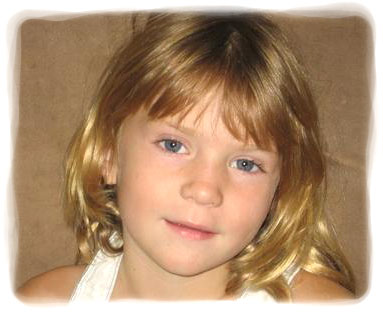 Sarah Marie Roderick, age 8 of Cottonwood Arizona, was on Lake Havasu in a rented pontoon boat on Monday afternoon April 21, 2013. About 3:40pm her father was driving the 24 foot 2000 Premier pontoon boat with his wife and their four children aboard. They were at the Salt Basin area in Mohave County and proceeding north slowly. The child, Sarah, was wearing a life jacket and riding at the bow. She fell overboard, the boat passed over her, and she was struck by the propeller.

Lake Havasu firefighters and a life flight helicopter arrived to assist, but Sarah Marie Roderick was pronounced dead at the beach.

Officials noted alcohol died not appear to be a factor in the accident. They also said the lifeflight helicopter arrived about 15 minutes before the vessel made it to shore. That leads us to suspect her injuries were very severe.

Sarah loved animals and volunteered to spend time with the elderly.

Her parents, Scott and Noreen Roderick, family, and friends will celebrate her life at a 10:30 am memorial service at Verde Baptist Church on Monday 29 April.

Contributions in her name can be made at any Bank of America.

We extend our condolences to Sarah’s family.

About the Boat, Boat Builder, & Outboard

The boat is described as a 24 foot Premier pontoon boat built in 2000. We started to post a representative photo, but Premier produces numerous pontoon models and its hard to tell which one this one might be without a photo or additional information.

Premier is a family owned, independent boat company. They focus on quality vs. price. In 2013 Premier is celebrating 20 years of being in business. Premier prides themselves as a leader in innovation and design.

As an independent, they use outboards from several manufacturers making it hard to determine whose outboard was involved in the accident.

If anyone out there can identify the outboard manufacturer or model of Premier pontoon, please let us know and we will post the information.

Premier’s catalogs and web site (pontoons.com) have a much warmer, family feel to them than the big boys “buy me” literature and websites. We hope this accident encourages Premier to focus some of those innovation and design skills on preventing similar accidents in the future. Hopefully, they will become a leader and others will follow.

People, and especially children, have been falling off the bow of pontoon boats and being struck by propellers about as long as pontoon boats have been around. On 11 May 1995 the U.S. Coast Guard posted a request for comments on propeller accidents involving houseboats and other displacement type recreational vessels (CGD 95-041). After several comment periods and public hearings, a proposal (now known as USCG-2001-10299) focusing on rental displacement boats was withdrawn in December 2001. That proposal primarily focused on rental houseboats and rental pontoon boats. Public comments made in that era referred to numerous specific pontoon boat bow overboard propeller accidents. A related proposal addressing houseboats was launched on the same date the rental displacement boat proposal was killed, but pontoon boats were mysteriously absent from the new proposal.

Since then we have seen many pontoon boat bow overboard propeller strikes in the media and reported in he U.S. Coast Guard Boating Accident Report Database (BARD), most of them involving children.

In response to this accident we finally started to compile a list of similar accidents to encourage the industry to adopt the existing solutions or work on their own. We posted our list at Pontoon Boat Bow Rider & Over the Bow Propeller Accidents.