Samantha Maywell, 24, known as Mermaid Samantha of Brookswell, Florida was boating with two other Weeki Wachee Springs Mermaids on the Gulf of Mexico about 15 minutes off Hernando Beach on Thursday August 22.

Details are still sketchy, but Samantha (Mermaid Samantha)’s left leg was struck by a boat propeller about 4:30 pm.

All three mermaids were on a pontoon boat. Samantha Maywell fell overboard and her left leg was almost severed by the propeller. The other two mermaids were not injured. Samantha was taken to the shore, then on to Regional Medical Center Bayonet Point in Hudson, Florida where she was in critical condition.

More recent reports indicate they were out after dark on a pontoon boat, the wind and waves came up, and they started to shore. The winds kept them in the channel, another boat drifted toward them, and Samantha went to the stern to push away the drifting boat. A large wave stuck the pontoon, she fell over the stern, and into the propeller.

Samantha has a five year old daughter and also worked at Hooters in Hudson Florida.

A Facebook page, Help Mermaid Samantha was setup by her older sister encouraging donations and following her recovery. The link was no longer functioning in late May 2015.

26 September 2013 Update – fundraising efforts continue. About a thousand dollars was raised at the Texas Roadhouse event, about a thousand from a state park fund, about $1,500 from the Facebook page, plus the Chick-fil-A and Monster Transmission event raised still more funds per the 26 September Hernando Today. Samantha is to have her leg staples removed today. She is supposed to keep pressure off her leg for three months. While fundraisers are a great showing of community support, those of us who have seen this before recognize those funds will barely be a drop in the bucket toward her medical expenses. However, sometimes these funds are able to significantly contribute toward more immediate expenses such as rent and food.

6 September 2013 Update – Samantha is scheduled for another surgery on Tuesday (Sept 10). They plan to take some stuff out (the external fixator) and put a plate in her knee. Doctors hope that she will recover enough from that surgery to be able to go home about 5 days later. The Texas Roadhouse fundraiser last night was a big success. Samantha is hoping to create a “thank you” video soon as she was unable to attend. Other reports say she was actually able to come home September 4 for a few days before the upcoming surgery.

6 September continued – The next fundraiser will be held at Chick-fil-A on Cortez Blvd in Brooksville FL on Saturday September 14 from 4 to 7 pm. They will have raffles, a donation bucket, and a portion of sales will be donated to Samantha.

4 September 2013 Update – A fundraiser will be held at Texas Roadhouse Grill on State Road 50 by the Beacon Theatre tomorrow (Sept 5) from 3 to 10 pm. The restaurant will donate 10 percent of your bill to Samantha’s medical expenses if you mention, Mermaid Samantha. Four mermaids will be there from 6 to 7 pm to interact with the crowd.

27 August 2013 Update – Today’s Hernando Today reports doctors have been able to save her leg. Samantha is scheduled for surgery to repair her leg today. She is doing better. They are trying to flush out and clean out her leg, and hope to be able to reattach some tendons. A fundraiser will be held for Samantha at Texas Roadhouse in Brooksville Florida on September 5th from 3 to 10 pm. Tell them you are there supporting Samantha and 10 percent of your bill will be donated to the cause. Some of the other mermaids, and Samantha Maywell’s family will be in attendance from 6-7pm. Some other restaurants have pledged their support as well.

27 August 2013 Facebook update – Samantha is out of surgery, no signs of infection, and doctors were able to reattach the tendon.

Weeki Wachee Springs State Park welcomed Samantha to the mermaid roster on March 4, 2012. She had just completed her SCUBA training and would now begin training as a mermaid.

A video of her first mermaid show was published June 27, 2012. In the video she says she had been training four months before the first show.

We notice the Mermaid Show reads letters from children in a segment called Tail Mail. They try to encourage child literacy by interacting with the children and reading their letters. A recent feature of Mermaid Samantha doing “Tail Mail” is below.

Some great photos of her greeting children at the park are below. 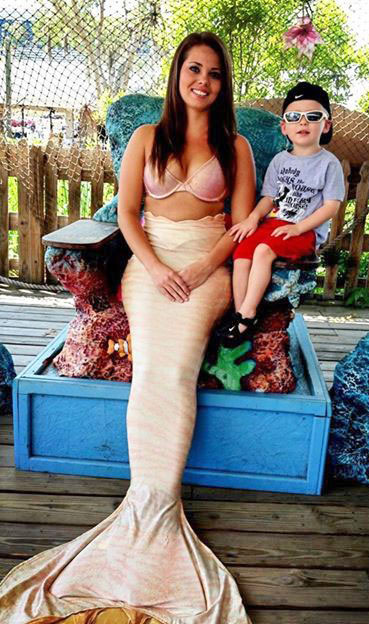 Its very apparent this beautiful young woman was loved by children at the park. We want to wish her a speedy recovery, but we recognize that is not possible with these accidents. We wish her the best recovery possible and will put her in our prayers. We encourage our readers to do the same.