The Media and Boat Propeller Safety

It is also important to recognize many different media segments impact boat propeller safety, including:

We have written several articles on these topics in the past. This post will try to bring our previous posts on this topic together, and outline some of our plans for the future.

Brief Discussion of our Previous Coverage 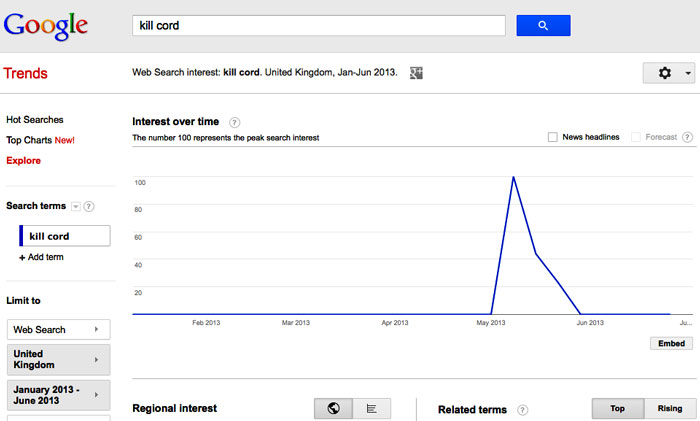 Relative Frequency of Google Searches for “kill cord” in the UK

Future Project – Comparing U.S. media coverage of boat propeller accidents, with the quantity of coverage in other countries

We have made some quick comparisons of the quantity and level of coverage of boat propeller accidents in the U.S. vs. the UK and plan to enlarge those efforts. One opportunity is to analyze new media coverage of the Hutton (UK) and Gorzell (US) accidents. These two promising teenagers were fatally struck by boat propellers on opposite sides of the Atlantic at almost the same moment.

We have completed a very quick comparison of Hutton vs. Gorzell media coverage. We captured Google news article counts for the phrases “Charlie Hutton” and “Kali Gorzell” four days after the July 20, 2012 accidents (captured at 9:35 am our time, July 24, 2012).

Kali Gorzell (US) had 32 news articles, almost all of which were local to her San Antonio area, or scrubbers just copying their text.

Charlie Hutton (UK) had 321 news articles, many of which were in the national media.

321/31 = approximately ten times as many news articles in the UK. The actual penetration would be even much greater with the UK national media carrying countless stories and updates, vs the few regional stories in the U.S.

In recent times, the UK immediately flashes to national media coverage of specific propeller accidents, while the U.S. tends to cover similar accidents locally, or not at all. We have even seen some recent instances of the UK nationally covering U.S. boat accidents that were only regionally covered here (Mansour, Feehan).

We plan on further developing this comparison in the future.

Future Project – Analyzing tone, gore level, and other differences in media coverage of propeller accidents around the world 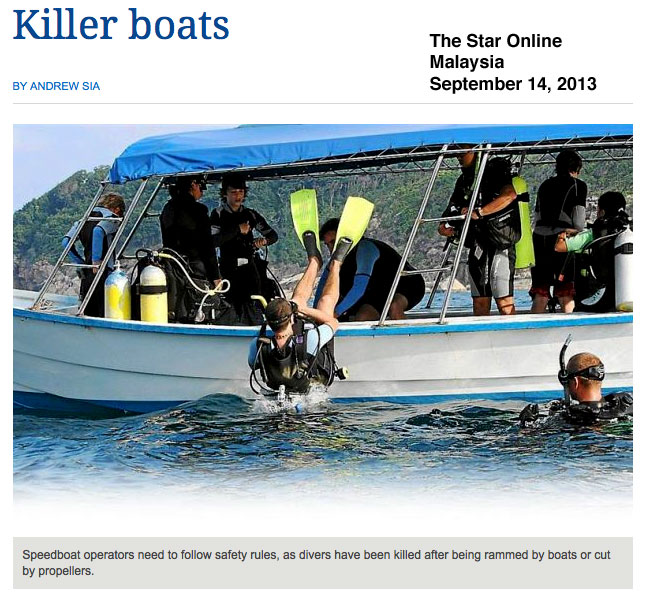 Different tones are quickly observable in the coverage in some countries. Some administrations seem to want to sweep them away and hide them, while their people want to complain about the risks of being in the water and no actions being taken. Others focus outside their country against those who may be insisting on changes to keep their tourists safer. Portions of Asia are known for particularly gory photos and headlines following propeller accidents. Charter businesses (dive, party, snorkel), especially those outside the U.S. tend to want to hide that an accident even took place.

We plan on developing some stories on the differences in media coverage by country in the future.

Our Message to the Media

We appreciate your coverage of boat propeller accidents, issues, events, and propeller safety devices. We ask that when you include boat propeller accident statistics from the U.S. Coast Guard that you make sure you report those statistics correctly. While we recognize that money talks, we encourage you to stand up to your advertisers and print the truth on issues important to public safety when appropriate.

Thanks again for all you efforts to make the public more aware of boat propeller accidents and the issues surrounding them.