The boating industry has a long history of misleading the public and authorities by providing recreational boat propeller accident counts much lower than the official accident statistics provided by the U.S. Coast Guard.

We highlighted a table from USCG’s 2010 Boating Statistics below as an example. 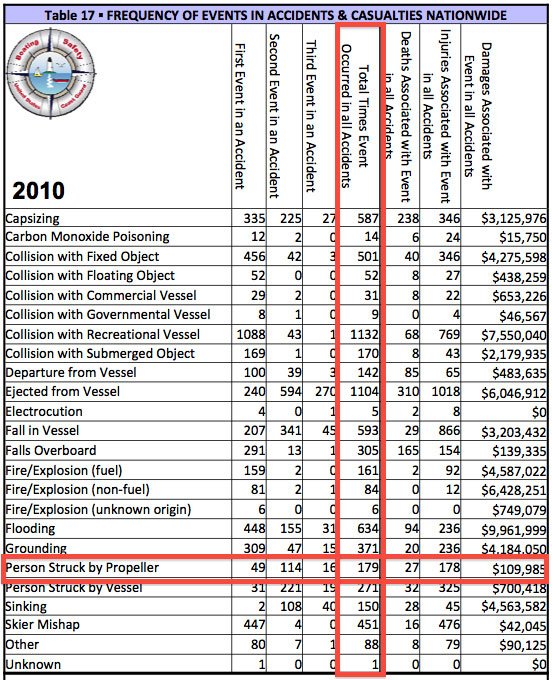 USCG’s 2010 Table 17 above shows 179 accidents, 27 deaths, and 178 injuries from Person Struck by Propeller. The industry keeps wanting to use the Event 1 data only to the left (49 people struck).

From 2003 through 2012, there have been about 49 to 107 Event 1 propeller accidents per year with about 1 to 8 fatalities per year resulting from those Event 1 accidents.

However, during the same years there have been a total of about 176 to 266 propeller accidents per year with about 19 to 47 fatalities per year resulting from those accidents per USCG.

When the industry only cites Event 1 accidents they are significantly misrepresenting the total number of reported propeller accidents.

We have covered some instances of the boating industry misrepresenting these statistics in the past. We recently encountered another one, and decided to pull some of them together into this post.

Dick Snyder, the industry’s leading expert, wrote Jim Getz on February 23, 1989 of his “discovery” that USCG reports accidents as a series of events. Snyder provided new fatality data (an average of 30.4 fatalities struck by boat or propeller per year) in this letter based on all three events. However, as seen in the timeline below, the Subcommittee had already met for three of its four working meetings, and some members were already gone from the roster. We see can find no record of Getz sharing this new found information (higher fatality counts) with the rest of the Subcommittee AND Snyder’s new found statistics are not in the final report. We reworked one of our earlier NBSAC 1989 timeline graphics to show when Dick Snyder presented, wrote the “Event 1” followup letter to Getz, and then later wrote the “All Events” letter to Getz. 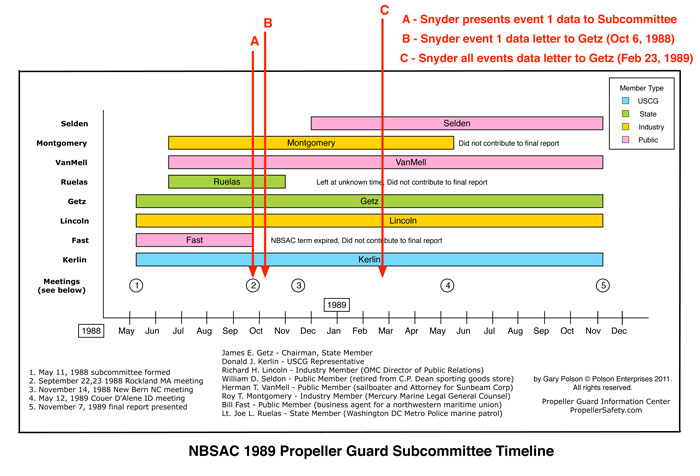 The timeline clearly shows how late the correct Coast Guard data was provided. The 1989 Subcommittee on Propeller Guards found no need for propeller guards which appears to be at least partially based upon Snyder’s earlier misleading statistics.

Ralph Lambrecht’s column in Boat and Motor Dealer Sep/Oct 2006 titled “Prop Guards Are a Subject That Seems to Live Forever” said there were about 7 fatalities and 100 injuries per year attributed to being struck by motor or propeller. 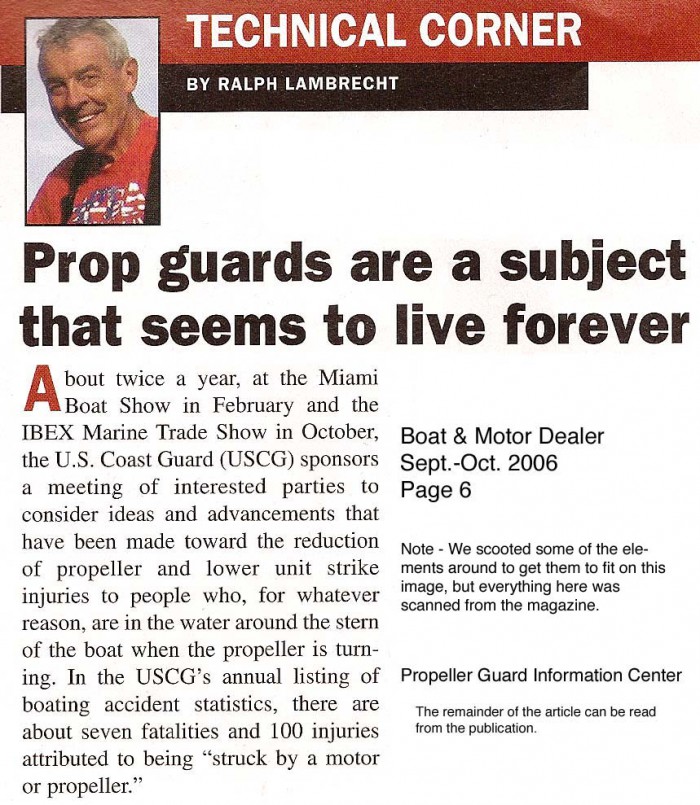 Lambrecht is incorrectly relying on Event 1 only data to represent the total number of propeller accidents, injuries, and fatalities. Its 2006 and Lambrecht still hasn’t “discovered” what Snyder discovered back in February 1989. He is still testifying in court for the industry.

USCG Boating Accident Report Database (BARD) data actually indicates about 30 to 45 people were killed annually and approximately 185 to 265 were injured per year from 2001 to 2004.

We confronted Lambrecht with the actual data and he refused to correct his article. Our lengthy exchange with him is online in How One Boating Trade Magazine Responded to the Truth. In April 2007 Lambrecht finally published this statement speaking of propeller accidents, “It seems clear that such things do occur more than half a dozen times a year …” but he provided no numbers.

Interestingly, Lambrecht’s publication (100 accidents, 7 fatalities) is probably the source used by Mikal Watts and Don Kueny in the next segment.

In the Decker trial (June 2009) Kueny said he was one of about twenty people at OMC that received the annual Coast Guard accident statistics from the mid 1970s forward. (transcript pgs. 658-659).

Mikal Watts, lead attorney for Decker, made the common mistake of interpreting Event 1 USCG accident statistical data as representing the total number of accidents. Watts asked Kueny, “the Coast Guard reported officially 100 propeller-strikes injuries in the United States per year?” (transcript pg 661). Kuney said he did not recall that data, but since Watts had it printed he could not argue with it. We suspect Watts may be showing Kueny the Lambrecht article discussed above.

Once again, Watts asked, “In terms of a working number, that is a number you’re familiar with, that in terms of the repetity of the hazard, at least the Coast Guard was saying a hundred prop strikes on average?” (transcript pg. 662). Kueny said, “If you say so, I don’t remember it being that high, but I can’t disagree. You’ve got the data. (transcript pg. 662).

Naples Daily News (NDN) did a great job of blogging the trial. Their June 6, 2009 coverage presented some of the specific data shown by Watts. NDN incorrectly used Event 1 statistics when they wrote Federal statistics showed more than 80 propeller accidents in 2007, the most recent statistics available. They went on to note that was down from 2006 when there were 107 accidents resulting in 98 injuries and 8 deaths.

On 9 June 2009 Naples Daily News more correctly reported there were 176 boat propeller accidents in 2007 with 24 deaths and 166 injuries.

You have all seen more recent statistics 236 (accidents) and 47 deaths. Those statistics are not unusual.”

In summary, when the attorney mistakenly confronted Kueny with Event 1 only data, Kueny did not even want to accept those low numbers. Kueny said he did not remembers the numbers being that high. After we called the attention of the press to the correct data, the attorneys learned how to properly interpret USCG annual accident statistics and used them later in the trial.

At the time of the Brochtrup trial, Pete Chisholm was being groomed to take over Dick Snyder’s spot as Mercury’s long time propeller accident expert.

The following comments were made in the Jacob Brochtrup v. Mercury Marine & Sea Ray trial, and used again in Brunswick’s request for a rehearing (dated June 10, 2011).

At that time, annual propeller strikes recorded in BARD were running in excess of 175 per year.

Mercury included Chisholm’s testimony above as a reason for a rehearing in their June 10, 2011 request.

Pete Chisholm had been groomed the last few years to take over as the next industry propeller accident expert as Dick Snyder heads toward retirement. Is Chisholm really not familiar with USCG propeller strike statistics? He is the person who had been speaking for Mercury Marine’s efforts in this field at NBSAC. Pete Chisholm was Chairman of NBSAC’s Boats and Associated Equipment Subcommittee (safety issued with boats and equipment on boats) in 2010 and 2011. If Chisholm did not understand USCG’s propeller accident statistics, even after they were presented many times at NBSAC, did he understand USCG statistics for other types of boating accidents?

The boating industry has repeatedly misrepresented U.S. Coast Guard propeller accident data to the courts, to the public, and to consumers.

People that should be regularly following propeller accident statistics (propeller accident expert witnesses for the major firms, General Counsel for a marine drive company, Chief Engineer of Marine Engineering at a marine drive company) at major industry firms (Mercury Marine / Brunswick, Volvo Penta, Outboard Marine Corporation / OMC) either did not correctly understand how to correctly interpret annual statistics provided by the U.S. Coast Guard, or they deliberately misled others (including the courts).

These are the people that should have been driving for solutions at their respective companies. If they did not understand the statistics correctly, they would have underestimated the degree of seriousness of the problem. As a result, their companies may not have applied the correct level of resources to the problem.

AND EVEN WORSE, if they did not understand how to properly interpret the statistics for propeller accidents (which are sometimes said to represent only about 5 percent of all boating accidents), they did not understand how to interpret the statistics for other kinds of boating accidents. This is a case of an industry either being asleep at the wheel, or of an industry intentionally misleading the public, the Coast Guard, and the courts.

In real life, propeller safety advocates and industry experts have long battled over the number of unreported or under reported recreational boat propeller accidents. But to still be battling about how to correctly read and interpret the U.S. Coast Guard Annual Boating Statistics is ridiculous.

We urge the industry to: