Michael Meyer, about 65, was on a Caribbean cruise with his wife and another couple at St. Lucia on March 10, 2011.

As with many cruise ship destinations, a host of vendors provide tours to local sites, or provide packaged experiences (scuba diving, snorkeling, historical site visits, scenic tours, adventure tours, etc.). Some of those tours are on shore, and some are on the water.

Today their group would be going on a Sail Catamaran trip they had previously booked. During the trip, Michael was seriously injured by one or more of the tour boat’s propellers. 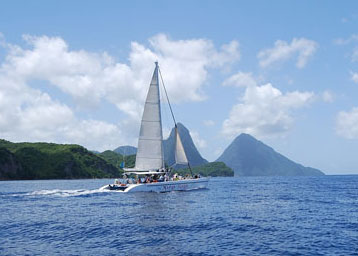 The Pitons, twin peaks, are well known St. Lucia landmarks. Before taking the cruise, Michael Meyer purchased tickets for “Catamaran Cruise to the Pitons”, a cruise related excursion, from Carnival Corporation, a Panama Corporation doing business as Carnival Cruise Lines. The peaks as shown at right with one of Sea Spray’s smaller sail catamarans in the foreground.

A group of perhaps interrelated businesses was involved in conducting the shore excursion:

They are marine common carriers and own or operate/charter the M/V Tango Too, a 80 foot diesel powered Sail Catamaran (Sail Cat) capable of handling 150 passengers, the vessel used during Michael Meyer’s Catamaran Cruise to the Pitons.

The morning of the Piton tour, about 70 to 80 people met at the bottom of the cruise ship gang plank at the Port of Castries. Someone met them and led them down the pier to the excursion vessel, the Tango Too. They boarded, and Michael sat in the next to last row of wooden chairs near the stern.

Michael’s wife recalls there were three crew members on the vessel. A lady announcing what they were viewing on the microphone, a many serving sodas, and a male pilot. All three were black.

The passengers were welcomed on board, a P.A. system announced location of the bathrooms, and that refreshments would be served in 15 to 20 minutes. Michael recalls no safety related announcements. The vessel left for the Pitons. The P.A. system pointed out the Pitons, and they stopped in an inlet to swim for about 30 minutes.

The captain said he was going to put a ladder down in front from which they could walk to the beach, and they were welcome to jump off the side. A crew member unhooked a rope gate across a gap in the the side of the hull to open up a passage to jump from next to where Michael was sitting. Two men jumped and Michael asked the 2nd man how the water was. He said its nice. Michael told his wife he was going to jump in, and he jumped off the port side 5 to 10 minutes after the first man jumped. Michael remembers no instructions given at the cove as they were coming in to wait for the captain’s go ahead before jumping from the vessel.

Michael jumped off the Tango Too feet first. He went under the water and felt himself being pulled to the left toward the back of the boat. He was being sucked under toward the propeller. He kicked with his foot and thinks that is when his foot was cut. He was pulled down again and cut in the legs, buttocks, and his right elbow. When he made it to the surface, he screamed, Help!

When he reached the surface, he could hear the engine running, he had not heard it running when he was on board. The water was rough when he surfaced. He is not sure if that was from a current or from the spinning propellers.

His wife responded to his scream and two or three crew members jumped in to help him. They put a life jacket around his neck. They took him to the beach and covered him with a towel so he could not see his feet.

Two female nursed on vacation put tourniquets on his legs. Someone said, lets get a truck. Eventually a pickup truck came and took him to the top of a big hill where it was met by an ambulance. From there, he and his wife were taken to a general hospital in a long, very bumpy ride. 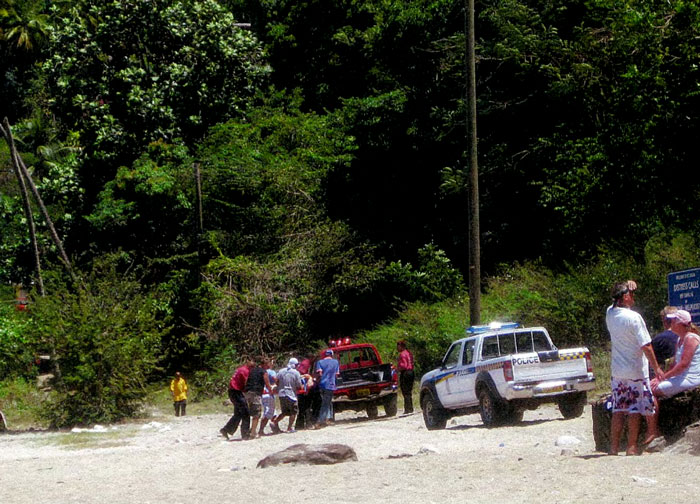 Some photos of a crowd standing around Michael on shore as others tend to him, also show a young man on a burro watching the proceedings.

The general hospital cut his bathing suit of and wrapped his legs to slow the bleeding. They managed to stabilize him in a few hours.

Michael later described the first hospital as, “It was like, it was horrible. It was the scariest broken down place I ever saw with a ripped torn screen door and flies all over. It was scary as hell.” (Meyer deposition pg. 383).

The first hospital (the general hospital) was later identified by Lera Toato, the tour guide, as Soufriere Hospital.

When he arrived at Tapion Hospital two doctors looked at him. They told him he needed surgery and he had to pay them or they would send him back to the general hospital. He gave them his American Express card, but thought they should have accepted his insurance.

A priest came to visit him in St. Lucia, Michael said he was Jewish. The priest said he needed all the help he could get and said a prayer over him.

Michael Meyer then spent eight days in Tapion Hospital before he was flown back to Phoenix.

Geography of the Meyer Propeller Accident

With many locations, hospitals, and sites involved, we created a Google Map to illustrate the locations in St. Lucia related to the Meyer incident.

Initial Recovery After Returning to Phoenix

Note, we provided more personal details of his initial recovery than we typically do due to these details being gone over repeatedly in the documents surrounding the legal case that resulted from this accident.

When Tapion Hospital discharge him, they told him to follow up with medical care when he got back to Arizona. When he landed in Arizona on what he thinks was a Saturday from what he thought was a direct flight, he went straight home. Monday morning he was at Dr. Devito’s office (his primary physician). Michael was not able to walk, but he was able to hop around with a walker.(Meyer depo pg.411)

Michael went back to Dr. Devito about a day and a half later, he removed the wrappings and told Michael he needed to get to some wound care immediately. Dr. Devito had Yavapai Regional Hospital home care nurses come by Michael’s house every day to change his dressings.

Michael went to Yavapai Hospital about 12 days after returning to Arizona and they said a rotten smell was coming out from behind his right knee. They looked at him in the emergency room and immediately transferred him by ambulance to Scottsdale Osborn Hospital for Infectious Disease. They gave him some antibiotics and told him needed to see a plastic surgeon.

The plastic surgeon (Dr. Mazaheri) told him the skin was rotting behind his right knee and was not going to heal. They needed to do skin grafts. The next day the plastic surgeon removed the bad skin, then about two days later the plastic surgeon took skin from his upper thigh and put it in some locations on his right leg. That surgery occurred about 13 days after he returned to Arizona. The surgery went well and he paid for it with his Humana insurance which may have billed some of it to Medicare. Dr. Mazaheri did not look at his left leg because it was all bandaged up.

Dr. Mazaheri did remove some hardware (pins) from Michael’s foot that had been placed there during a surgery in St. Lucia.

Michael remained in the hospital at Scottsdale for about 15 to 16 days. He laid with in bed with his foot in a splint because the doctor did not want him to move. Then Scottsdale discharged him and recommended having his left leg treated at Yavapai County Wound Care. Scottsdale had seen some spots that looked like they were opening up and bleeding.

They took the splint off his leg about a month after the accident.

Michael’s wife drove him in to Yavpai County Wound Care twice a week for about five or six months.

Michael Meyer did not go through physical therapy. The hospital in St. Lucia gave him a walker when he left. During his deposition he had the walker with him because he had recently undergone back surgery. He is now getting physical therapy for his back and legs. He started complaining about back pain to his family physician as soon as he returned home from St. Lucia.

Michael has trouble maintaining his balance for a period of time because his achilles tendon was cut during the accident. His family physician sent him in for some x-rays, a cat scan and an MRI. (as of the time of his deposition).

Michael Meyer’s basic wounds are discussed in our coverage of the accident. Basically, he was struck in the feet, legs, buttocks, and on one elbow.

In his deposition he notes he was visiting with doctors in St. Lucia about flashbacks. They told him they would pass, just try to train your mind to think of something else.

In Michael’s deposition, the defense attorney says, “You’re claiming there’s some lacerations?” and get Michael to describe their locations: on both legs from his achilles heel up to the knee, his right buttock, and his right arm below the elbow.

He has seen a psychologist in regards to his recent back surgery. His medical doctor told him he gets very emotional when he speaks about the accident so he would have someone come by and visit with him about dealing with those types of issues.

Dr. Mazaheri told him to stay away exposing his wounds to chlorinated water for a while because he did not want chlorine in the wounds and to be careful his wounds did not open up. Beyond that, no limitations were placed on him by physicians.

Michael notes he has trouble balancing himself beyond short periods of time due to severing his achilles tendon. (as of his deposition)

He lives in a two story house and its painful to climb the stairs so he moved most of what he uses downstairs.

He has two vehicles. He is no longer able to drive one of them due to his injuries (its sets too high).

As with many over 40, Michael Meyer had some medical conditions before the accident. He has diabetes and had undergone upper thoracic surgery for disk in his back within the last year. His back injuries have not been positively tied to his accident.

While he was going to Wound Care, Yavpai had a kidney doctor come in. They told Michael he had a problem with his kidneys that could be caused by trauma. They were not functioning as well as they should be. He still goes back every three months to see his kidney doctor. (Meyer depo pg.429). These complications have not positively been tied to the propeller accident.

Michael noted his legs are so scarred he does not feel comfortable wearing shorts in public.

His wife really loves photographs and albums. She was sad they were not able to post some photos of their trip of Facebook due to the accident and all the memories they bring back. She was also sad they were not able to see some of the other stops along the cruise after Michael’s accident. But she feels blessed that she did not jump in when Michael did, otherwise they could have both been struck by the propeller. (H. Meyer depo pg.132).

Since the accident she has been caring for her husband, plus driving him to his medical appointments.

Michael Meyer continued to have medical complications and filed suit against Carnival Cruise line and others for his injuries and damages.