The U.S. Coast Guard requested public comments on an Industrial Economics Incorporated (IEC) report, “Estimating the Benefits of Reducing the Risk of Recreational Boating Accidents: Alternative Sources of Information on Fatalities, Injuries, and Property Damages” by August 27, 2013 in docket #USCG-2013-0437. The report was funded by USCG to investigate how underreporting / under reporting of boating accidents, injuries, fatalities, and property damages in USCG’s Boating Accident Report Database (BARD) might be modified to allow a more accurate estimate of the cost of boating accidents.

We filed our public comments today (August 26th) via Regulations.gov and encourage any who have not yet done so to do the same before the deadline (midnight Eastern Time Tuesday night August 27, 2013 as I understand it). We especially encourage boat builders and marine drive manufacturers to file public comments on the report.

Our comments are available at Our Public Comment Letter.

Our comments were pretty long, but we tried to especially draw attention to three major flaws in the report.

IEC reviewed the databases and previous USCG studies of underreporting. IEC decided fatalities were well captured by BARD. However, hospitalizations, and injured beyond first aid but not hospitalized were not. IEC developed multipliers to adjust the BARD counts to the counts of the database selected as best representing that severity level. IEC then proceeded several steps toward converting these new injury by severity counts into costs of injuries and fatalities.

The three major errors we identified pertained to the process used to select the “multipliers” to convert BARD counts into more accurate counts. IEC used the direct ratio of the two counts (selected database count/BARD count) to create their multipliers. In doing so, IEC:

1. Assumed all the injuries in BARD at that severity level had also been captured by the database they selected. They failed to try to cross match the entries to see if there was some overlap between them, with some being only being in BARD and some only being in the database selected.

2. Failed to consider some injuries might not be reported to BARD or to the selected database, as seen in the Venn Diagram below. 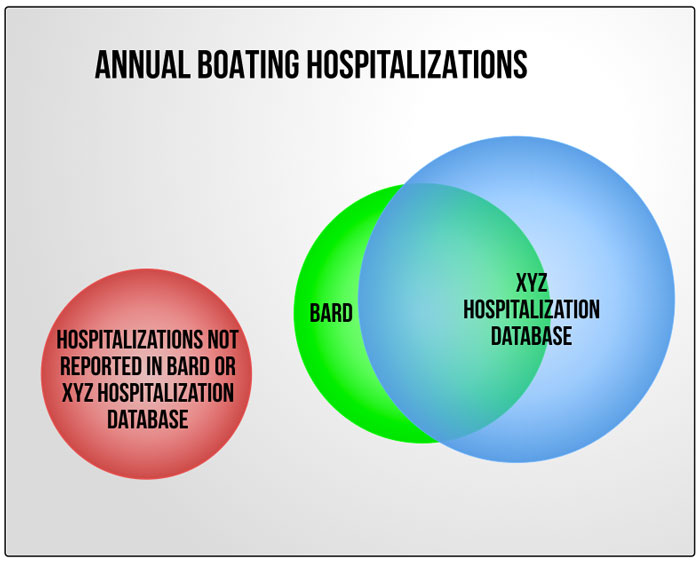 3. Failed to use a well established process to estimate the total number of accidents, injuries, or fatalities from two relatively independent databases.

IEC accepted BARD fatality counts, then applied their technique to injuries beyond first aid but not hospitalized, and to hospitalizations. By not recognizing the three errors above, IEC’s calculations are flawed.

We spent considerable time and effort on our comments and encourage those interested in under reporting of boating accidents to read them. You will need to study the IEC report, Estimating the Benefits of Reducing the Risk of Recreational Boating Accidents first for our comments to make much sense.

Those studies are listed in our late 2011 post encouraging college students seeking senior design projects to select one tied to under reporting of boating accidents, and in the bibliography of our comments on this report.

One interesting point of the IEC study was their estimation of 260,000 boating injury visits per year to emergency rooms, outpatient visits, and doctors offices that did not result in hospitalizations or fatalities. That represents about 120 times the number of similar injuries reported in BARD.