Children and adults have been falling off the bow of pontoon boats and being stuck by the propeller for decades. A typical scenario involves children sitting on the bow, outside the fence, with their feet dangling in the water as the boat moves forward. They hit a larger wake or wave and are pulled overboard by their feet, or the boat operator suddenly slows the boat and they rotate over the bow. Either way, they hit the water while the boat is still advancing. The operator quickly pulls the boat to neutral but it is too late. They hear a thud from the child’s body hitting the propeller and the water quickly turns blood red behind the boat. 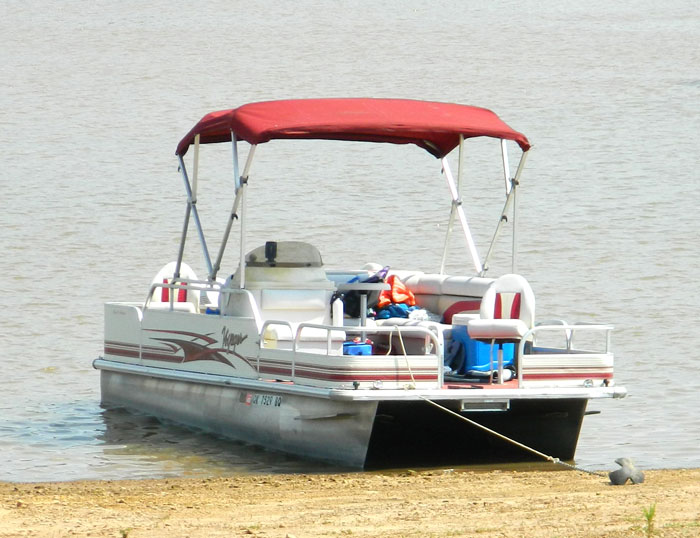 This post will identify some ways to prevent these accidents. We will not focus on the contributions of rapid access to onsite medical care and quick transit to a major trauma hospital.

We will identify many of the tools available to those trying to reduce the frequency of certain types of boat propeller accidents, determine which ones have already been applied or are perhaps already maxed out, and identify opportunities not being currently maximized to reduce the number of children, youth, and adults falling over the front of pontoon boats, many of which are struck by the propeller.

Several tools are available to those trying to prevent recreational boat propeller accidents. It’s like each of them is a blade on my Swiss Army Knife. Several of those tools are identified in the graphic below. Each “blade” addresses the problem in a slightly different manner. 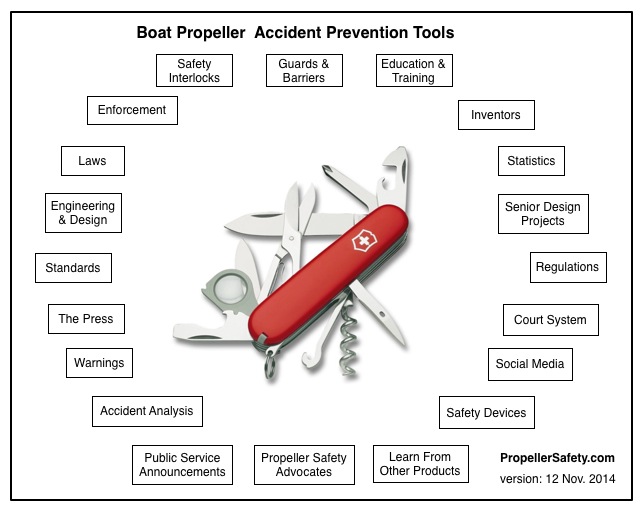 We will begin gradually going through each blade / tool, theorizing how that tool might be applied, and making an estimate of residual opportunity of that tool (how much more improvement could be gained from that particular tool).

Statistics is usually where we begin. How many of these accidents are happening, how many people are being injured and killed. While these basic questions should be answered by the U.S. Coast Guard Boating Accident Report Database (BARD), they are not. There is no accident code / classification falling over the bow. They have to identified by carefully reading the “redacted narrative” (a verbal description furnished beginning with 2008 Releasable BARD, the public version of BARD from which all personal details have been redacted). Among the almost countless accidents not observable in Public BARD are:

See our iceberg chart for our previous discussion of challenges to identifying accidents in BARD for accident types which do not have a specific classification.

Even with all these limitations, we identified over 150 accidents in which someone fell over the bow of a pontoon boat, most of which were also struck by the propeller.

While we were unable to determine even the number of such accidents reported in or to BARD, the sheer magnitude of the number of accidents we identified speaks for itself. The inability of BARD to accurately supply statistical data should not be a hindrance in recognizing the need to move forward and address this particular problem. However, we need to remember that similar counts have been identified for kill switch preventable propeller accidents and the industry has still failed to respond to that issue.

In this instance, it is quite obvious that many of these accidents occur from:

While it is true that some additional analysis could be done to prioritize these issues, we suggested they should all be addressed. But, attention should first be focused on bow riding because of its frequency, and the large number of children injured or killed while bow riding.

Human behavior often contributes to accident scenarios described above in the form of:

Alcohol appears to be the drug of choice at the moment, however the legalization of marijuana in some states and circumstances may create another class of bow riders in the future. Alcohol is not commonly listed as a contributor to pontoon boat over the bow propeller accidents involving children, but alcohol does come into play with over the bow accidents involving adults.

The bottom line, is we do not think a lot of accident analysis needs to be done at this stage. The primary scenarios and contributors have long since been identified. The problem is how to change the behavior of boaters. That will be addressed by several other “blades”.

In our opinion, engineering design is one of the most overlooked opportunities for preventing pontoon boat over the bow propeller injuries. This segment of our coverage is fairly long, so we moved it to its own page: Preventing Over the Bow Pontoon Boat Propeller Injuries by DESIGN.

Many states have regulations against bow riding. Similarly many states require children to wear life jackets when underway.

However, these are voluntary standards. The standards related to pontoon boat rails and gates could be coded into state or federal regulations requiring them to be followed.

Laws against pontoon boat bow riding could be more stringently enforced. Sort of a “throw the book at them” approach. While one does not want to place financial hardships on young families, or have them have a bad boating experience, it could prevent them from having a much worse experience.

Stop Propeller Injuries Now (SPIN) launched the idea for a safety program at the November 2014 National Boating Safety Advisory Council (NBSAC) meeting. They suggest using the press as an ally against a wide range of boating accidents. Prepared statements enforcing various safe behaviors could be made available to the press for inserting into boating accident stories. So when an accident is reported in the media, the report would often be accompanied by a relevant safety message.

In the instance of bow riding pontoon boats, a range of statements about the hazard of bow riding could be made available to the press for quickly inserting into their coverage of pontoon boat accidents. The statements could be made available to the press online in various lengths, along with some images, to allow reporters to easily copy and paste selections into their articles, along with some statistics.

Social media provides a unique opportunity to reach out to parents, youth, and even children and explain the hazards of bow riding. Everything from educational materials, videos, even pledge cards (I pledge I will not bow ride) could be made available, in English and Spanish.

We need to make sure high risk boating activities are not glamorized on Social Media any more than some already are.

Decisions in the courts have driven the boating industry to take action on certain problems. Installing kill-switches in the late 1970’s and early 1980’s is an example. Addressing Personal Water Craft (PWC) off throttle steering issues in the 1990’s is another example.

While we do not promote this course of action to drive change, it exists. If the courts recognized the existing available alternatives, approaches, and actions, along with the true statistics behind the issue, they might take more drastic action which could lead to the industry addressing the bow riding issue.

When faced with a problem, we often look for potential solutions used against other similar problems.

Car surfing, the act of riding on the outside of a car being driven by another person (often on the hood or roof), is a relatively similar event. Young people are attracted to the idea, it looks cool, is fun to do, but any quick changes in speed or direction, or a bump can dump them to the pavement where they may suffer severe head injuries and be ran over as well.

Social media, just discussed, was tool for spreading car surfing. YouTube showed videos of car surfing and many wanted to emulate those videos.

Car surfing accidents quickly began to occur in areas that have not been broadly exposed to the act and its dangers. Parents who never heard of car surfing were racing to hospitals to be with their children they just fell while car surfing. We even saw it here in somewhat rural Oklahoma. Growing up in a more rural area I have seen youth, teens, and young adults try other somewhat similar activities I will not mention here. At their age, when faced with a thrilling/risky activity, they often:

Studies of how the popularity of car surfing dwindled after many communities suffered accidents might lead to some ideas that could be applied to pontoon boat bow riding.