I attended day one of the 19-20 September 2015 Nichols Marine Tournament Series Championship bass tournament at Wolf Creek boat ramp on Grand Lake. This was a chance to see the Wolf Creek ramp facilities in action during a large tournament (195 boats) prior to the Bassmaster Classic in March 2016 as well as to test out some of our gear in that setting.

Prizes were significant, including a Ranger Z119c with Mercury 225 Pro XS for first place, and a Triton 189 TRX with a Mercury 150 outboard for second.

They used a large tent as headquarters for the tournament. 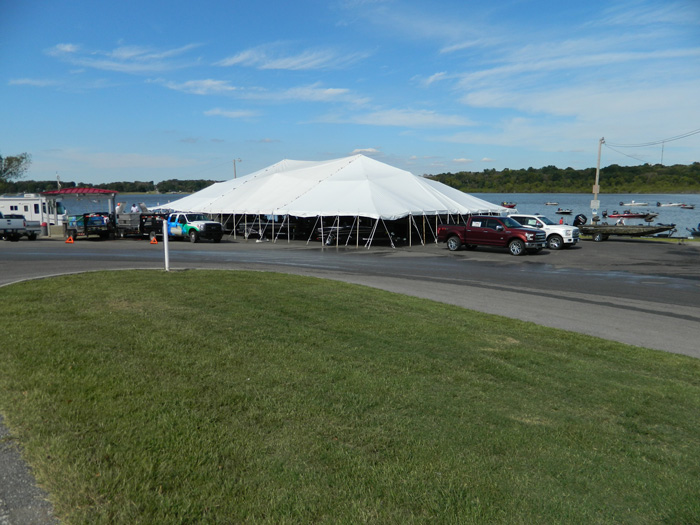 We will open our coverage with some of the safety features we saw in new boats on display by Nichols Marine under the tent.

Triton had a grab rail for the passenger and a foot brace for them as well. Solid bracing for passengers is especially important to prevent ejection as they do not have a steering wheel to try to hang on to.

The vessel also bears a warning about high speed turns. “Sudden turns above 65mph may cause loss of boat control which could result in serious injury or death. Reduce speed before attempting a sudden sharp turn. Read owners manual for additional information.”

Although its hard to see in the image below, just above the sharp turns at high speed warning, is a carbon monoxide warning grouped with a propeller warning, “Rotating propeller can cause serious injury or death. Shut off motor when are persons in water.”

We often see new boats at boat shows with no warnings on them at all. Yes we know manufacturers often stick them on later, but its good to see these builders putting warnings on their boats for display. 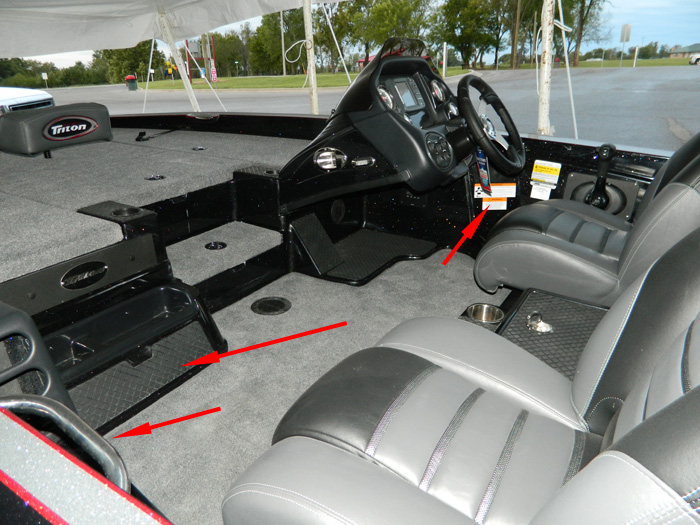 A Ranger on display has a swim ladder on the transom that can be deployed from the water. That is critical when everyone is ejected and the operator was wearing their kill switch lanyard. Its very hard to reboard a boat without a ladder. A ladder won’t make your bass boat drownproof, but it can will sure help. While most new bass boats now have ladders, many older vessels do not. If your boat is among those, we encourage you to install a swim ladder that can be deployed from the water. The old idea of trying to crawl up the outboard motor is very challenging, and a slip can cut your foot off. 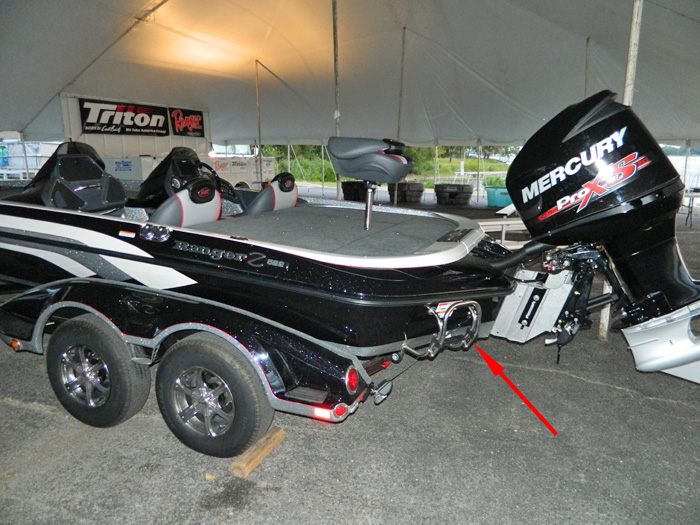 This photo shows a Hot Foot throttle on a Ranger on display. Hot Foots serve two propeller safety roles. They serve as a backup for your kill switch in the event it fails or the operator forgets or fails to attach the lanyard. The foot throttle will slow the unmanned boat to an idle but not stop it. Their second purpose is they allow the operator to grip the steering wheel with two hands which reduces the probability the operator will be ejected. Note this HotFoot is mounted to an adjustable slide to allow the operator to adjust it to the most comfortable position.

The photo also shows some foot braces Ranger includes for the operator for comfort and to help prevent ejection, plus the propeller warning. 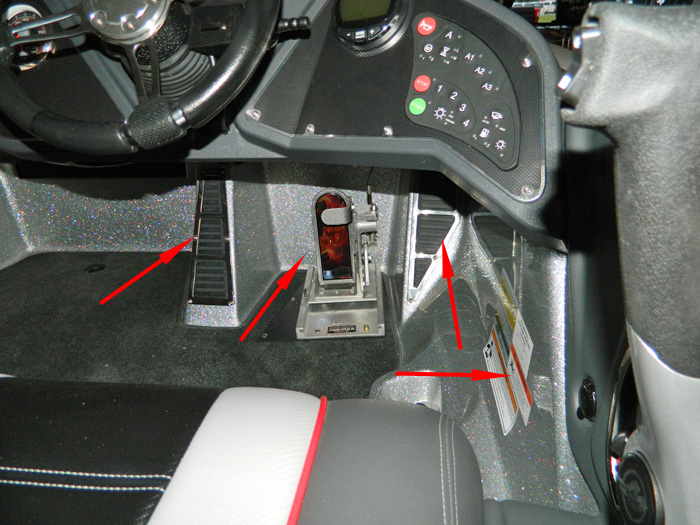 Ranger also showed a passenger grab loop and foot braces for the passenger and operator. All of which can help prevent ejection. 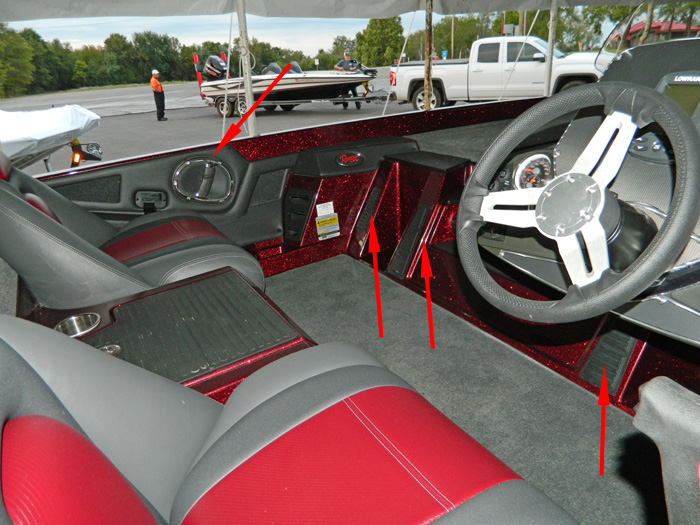 Discussion – while the safety devices and warnings above are not perfect, they illustrate what we already knew. The flagship tournament ready models from bass boat manufacturers frequently chosen by the pros (Ranger, Triton, etc.) are leading the way in deploying safety features compared to lower tier bass boats builders. We know cost is an issue on smaller and more economical bass boats, but innovation and education of both builders and potential customers can at overcome those challenges in some situations.

We encourage the iconic bass boat builders to continue their efforts, to spread those features throughout their product lines, and the rest of the pack to follow a little faster.

If Ranger, Triton and other iconic tournament bass boat builders are looking for a place to focus their future safety efforts, we encourage them to take a look at preventing today’s large outboard motors from breaking off and flipping into bass boats after striking floating or submerged objects. This project is probably best served by them working in conjunction with drive manufacturers. See our 2013 paper on preventing outboard motors from flipping into boats.

Now on with our coverage of the Nichols Marine Tournament Series Championship.

I started photographing the bass boats launching in the predawn light. 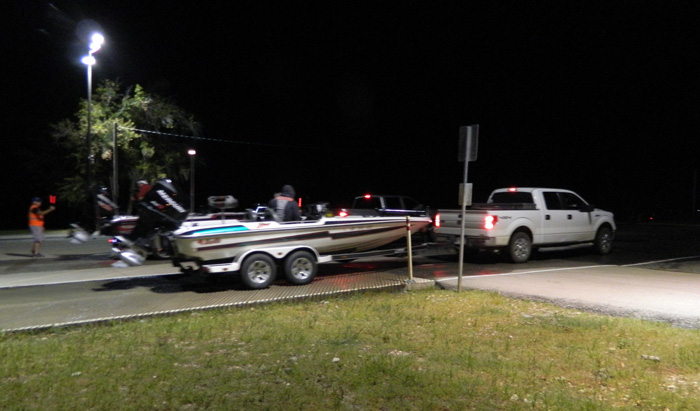 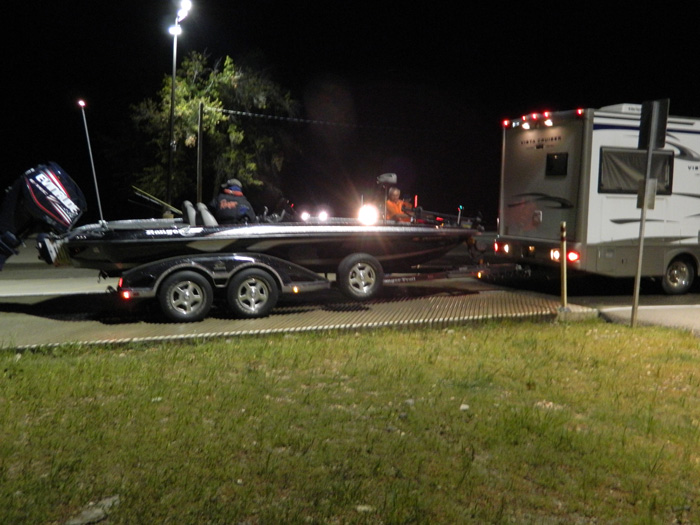 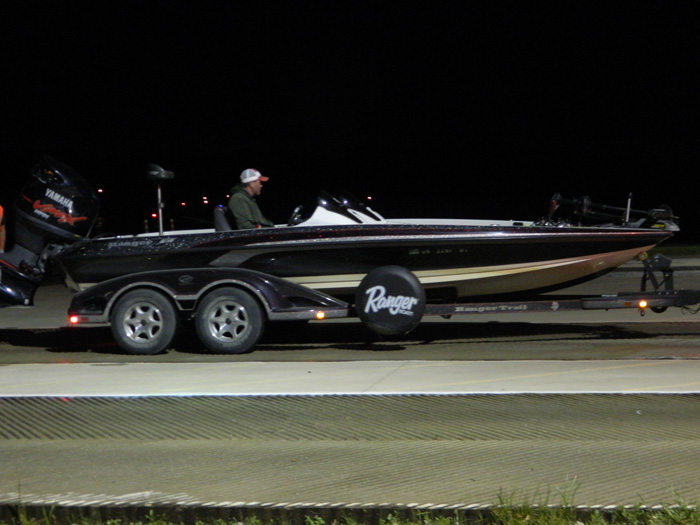 One takeaway from this test run is we need to get a camera with better low light capability before the Classic. I was bracing the camera against a pole to reduce vibration while shooting from a little bit of distance without a flash to not create a distraction. The nearby pole light created some light, but obviously not enough for this camera/lens combination.

Once launched, and everybody went through their nervous preparation rituals, the boats gradually began to line up and the blast off began. 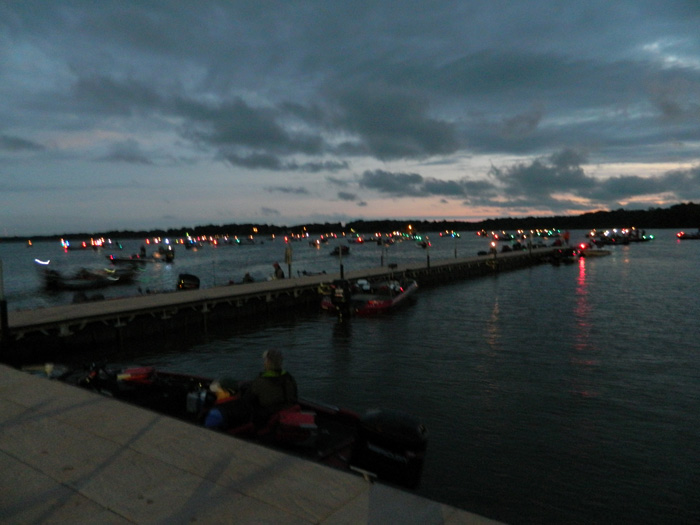 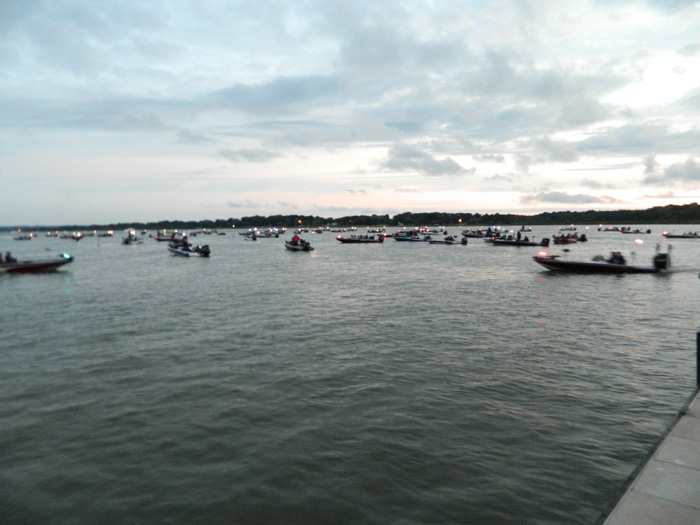 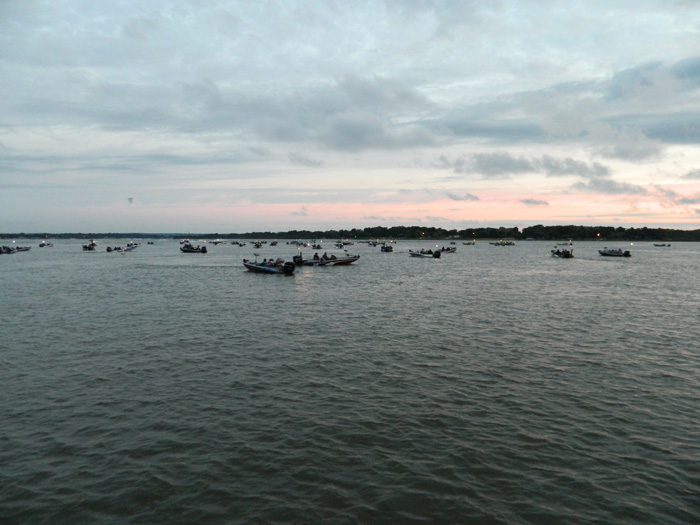 A few left to go, the line is in the distance on the right as they go from right to left.

A takeway for us after trying to film the blast off from a distance, is a drone would be nice, but I don’t see one in our near future. We have plenty of other hardware to master first. Since this tournament we purchased a sports camera similar to the GoPro with a large number of accessories. We are happy to see GoPro is among the Classic sponsors. We have already been running ours underwater. We will see if we can increase our zoom capabilities a little before the Bassmaster Classic.

I began wandering around Grand Lake shooting photos and actually went fishing with someone I met. I was also able to test some of our new GPS gear and mapping software during the tournament and fishing trip. We should have it up and going by the Classic. Somewhere during that process I photographed the truck and trailer used to return the bass caught in the tournament back to the lake in good condition. 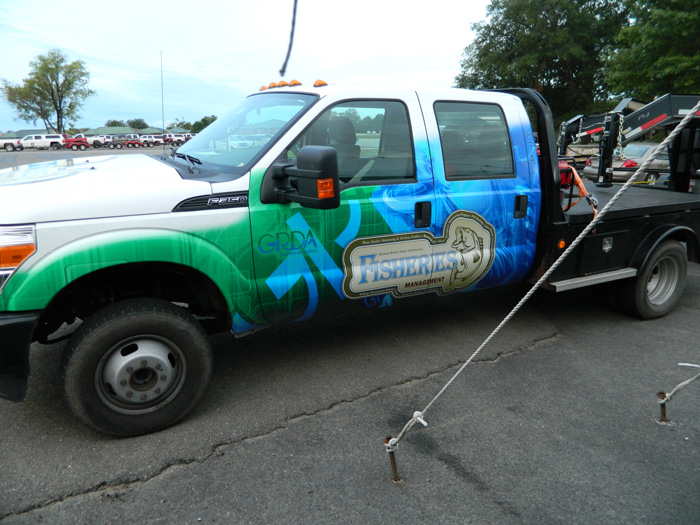 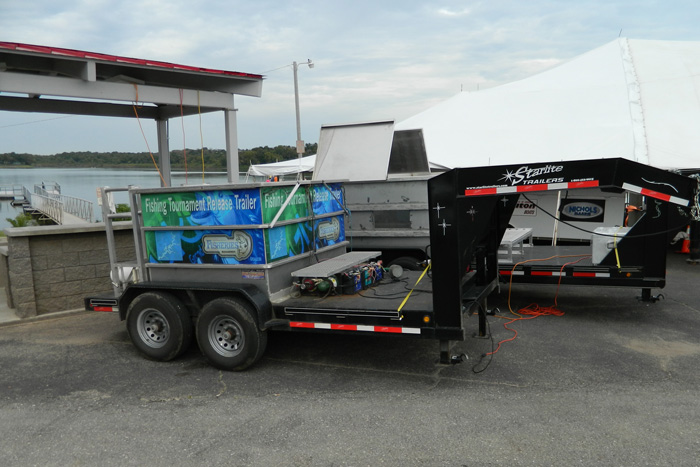 As the day ended, the boats began to return in waves as the weigh in was conducted in a series of flights due to the size of the field. 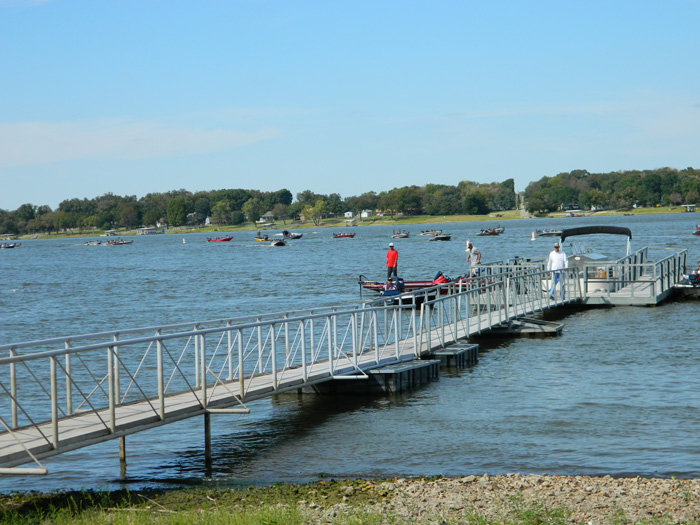 Lined up coming back for the weigh in. They are coming from left to right. Nichols Marine Tournament Series Championship, Grand Lake, September 2015. 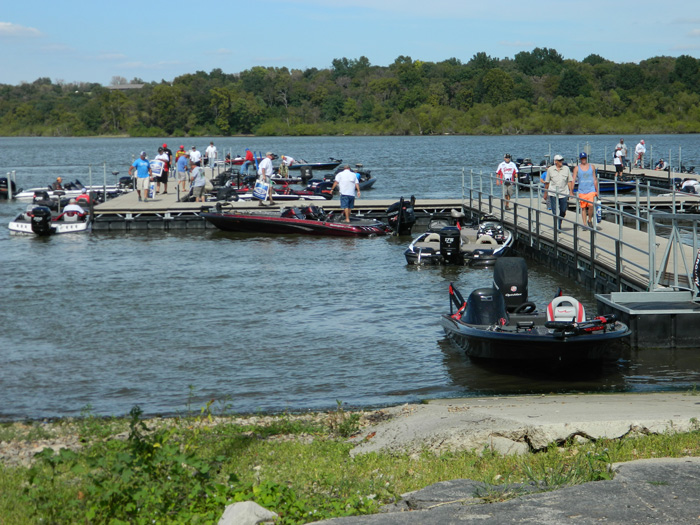 A nice portable, trailer based weigh in platform / counter was used. The MC did a nice job of trying to keep the crowd interested with personal stories and facts. 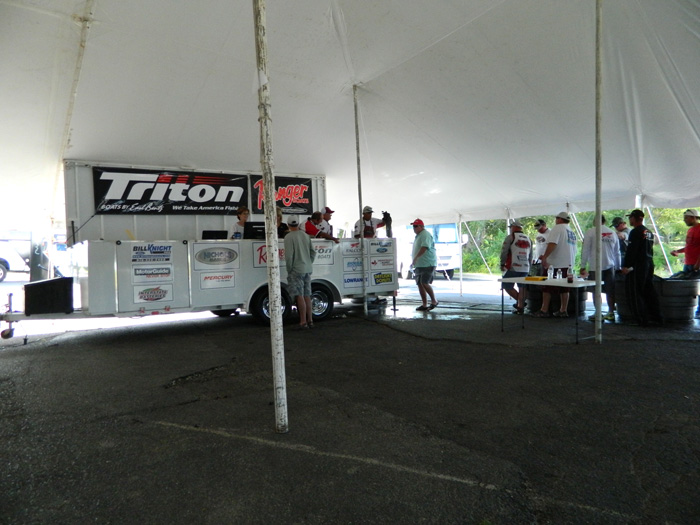 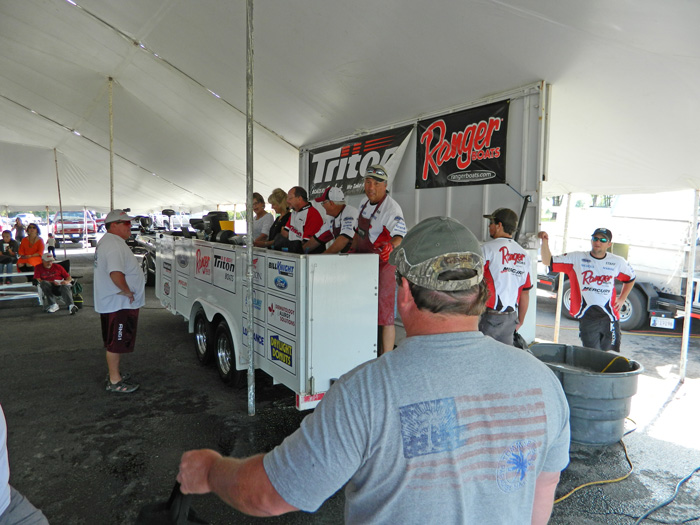 They used a nice series of aerated cattle tanks to help keep the bass alive as anglers waited in line for weigh in. Staff weighed them pretty quickly and the use of multiple flights helped reduce any potential wait times. Bigger fish were shown, and really big fish were photographed. 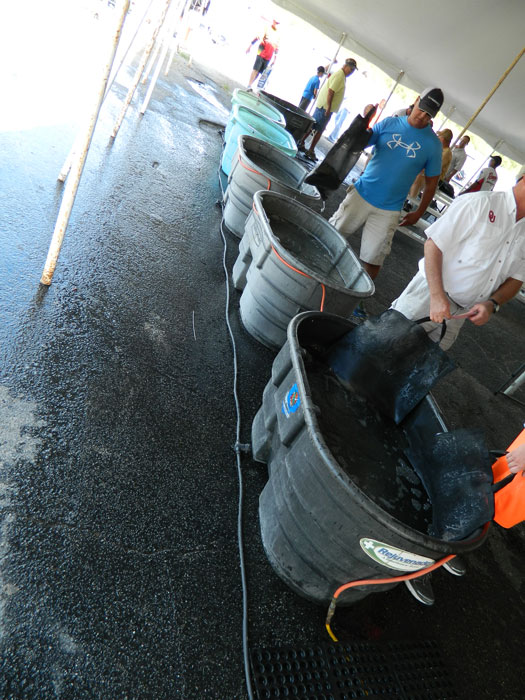 On the way out I photographed one of the many wrapped vehicles. 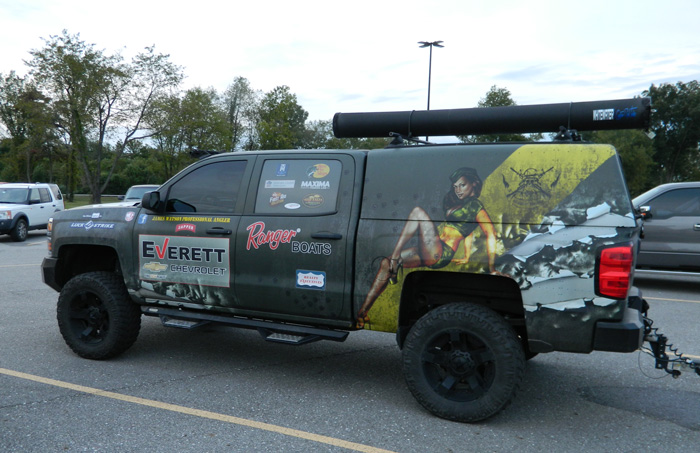 We are hoping to get a look at the recent facility upgrades at Wolf Creek boat ramp / Wolf Creek Park before the 2016 Classic. We shot some photos back in May 2015 of the facilities.