This paper develops a new mathematical model for how boats accelerate during a high speed test run. The process divides a top speed run into two segments, namely a displacement segment and a planing segment. The equation only requires three coefficients for each segment. Each coefficient is independent of the others. Additionally, each coefficient has a meaningful value tied to an attribute of the data. A version of the same model applies to boat coast down data. Previously, some have used polynomials with meaningless coefficients to curve fit coast down data.

This work has been a monumental project on our side. I worked on it off and on for over thirty years.

We hope this report brings new insights to the math and physics behind how recreational boats accelerate and coast down (decelerate). Applications include comparing performance of one boat to another or to itself with modifications. The model identifies differences in performance and the magnitude of those difference. It can also be used to show when those differences occur during a top speed run.

About This Document Itself

This work recently inspired us to digress and take on a spin off boating safety project. Hopefully it will inspire others to do the same.

The document itself is 142 pages in length and about 5 megabytes in size. It contains over 50 images, many of which portray data from actual test run data.

The full paper is best viewed on a large desktop computer monitor. 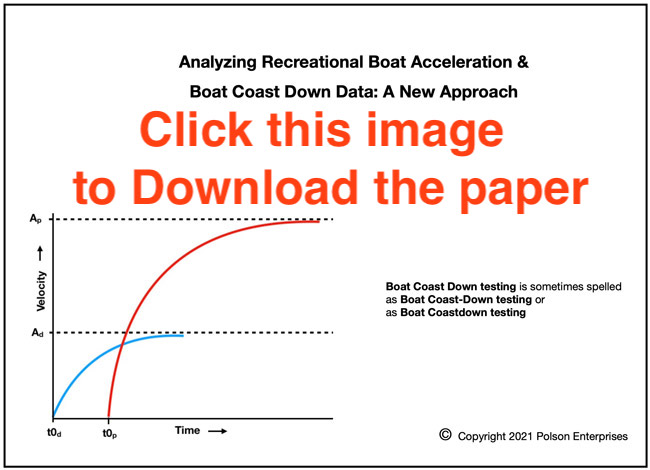 We hope this paper:

To those motivated to collect boat test data and replicate our findings, you do so at your own risk. We assume no liability for anyone attempting to collect similar data. We refer those thinking about it to page 99 of our paper for some safety information.

A VERY Quick Introduction to the Method

Step 1 – A boat is tested. It is ran from being at rest to top speed while velocity data is collected several times per second. 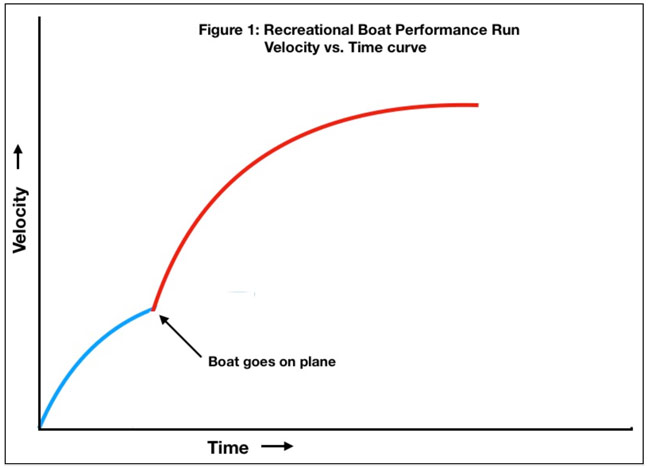 Most planing boat top speed run velocity curves look something like the curve above. The boat accelerates from zero in displacement mode. The actual acceleration at time = 0 is equal to the slope of the velocity curve at time = 0. Next the boat transitions to planing. Then it accelerates again, eventually reaching top speed.

Step 3 – Envision both curves above beginning at the x axis, arcing upwards, and extending to the right. The curves you are imagining would look like the curves in the image below. 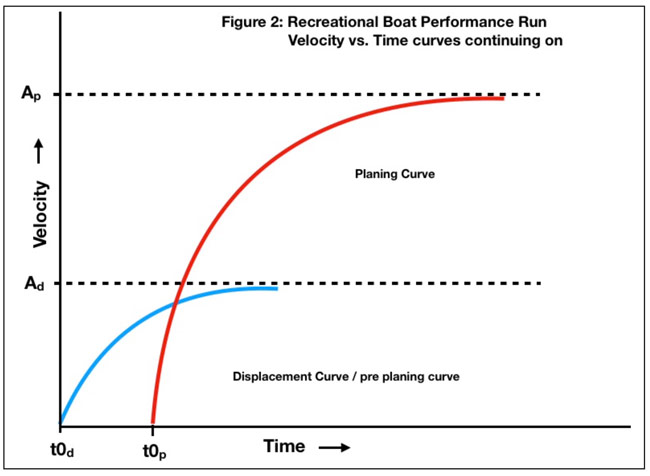 t0d represents the moment the boat was thrown into full throttle and began moving in displacement mode.

t0p represents the theoretical moment the boat would have been thrown into full throttle if it had actually taken off in planing mode instead of displacement mode.

The portion of the planing curve (red curve) that lies below the blue curve (displacement curve) represents a virtual path that did not exist in real life. However, it is import in modeling the curves.

We found both curves could be fit with an equation of nature of:

The particular equation above has “D” subscripts and represents the displacement portion of the top speed run.

bd = a measure of how quickly the boat decelerates

e = a scientific constant equal to approximately 2.718, the natural logarithm of e or ln(e) = 1

An identical equation with “P” subscripts represents the planing portion of the top speed run.

Figure 26 shows how we used Curve Expert Pro to curve fit the planing portion of a top speed run. It also shows how closely this model fits the actual data. 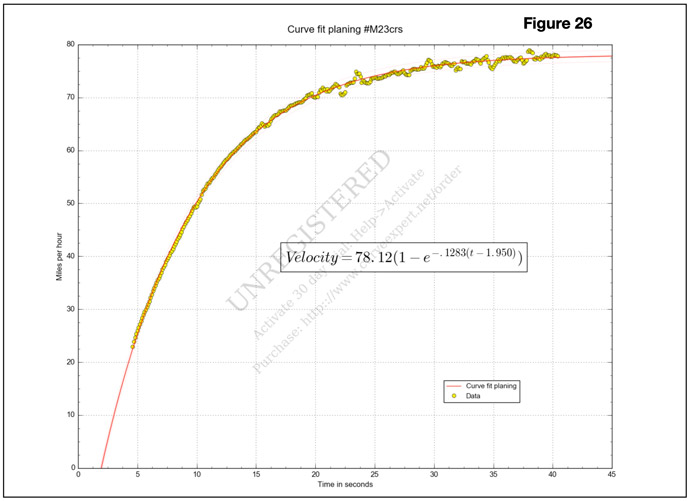 Representing a top speed run in this manner with a total of 6 coefficients brings many things to the table. For example, it allows top speed to be accurately estimated from just a snippet of data from the planing portion of the curve. This is important in situations if which a test crew wants to know the top speed of the vessel for comparison to previous versions. However, they does not have:

Additional Insights can be gained from Top Speed Run data

Propeller slip is calculated from displacement (distance traveled) data during each time step.

Acceleration data provides a measure of what it feels like to be on the vessel as it takes off. It also provides insight into passenger stability during acceleration and deceleration. 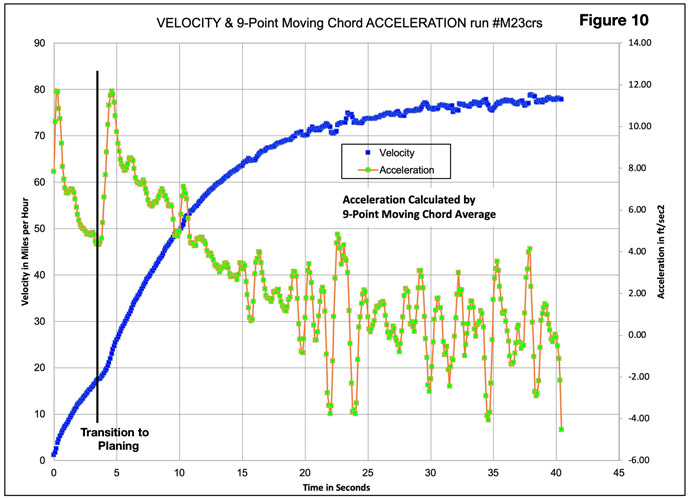 Figure 10 above plots Acceleration vs. Time. It provides a look at what happens in the transition zone from displacement mode to planing mode. The discontinuity about 3 seconds into the run is much more obvious than anticipated. 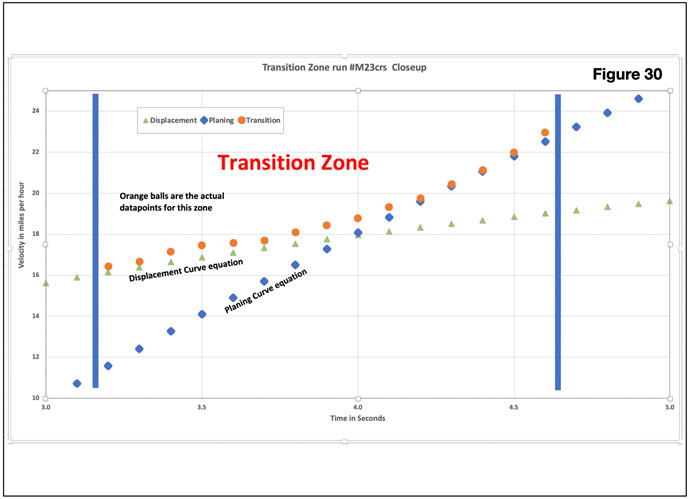 We calculated a time constant from “b”, one of the three coefficients. The time constant determines how how long it is going to take for the vessel to reach top speed. 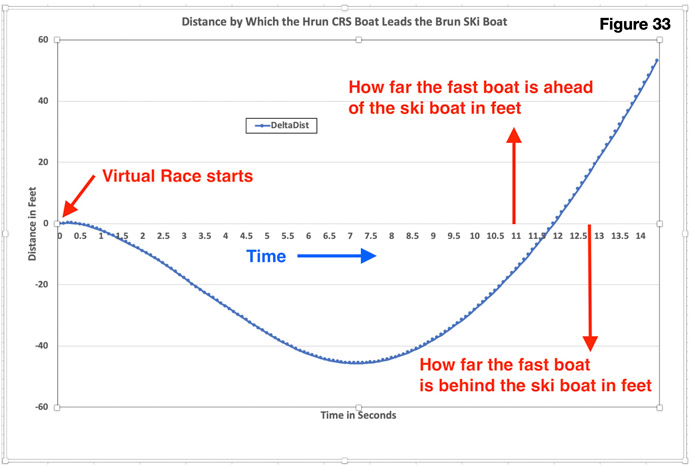 Figure 33 above displays top speed run data. It provides greater insight into how two top speed runs compare. Much more insight than just looking across at time to 20 mph, time to 30 mph, and top speed data.

Quick History of Coast Down Testing in General

Coast down testing has been performed on cars, semi-tractors with trailer, bicycles, and sport wheelchairs to estimate drag. The most simple method is to find a long, level, straight stretch of road (or gym floor for wheelchairs). Then get the vehicle to a given speed, shift to neutral, and see how far the vehicle coasts during coastdown. The further the vehicle coasts, the less drag.

Sport bicycle riders coast down test to see how changes in rider position / posture during a ride impact drag without using a wind tunnel. Some bicycle coast down tests have been performed in long hallways to avoid wind effects.

Society of Automotive Engineers (SAE) turns the coastdown concept around to estimate road load (the resistance supplied by the road). They conducting vehicle coastdown tests to determine road resistance. Then they program that resistance in to dynamometers for mileage testing. See SAE J1263 and SAE J2263.

Boat Coastdown testing is conducted by:

A total run from zero to top speed and back to zero is shown in Figure B-1 below.

Propeller force can be calculated from the mass of the boat (and all the stuff and people on it) and the deceleration at the moment the boat is thrown to neutral. If you know the prop thrust at top speed you also know the sum of all forms of drag at top speed.

You can see the effect of this drag in Figure B-4 below. About 20 seconds into the run the boat was no longer accelerating. The boat was slammed to neutral, propulsion force immediately went to zero, and drag quickly began to decelerate the boat. 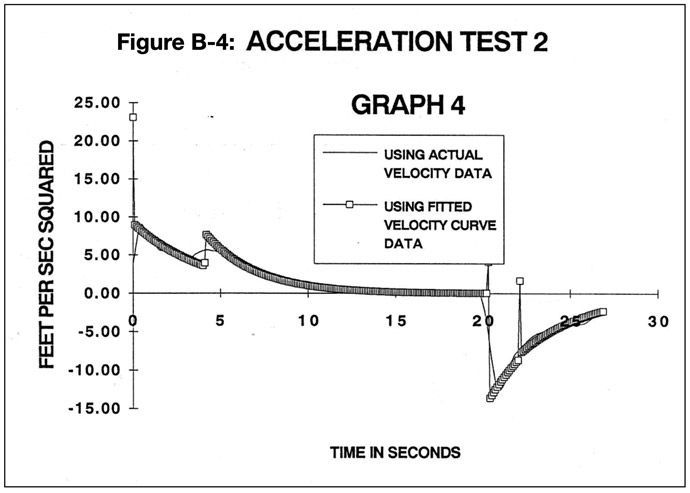 The other variables have the same description as before.

Vpcd = Velocity during planing portion of coast down

e = a scientific constant equal to approximately 2.718, the natural logarithm of e or ln(e) = 1

Additional insights can be gained from boat coast down data

We learned a few thing for those who try to replicate this work:

Note this model does not specifically address added mass, the quantity of water being drug along by the boat. Others vessel performance models often represent added mass in some fashion in their models.

While our model is simplistic it provides great insights into many elements of boat performance.

We hope you find it useful.

Prior Work in This Field

This was truly a bucket list item for me.

A big thanks to all who helped to make this work possible. We hope you find it useful and enlightening.

We encourage your comments below.

If you read all the way down to here, please go back up near the top of the page and download the actual paper.