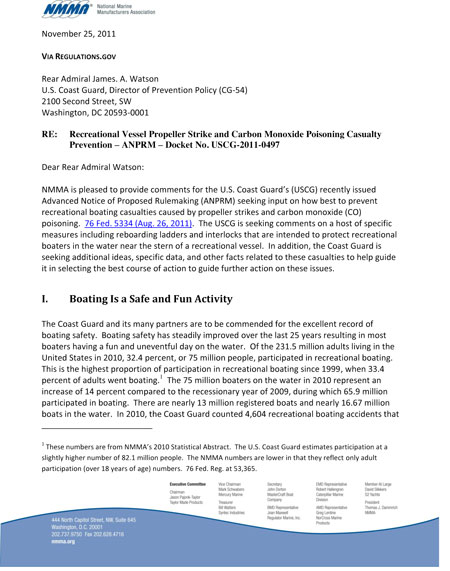 While we may not agree with the six page letter written by Cindy Squires it was very well written. She has a law degree, works from NMMA’s Washington D.C. Office, and now often writes environmental and safety regulatory responses, in place of John McKnight who wrote many previous similar documents. She is NMMA’s Chief Counsel for Public Affairs & Director of Regulatory Affairs.

NMMA’s letter is easy on the eyes, makes good use of open space, uses over sized top and bottom margins, and is arranged into six numbered sections, with section six being the conclusion. Their comments are printed on NMMA’s letterhead with the blue wave at the bottom of page one and NMMA’s logo in the top left. We discuss each numbered section of their letter below.

1. Boating is a Safe and Fun Activity

“The NMMA Boat & Yacht Certification Program helps manufacturers ensure their boats are built to applicable standards set by the ABYC and informs the public of such compliance.”

The Coast Guard has the ability to drive the process by analyzing BARD data and then funding the development of new ABYC standards to meet the needs. Similar language to the BoatUS comments. NMMA call on USCG to follow the National Technology Transfer and Advancement Act (NTTAA) (15 U.S.C. 272 note) which they say directs agencies to use voluntary consensus standards in their regulatory activities unless they are inconsistent with applicable law or impractical.

3. The Coast Guard Must Determine if Accidents or Fatalities Would Improve if any Proposed New Measure is Adopted

BoatUS public made similar comments on this same proposal.

NMMA’s statement on the issue is below.

“Before moving forward on any specific new measure, such as mandating a longer reboarding ladder depth, requiring interlocks or other measures, the USCG must first do a detailed analysis of the Boat Accident Reporting Data to see how many accidents or deaths involve the specific fact pattern being targeted. Only then can the Coast Guard determine which accidents or fatalities may have been avoided had a particular measure been implemented. Once armed with that data, the Coast Guard can determine if a particular measure should be encouraged by supporting the study and development of voluntary consensus standards to address that measure, and then decide whether the number are sufficient to warrant a U.S. Coast Guard mandate that incorporates to the extent possible any voluntary consensus standards.”

So NMMA and the boating industry just set back till USCG notices a problem in their Boating Accident Report Database (BARD), USCG funds NMMA and ABYC to write their own standard, then NMMA and the industry adopt it? If you are a boater would you want NMMA looking after your safety if that is their plan? Plus, by the way, USCG does not identify problems based on them ringing some sort of bell in BARD. Somebody makes a request of USCG and they begin to look into the situation asked about. NMMA and the boating industry have access to BARD. They should use it!

4. The Coast Guard in on the Right Track with the Reboarding Ladder Project by First Focusing on Supporting Critical Data Collection and Standards Development

Per NMMA, ABYC has proposed revisions to ABYC Standard H-41 Reboarding Means, Ladders, Handholds, Rails, and Lifelines. While NMMA does not consider the current H-41 standard to be unsafe for boaters. Did they really watch the ABYC swim ladder video? (it was at http://s289313426.onlinehome.us/ppgmarine.tv/laddertest)

As to how drastic the change is with the longer ladders, below is what CED Technologies had to say about the difference in their 26 October 2009 newsletter. CED Technologies contracts technical services to USCG, has been a major player in development of the propeller guard test protocol, and was onsite for ABYC’s underwater video session of the boarding ladder test. 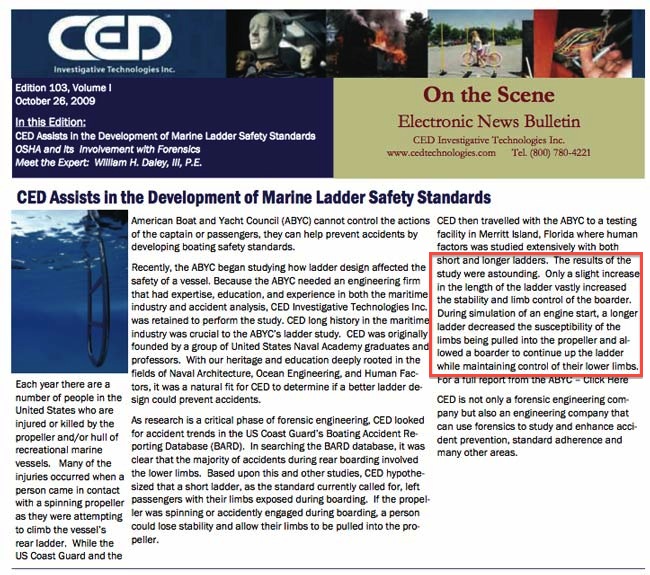 ABYC’s proposed change has not been through the balloting process yet so NMMA opposes making it a rule until it has been properly vetted by ABYC. We saw preliminary footage of ABYC’s underwater ladder video at NBSAC83 in Orlando in April of 2009. Thom Dammrich, NMMA’s president was at that same meeting, he was a manufacturing member of NBSAC. I even had a brief chat with him there.

It was obvious to anybody watching the video that current ladder lengths are a propeller safety problem. NMMA says they surveyed their boat building members and found 24 percent of them are already using reboarding ladders that extend 22 inches of more below the waterline. Now, approaching three years later, NMMA still can’t move forward?

NMMA even said a 2010 survey of their boat building members about lengthening swim ladders found 32 percent supporting, 24 percent opposed, and 44 percent wanted more information. Could they have possibly given their own members the information they requested since then?

We just checked ABYC’s EZ-PTC list of all standards currently under review. The H-41 ladder standard is not on the list. We do see some “Requests for Interpretation” on ABYC’s site concerning the H-41 standard, but none directly focus on swim ladder length. We commend ABYC for their efforts in conducting the testing and making the video available. We suspect part of the delay is because ladder length is only one element of many on the H-41 standard, and the industry is trying to review all the other elements as well. Why not just put out a bulletin and tell boat builders to watch the video and strongly consider using longer ladders if they feel they are appropriate?

5. The Coast Guard’s Consideration of a Requirement for Boarding Ladder or Entrance Gate “Interlocks” on New Recreational Vessels is Premature – Additional Study is Needed

How many new propeller injuries do they need? As mentioned in #4, we saw preliminary footage of the ABYC underwater boarding ladder video in April 2009. Now they need additional study? What have they been doing since then?

Next, NMMA restates several questions USCG asked about interlocks, then reports 96 percent of NMMA’s survey respondents do not use interlocks.

NMMA reports they are unaware of any industry standards that addresses the installation of recreational boat interlocks.

“NMMA is unaware of any voluntary industry standard that addresses the installation of recreational boat interlocks.”

NMMA, can’t figure out how to install them without any industry standards. We guess their boat builders will have to start leaving off most of their throttle control lever assemblies tomorrow, because they include a recreational boat safety interlock forcing the boat to be in neutral before starting. The industry must not know if they should use them or not or how to install them per NMMA’s comments.

We even see NMMA’s own Boat and Yacht Builder Certification program they were bragging about earlier in their letter requires boats with Manual Propulsion Control Systems to meet ABYC P-14-08. ABYC standards for side mount lever controls require a neutral interlock position to prevent accidental shifting. So NMMA’s own boat and yacht certification program requires the use of safety interlocks..

Below is a 1976 Brunswick patent (that cites an even earlier OMC patent) for an outboard motor neutral starting interlock. These interlocks have been around for at least three decades. Has the industry been using them so long they forgot about them? 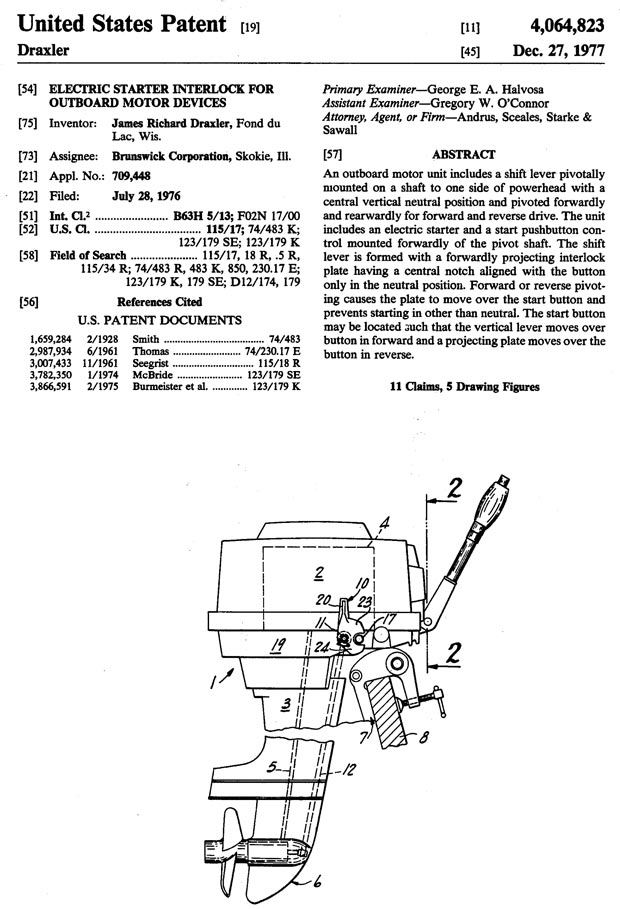 Way back in March of 1979 USCG’s National Boating Safety Advisory Council was investigating the use of engine kill switches / cut-off switches to prevent boater fatalities. A presentation of 1975 and 1977 boater fatality data was made. While they were trying to decide how many lives could be saved with lanyard kill switches, they subtracted 30 lives (15 fatalities per year) identified as “clearly preventable by a recent equipment development with prevents starting in gear.” So back in 1979, they claimed these safety interlock saved 15 people a year. The first page of the NBSAC presentation is marked below. 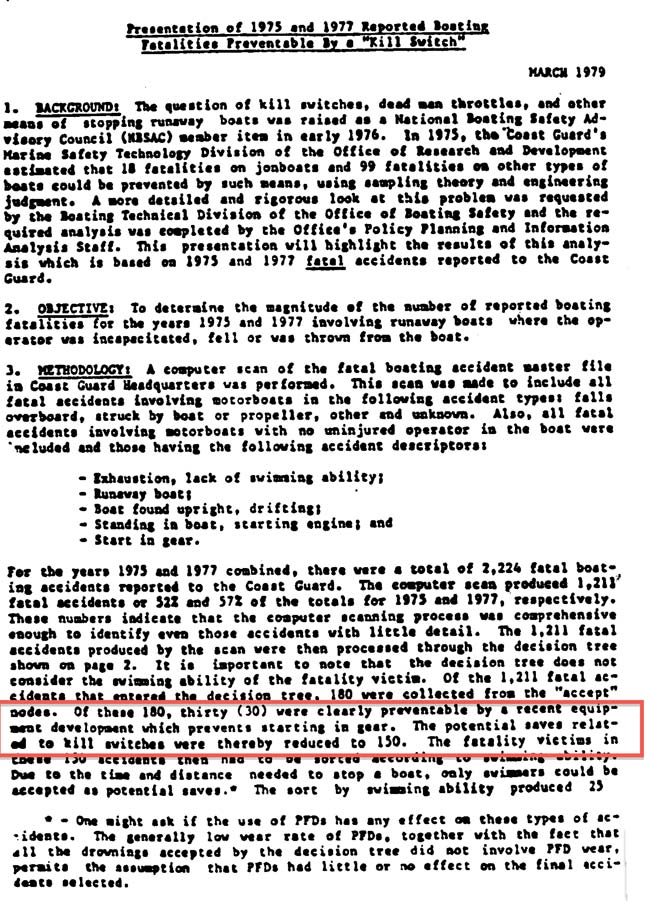 The Coast Guard / NBSAC removed these 30 people that could have been saved if neutral start interlocks had been in place from the calculations of those that might be saved in the future by the use of lanyard kill switches.

Although Brunswick does not use the word “interlock” in a recent patent, U.S. Patent 8,043,132 assigned to Brunswick Corporation on October 25, 2011 for a “Method of Operating a Propulsion System of a Watercraft, it is clearly a safety interlock. The system prevents a hybrid powered boat from leaving the dock if the charging lines are still connected.

“A hybrid marine vessel is provided with a system that inhibits the movement of the marine vessel under its own power when the marine vessel is connected or recharging to a stationary source of energy on shore. This avoids significant damage that could otherwise occur if the marine vessel moves away or attempts to move away from the dock when connected by a cable or other device to a stationary structure. The system detects a potential connection between the boat and a stationary shore component, such as a source of energy, and inhibits the transmission from being placed in a forward or reverse gear position under those conditions. Similarly, if the boat is already in a forward or reverse gear position, the system inhibits its being placed into a battery recharging mode.”

The Brunswick patent goes on to describe several possible safety interlocks, using a number of sensors to tell a microprocessor if the charging lines are plugged in or not. The systems are far more complicated than the simple magnetic switch used by MariTech’s swim ladder interlock. According to NMMA’s public comments, Brunswick should have no idea how to do this since there are no interlock standards. We suspect that will not slow Brunswick down because they are on the other side of the fence this time.

NMMA proposes USCG work with ABYC to develop a test or research plan to develop the data USCG is interested in that may shed light on why they interlocks have not been more widely adopted.

NMMA welcomes the opportunity to work with USCG on the rulemaking project. One more similarity with BoatUS’s public comments

Boating Industry representatives and NMMA’s comments are often “education”, “it needs more study”, or “we need more time”, when in fact what they are saying is “Not On My Watch”. Those in power only have to keep the dogs at bay till their watch is over, and they have been very successful at it for a long time.

We wordled NMMA’s comments to visually display their letter. The more times a word or phrase is mentioned in the letter, the larger it appears.

We have a much larger version of this wordle of NMMA’s comments in the wordle category of PropellerSafety.com. You can see the smaller words and phrases much better there. We thought the wordle was a bit symbolic the way the bulk of NMMA’s comments are supported by the vertical word, “standards”. Lack of standards was one of NMMA’s primary defenses against the proposed rule.

The wordle also provides displays NMMA’s view of the relative importance of regulations and standards. “Regulations” is the very small light blue word in the extreme top left of the wordle that we can’t even read in this view, while “standards” is the pillar of their comments.

We always welcome comments, but we especially invite NMMA to comment if we somehow misread or misunderstood any of their statements.