At the close of our coverage, we presented a wordle of NMMA’s comments.

This post presents a much larger version of that wordle.

The larger the size of the word or phrase, the more times it was mentioned by NMMA in their message.

As we mentioned earlier, we found it interesting the wordle is somewhat supported on “Standards” which was one of NMMA’s major objects toward moving forward on anything (no standards for interlocks, ABYC is not done with the ladder standard, USCG should be funding the boating industry to develop standards, then USCG should adopt them.

We thought you might find it interesting to compare a wordle of NMMA’s comments to a wordle of our comments.

Our public comments were presented on PGIC Public Comments on USCG-2011-0497. A wordle of our comments is below. If you click on it, you will see an even larger version. 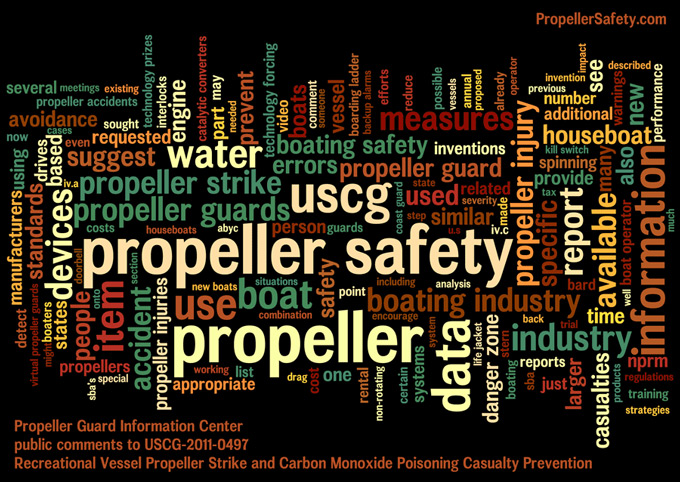 You can easily see we emphasized propeller safety, propeller, propeller strike, propeller guards, and similar words. We tried to promote an environment friendly to nurturing and accepting new technologies and strategies that continuously lead to even better solutions vs. NMMA’s emphasis up on standards which tend to squash innovation. In comparison, NMMA talked about themselves, ABYC, standards, the Coast Guard and reboarding ladders.