We just encountered this claim again in a July 2012 BoatUS Seaworthy magazine article titled, The Coast Guard’s Search for a Protocol to Test Prop Guards. In the article, Bob MacNeill, himself a propeller strike victim and past President of Chris-Craft and Carver Yachts states:

“While the idea of reducing propeller accidents is certainly appealing, none of the boat manufacturers, including Chris-Craft and Carver, has ever offered the devices. Nor has West Marine.”

That claim is not true. We identify a few of the many boat manufacturers that have offered or are now offering propeller guards in three recent posts.

In light of the information presented in the three posts above, we suggest the boating industry refrain from continuing to use their “nobody every sold them with a guard” statement or be prepared to put several asterisks after it.

In addition, Mr. MacNeill said West Marine never sold one. I just went to West Marine’s web site, typed in propeller guard and was directed to the Mac’s Prop Savers Prop Guard shown below. Mr. MacNeill was wrong on all counts. 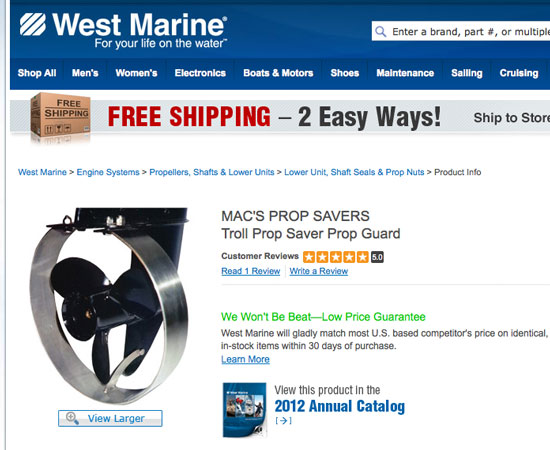