A March 28, 2012 Yamaha Motor UK press release from their new Pro division showcases recent deliveries of flood rescue boats to Lincolnshire Fire & Rescue. Yamaha’s new Pro division specializes in products for professional users, emergency crews, and the military. (As noted at the end of this post, Yamaha has since removed all online references to the existence of this propeller guard. The press release referred to above was at (previously at XXXXm.yamaha-motor.eu/uk/news/494770XXXX remove the X’s). 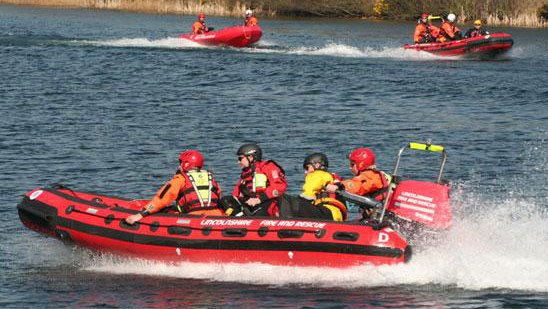 Unlike the earlier Yamaha UK Pro announcement in which the propeller guards were credited with increased performance, improved handling, and protecting the propeller, this time Yamaha Motor UK’s own press release clearly states the guards are used to protect people in the water:

“When operating in a flooded environment there is also the possibility of casualties in the water, which means a propeller guard is essential to reduce the risk of injury.” 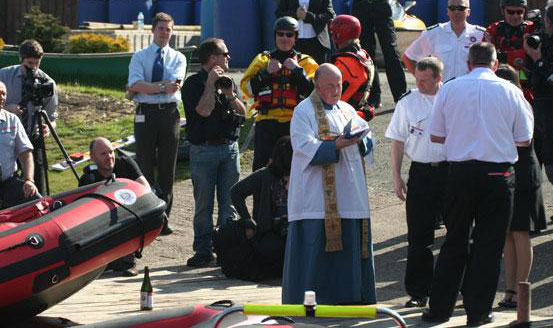 We also thought it was nice to see Lincolnshire Fire & Rescue take the opportunity to have a local clergyman (Fire & Rescue Rector, Father Terry Steele) bless the new rescue boats. Knowing that these boats will be involved in many life and death situations, we thought that was a particularly nice thing to do. Plus it provided a nice photo op for their new boats, provided the communities that had looked forward to them for a long time an opportunity to celebrate their delivery, and a chance to thank the agency providing funds that helped make the new boats possible. The Department for Environmental, Food and Rural Affairs supplied a 250,000 British pound grant to help fund the purchase of the boats, training, and maintenance.

As we understand it, there are ten new boats divided among three types (4 and 5 meter RIBs, and solid Whaly boats). Sixty personnel have been trained to operate the boats which will be scattered across Lincolnshire.

May the rescue boats blessed by Father Steele, bless the lives of the people of Lincolnshire.

Other Yamaha Quotes About Propeller Guards

Later the same day, we discovered a new Yamaha Motor UK colorful online four page flyer describing Yamaha’s 25 HP and 40 HP two-stroke outboards designed for commercial operations and flood rescue teams. Some of the photos include the new boats at Lincolnshire Fire and Rescue. The flyer talks about Yamaha’s new propeller guards and includes a quote similar to the one in the March 2012 Press Release above:

“When operating in flooded environments the likelihood of swimmers/diver/casualties being in the water means that a prop guard is essential.”

The flyer goes on to note that Yamaha propeller guards are specifically designed to have minimum impact on performance.

Update – All References to Yamaha Propeller Guards Have Been Erased

By November 8, 2012 Yamaha removed all references to and comments about its new stainless steel propeller guards. See our Yamaha Removed All References to its New Propeller Guard From its Website post.

SPIN brought the Yamaha guard to the attention of the U.S. Coast Guard’s National Boating Safety Advisory Council (NBSAC) at the November 8, 2012 meeting in Watsonville California (see portion of the official minutes below):

“In March of 2012, Yamaha UK tested and offered a “guard”. As in previous guards from the 70’s to the Handler of the 90’s – now deposited in some archives but not in the marketplace. This Yamaha guard (probably from Propeller Solutions) promotes the enhancements of maneuverability and power. The guard “protects the propeller from foreign objects” – I guess like humans. But it even reads “when operating in a flooded environment there is also the possibility of casualties in the water, which means a propeller guard is essential to reduce the risk of injury.” There it is; do we need more definite language?”

But alas, Yamaha had deleted all online references to the guard just before the meeting.