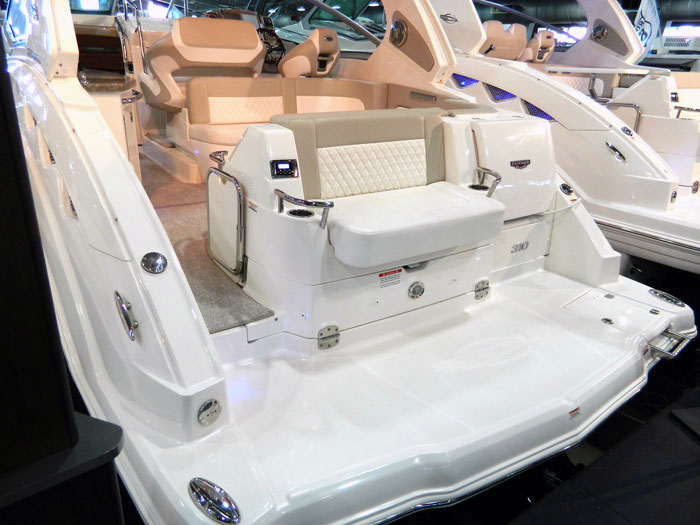 The extreme popularity of this design can lead to some problems. Most of the boats with swim deck seats have a warning label telling you not to sit in them when underway, but we suspect those warnings are often ignored.

For example, pontoon boats have warnings telling you not to sit on the bow, but every year several children and a few adults sit up there dangling their feet in the water, fall in, and are struck by the propeller.

Other warnings tell you to make sure you have a spotter at the stern before reversing a houseboat due to poor aft visibility. These warnings are also often ignored, especially by rental boat operators, and people in the water are struck by the propeller.

We did not notice life jackets / PFDs on any of the adult models in these seats in photos of the boats online or in the brochures we examined.

If a boat without swim platform seating had given probability of being involved in a propeller accident during its useful life, if that same boat was redesigned to convert the forward facing rear seat to a rearward swim platform facing seat with walk through access to the main passenger area of the boat it seems obvious to us that the probability of that boat being involved in a propeller accident has been increased.

However, that balance may well have been destroyed by the relatively swift change to rearward facing swim platform seating. We see absolutely no test data on the safety of this new design in normal operation (are people falling out of them in use or not), yet the industry is rapidly embracing this higher risk design.

We noticed several manufacturers adding amenities back there: stereo speakers, cup holders, elbow wrests, a pivoting tv dinner tray, and even a barbeque (BBQ) cooker. even without those amenities, the seats already almost scream, ride back here, this is lots of fun, a great view, easier to interact with other boaters and those being towed, and a little water splash/mist now and then.

Even without the amenities the seats could be called an “attractive nuisance”. The law states that a person who owns property on which there is a dangerous thing or condition that will foreseeably lure children to trespass has a duty to protect those children from the danger. For instance, if you lived near an elementary school and had a swimming pool in your unfenced backyard that was visible to children as they walked by on the sidewalk, your pool might be determined to be an “attractive nuisance”. We all know some children are going to be attracted to walk over to the pool at which time it creates a drowning hazard. I went to a very small high school where a neighbor to the school built a pool in a fenced backyard. Even fenced in, it created some issues.

Yes, we understand the legal meaning of attractive nuisance does not apply to these seats because no one is trespassing, however, the concept applies. Rearward facing, swim platform seats attract people like magnet. Their rapid adoption by the industry proves their popularity and desirability.

The U.S. Coast Guard (USCG) has been trying to get boaters to wear life jackets for decades. USCG has spent millions of dollars on promoting the wearing of life jackets, yet adult wear rates on open motor boats are still only about 5 percent. Does anybody really think that little decal affixed under the seat instructing passengers not to ride on the rearward facing swim platform seats when underway is going to be effective?

We do have one accident report, Deondra Scott and some others entered the water from a rented Chaparral Sunesta at the Lake Normal Lake Bash in 2011. They thought the boat had stopped, but the novice operator was still maneuvering the boat. Deondra Scott was very seriously struck by its propeller. Several people were on the boat adding to aft visibility issues.

If anybody out there is aware of other man overboard or propeller accidents involving swim platform seats, please send them to us via the “Contact Us” tab in the top menu, or directly post them in the comments at the end of this post.

We strongly encourage the boating industry to put additional accident mitigation techniques in place on these vessels. Propeller guards are not the only way to mitigate propeller accidents. Our post on Developing a Consumer Guide for the Selection of Propeller Guards and Other Propeller Safety Devices identifies several other devices, and approaches including boating safety classes and altering behaviors.

Some approaches that quickly come to mind are Keith Jackson’s (MariTech) swim gate switch (prevents starting if the swim gate is open) and seat presence sensors (like the weight sensors that detect you sitting on your riding lawn mower and stop it when you stand).

Swim platform seating just yells fun. When used safely they provide a new way to interact with the water, those in the water, those on shore, and other boaters. Its easy to imagine setting back there listening to music, relaxing with a cold drink, having a snack, chatting with your friends, and maybe even fishing.

The boating industry has been struggling with national economy problems the last several years. These models provide a fresh look, and generate sales even in today’s tough economy.

We are not saying they should be banned. We are just saying studies should be done and steps should be taken to insure they are safe. Not only the newly build vessels, but those placed in service in recent years as well.

For example, pontoon boats have rails around their perimeter, no such rail is present on these vessels at the swim platform seats.

In addition, boat manufacturers and third party suppliers will continue to create new accessories for use in the swim platform seat environment that will push the limits further. Its past time to recognize the hazards and begin to make sure things are safe back there.

Some quick ways of estimating how many people are riding in the seats when the boats are underway and how frequently that occurs are:

As mentioned earlier, swim platform seating was everywhere at the 2013 Tulsa Boat Show. We took several photos, but these examples are only the tip of the iceberg in terms of the number of boats present with swim platform / swim deck facing seating. 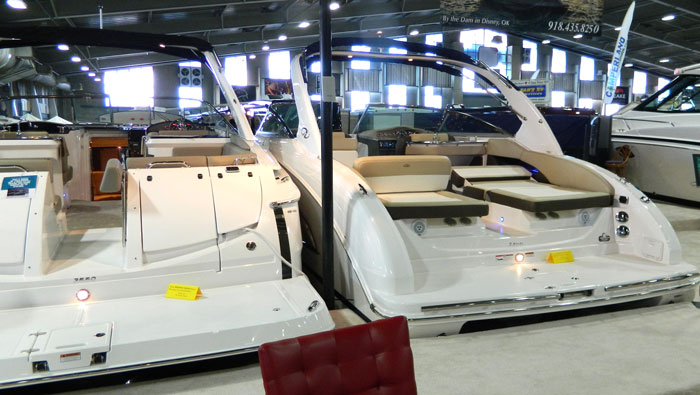 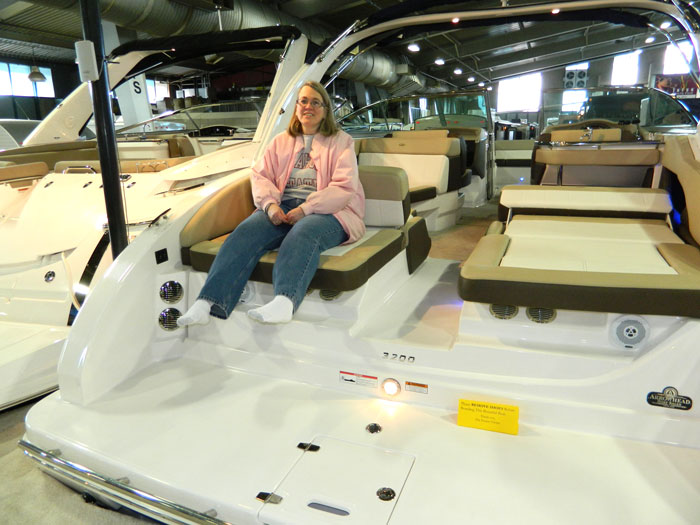 Lora on one of the Regal swim platform seats.

Arrowhead was very nice about showing us around and answering our questions. If anybody in Oklahoma, Kansas, Arkansas, Missouri, Texas area is interested in a Regal or other premium brand boat, we suggest you visit with them at one of their multiple locations. 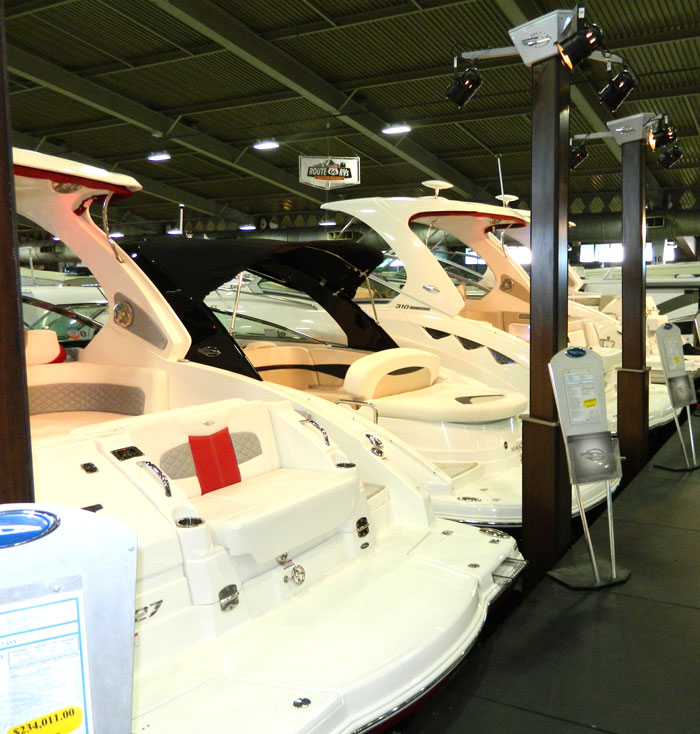 Chaparral brought a large fleet of rear facing swim platform vessels and was very nice to us as well. 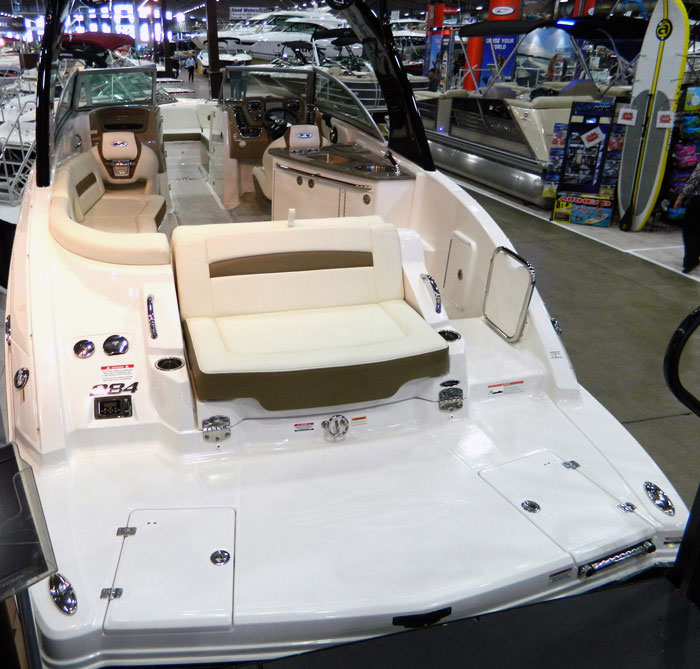 The Chaparral Sunesta was the model involved in the Deondra Scott rental boat propeller accident. The swim gate is easily visible in this photo.

The Chaparral 310 Signature Cruiser is a very nice boat with swim platform seating. This seat, like many of the others is adjustable into multiple configurations including going flat for a sun pad / sun bed. Note the don’t sit here when underway warning is under the seat and would be hard to view by those on the boat. The swim gate is easily visible in this view as well.

We visited with the gentleman showing the larger Chaparrals. We talked about how popular rear facing seating has become. Chaparral was among the first to introduce it few years ago, now many others have followed suit due to its popularity. 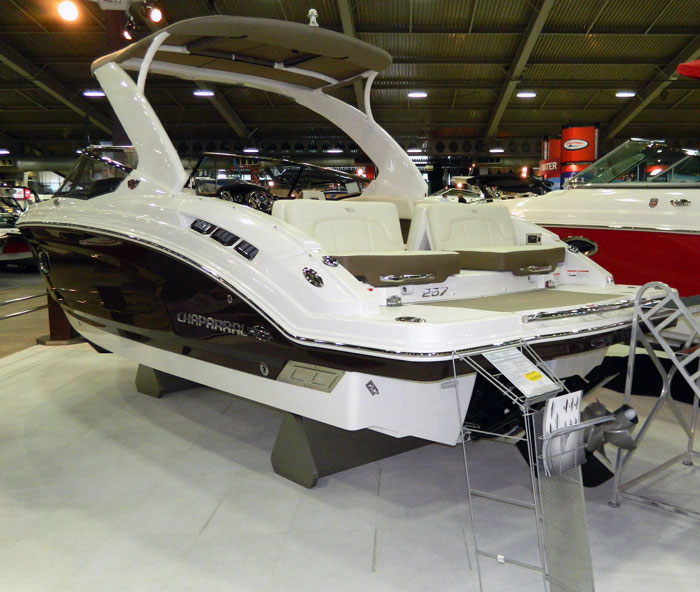 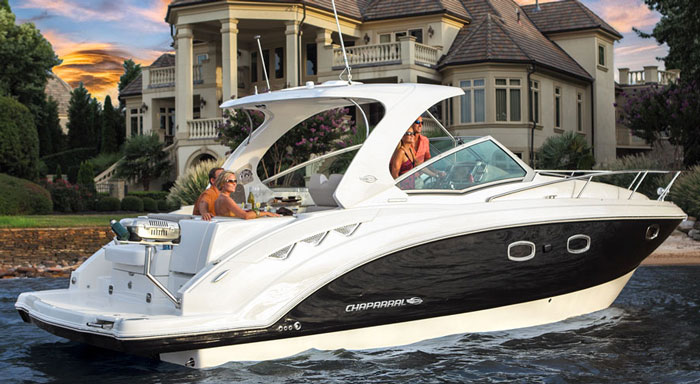 Chaparral boat with swim platform bbq from their 2013 web site

This shot from the 2013 Chaparral Sport Boat Catalog shows a barbeque (bbq) attachment being used in the swim platform seating area. The easy to connect “socket” allows multiple Chaparral and third party accessories to be quickly installed. 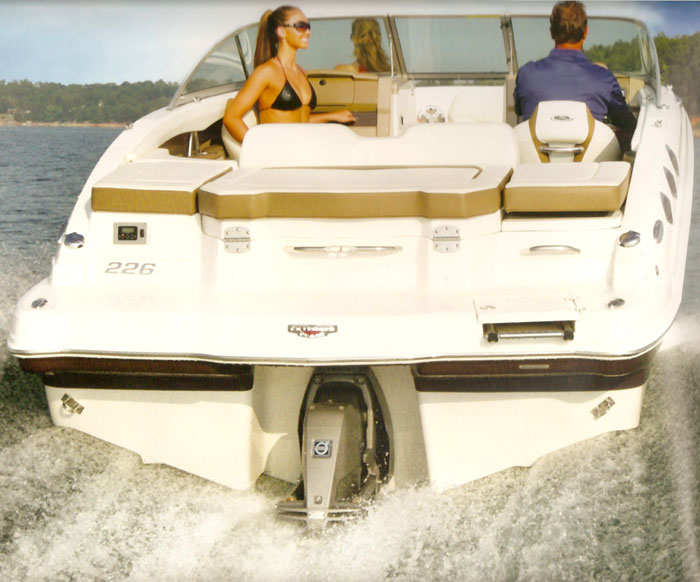 A photo in Chaparral’s 2013 Sport Boat Catalog shows how close those riding in the swim platform seats are to the propeller(s). 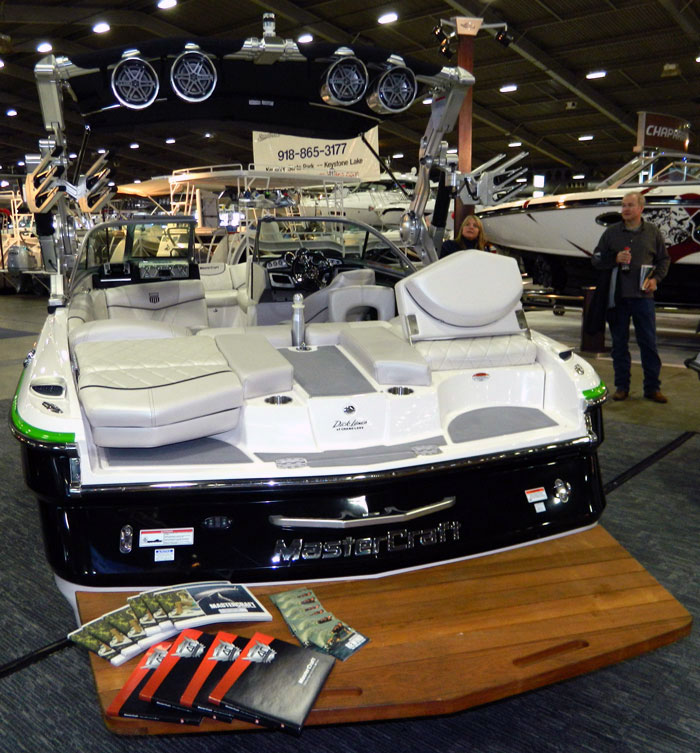 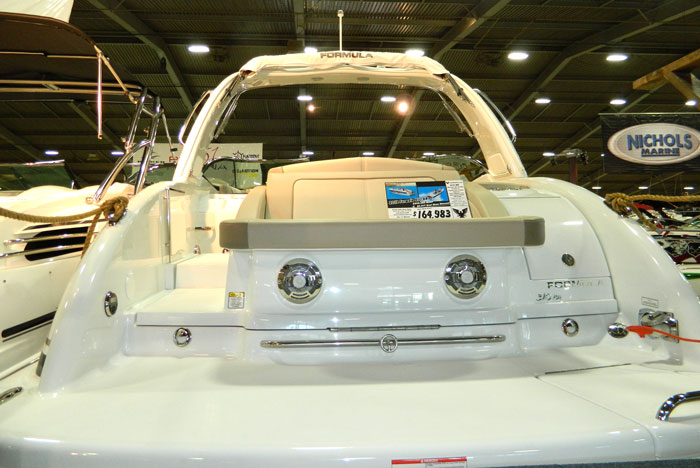 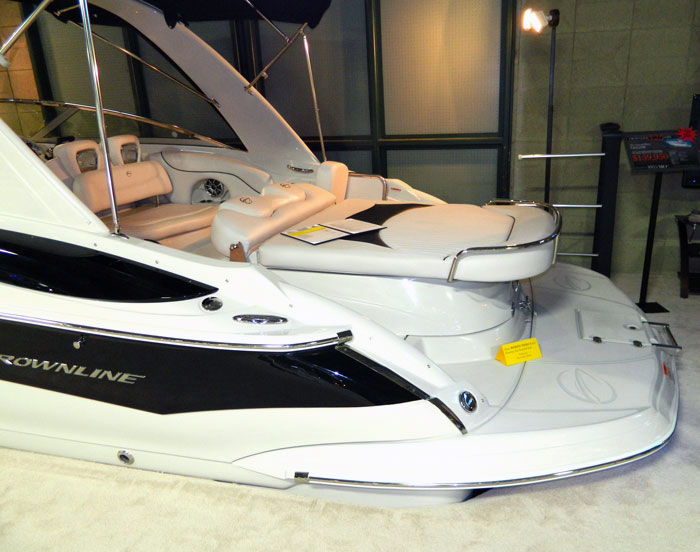 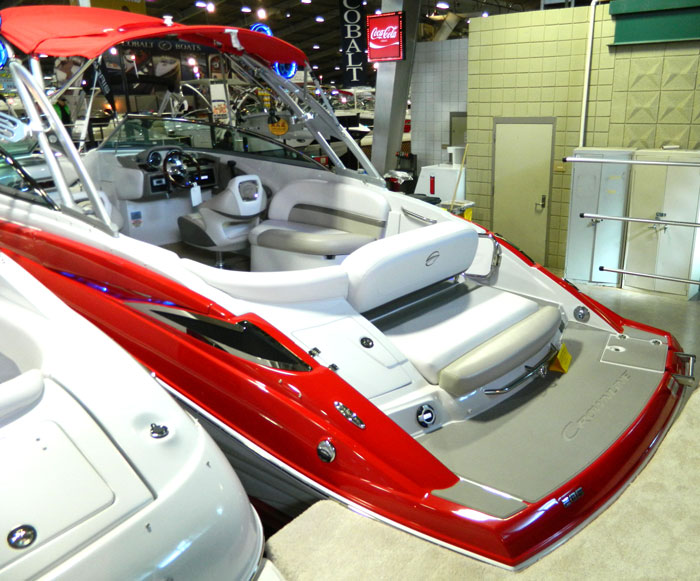 The previous sun pad / sun bed, folds up into swim platform seating as seen on this Crownline boat. 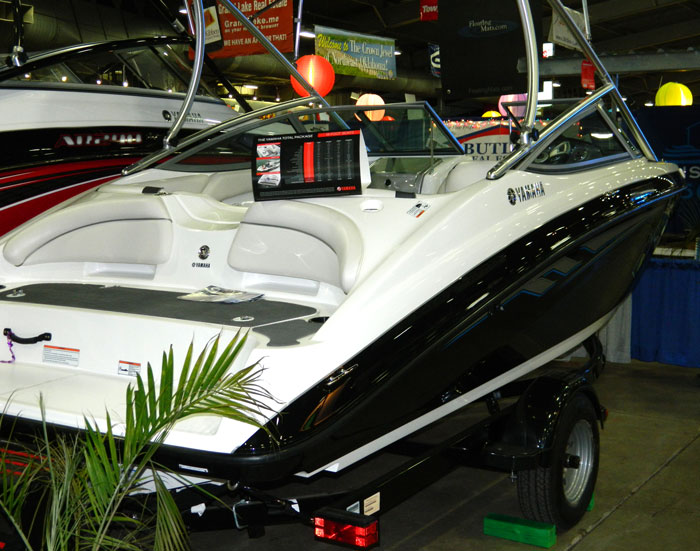 We commend Yamaha for offering an extensive line of jet boats as alternatives to propeller driven boats. 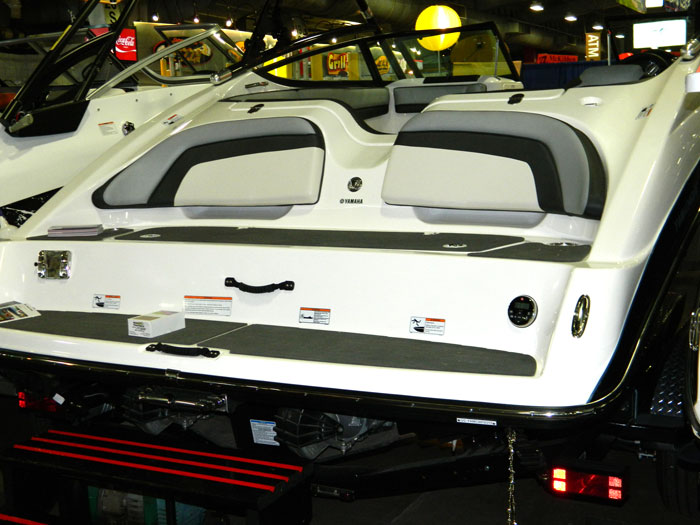 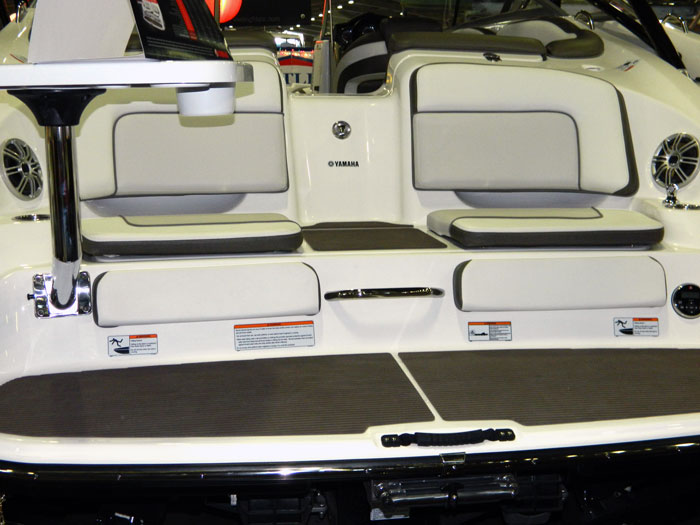 Some of the Yamaha jet boats had a socket at the rear to accept various accessories. This one accepts a swivel mounted serving tray that includes a cup holder. You can see it better in the next photo. 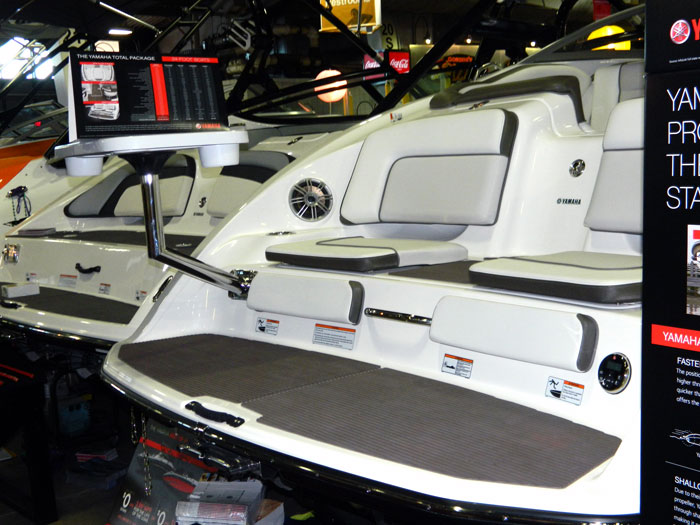 I tried to explain how this accessory was mounted to Lora. She was not understanding, so I pulled the pin at the flange in an effort to show her how the flat flange slipped up and down in the retaining socket slot. The accessory is a little heavy and awkward due it its shape. It quickly jumped out of its socket and I was embarrassingly wildly waving it around trying to gain control of it when a salesman can over to save the day. He told us the trays were very popular. I think he may have told us they have a flange mount barbeque (bbq) too.

The boat had receptacles for these slide in accessories on both sides of the boat so two folks could each have their own tray. It looks like a great accessory and lot of fun. However, it makes it even more attractive to ride back there when the boat is underway.

We noticed some aftermarket manufacturers providing replacement seats for these models. One of them is bringing out an armrest, which further adds to the fun of riding back there.

We previously showed some of the don’t sit here when underway warnings on our Propeller Warnings Seen at the 2013 Tulsa Boat Show page. A few of the seat warnings are reproduced below. 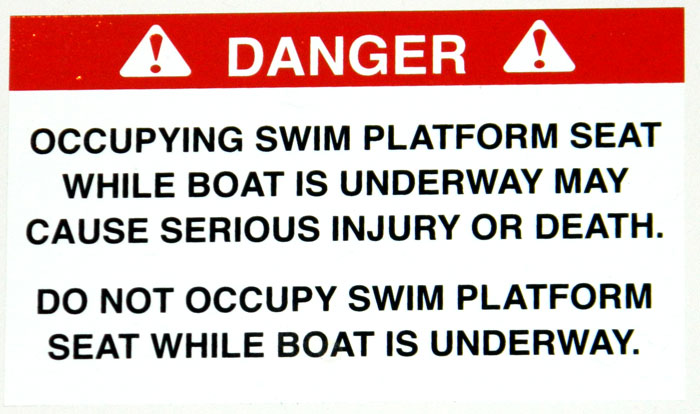 One manufacturer elects to use a Danger warning. The label has many problems with the ANSI Z535.4 standard, some of which we identify in our discussion of propeller warnings at the 2013 Tulsa Boat Show. 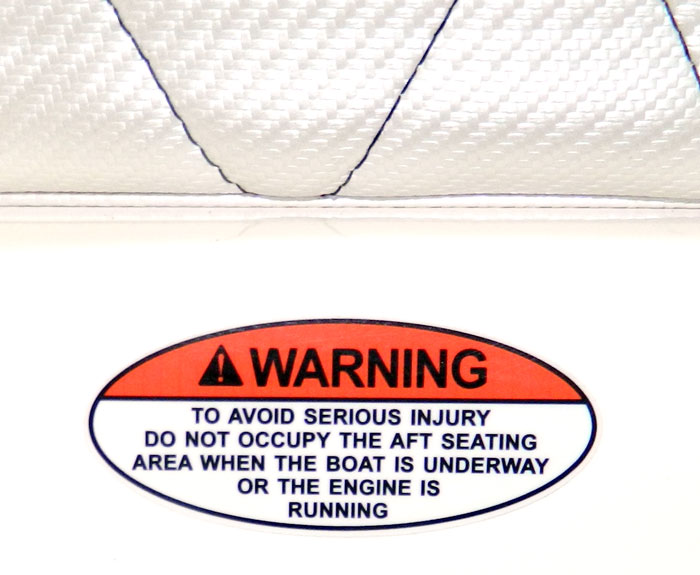 This manufacturer elected to use “Warning” as their signal word and to place it on an elliptical warning label.

As elsewhere discussed, not only do these warnings need to be in compliance with the design portion or ANSI Z535.4, they should be placed where they can be read. We noticed several manufacturers placing them under the seat where it would be difficult to view them from the boat.