U.S. Coast Guard’s Boating Accident Report Database (BARD) remains the primary source for those trying to identify individual recreational boating accidents of a certain type in the United States. It is compiled from accident reports sent to USCG by the individual states and territories.

The Coast Guard’s Annual Boating Statistics report does a nice job of summarizing annual BARD data and providing statistics for the types of accidents the Coast Guard has individual classifications / categories for as seen in our discussion of their 2012 report. You can see many types of accidents are classified in this annual report including capsizing, collision with fixed object, collision with floating object, collision with submerged object, ejected from vessel, falls overboard, grounding, person struck by boat, and person struck by propeller.

As noted several times earlier on this site, the uninitiated may be confused by the presentation of the data (accidents listed as a series of three events) in the annual boating statistics report, but the information is there if you know how to interpret it.

However, those seeking similar statistical information for types of accidents not specifically classified by BARD and reported in USCG’s annual boating statistics report, are left to using BARD and building their own counts, as are those seeking detailed information on individual accidents of a certain type.

For example, we used BARD and other tools to develop lists of several types of accidents not specifically classified by BARD including:

Researchers, Safety Experts, Manufacturers, Safety Advocates, Legal Cases, Regulators, and others use BARD to identify specific accidents of types not classified by BARD to:

Problems Encountered When Trying to Identify Similar Accidents in BARD

While using BARD requires a lot of patience, some database software skills, and acknowledging severe under reporting (not all accidents that should be reported are reported), it remains the only game in town.

BARD underwent a major change in format beginning with the data for 1995. Plus data since 1995 is available in a much easier to interpret format. Earlier data was generally entered as codes into data fields requiring you to lookup or memorize countless codes to interpret a single accident record.

So what is the problem?

While this is wonderful, it leaves us without access to “Accident Narratives” or “Redacted Narratives” for accidents from 1995 through 2007.

Our own efforts have turned to news media reports, boating forum discussions, reports made directly to us, legal records, and other sources to try to fill in the earlier data. We turn to the same sources to identify accidents that may not have been reported to USCG or accidents that were reported to USCG but did not identify the exact type of accident we are looking for in their “Redacted Narrative”. Once we are able to identify an accident in the media or other non-BARD sources, we are sometimes able to use the date, geographical location, and other details to identify the accident in BARD. This is extremely time consuming vs. being able to directly search BARD redacted narratives.

Researchers face several more problems in addition to not having access to “Redacted Narratives” prior to 2008. Among them are:

Researchers Can Only See the Tip of the Iceberg

To better illustrate this issue we created an iceberg graphic that illustrates researchers are only able to search the very tip of the iceberg when trying to identify similar accidents that are not of type specifically classified used by BARD. Click on the chart to view a much larger pdf version. 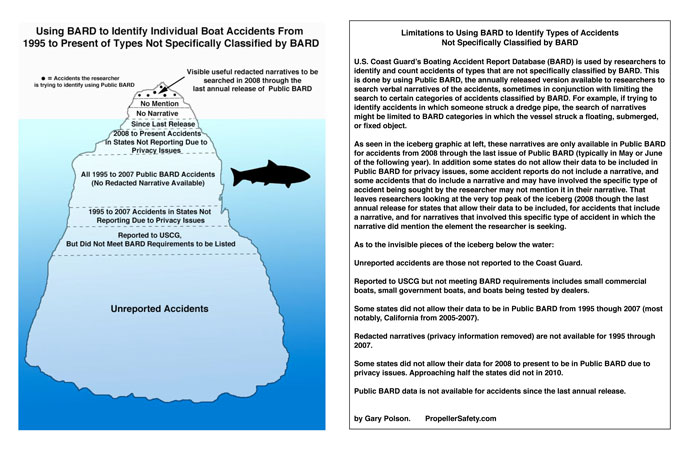 These shortcomings significantly limit the ability of those trying to reduce the frequency of specific types of accidents that do not fall into existing categories of accidents reported by BARD.

The shortcomings also preclude the ability of researchers to make an estimate of how many accidents of this type may be included in BARD but not visible to the researcher.

We will be addressing this issue further, in future posts.