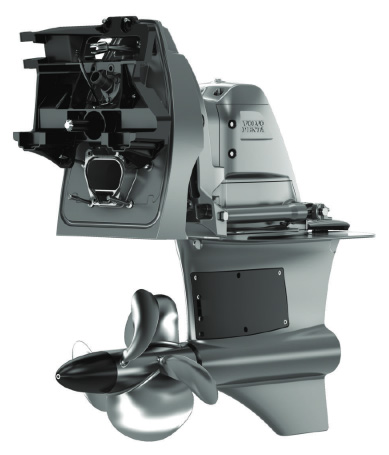 Volvo Penta unveiled their new FWD Forward drive at the Miami Boat Show on 11 February 2015. It is a companion to their successful IPS forward facing diesel twin prop through hull drive (similar to the Brunswick / Mercury Marine Zeus drive).

The new FWD drive bolts to the transom like a stern drive, but has twin forward facing propellers. Targeting towed sports, especially wake boarding and wake surfing, the drive features a wide range of trim that allows it to change the wake by changing the attitude of the boat. Currently that is done by large onboard water tanks pumping water in and out of an inboard powered boat to make the boat sit down in the water and make a larger wake.

Volvo Penta says the drive reduces noise and vibration, reduces onboard emission (exhaust pumped out through the propeller), and the forward facing props make the boat more suitable for swimming and fishing off the back of the boat.

Volvo calls it forward facing inboard propulsion. While most of the official Volvo Penta documents back off saying anything about propeller safety compared to stern drives or inboards they do say, “When at rest with the drive trimmed down, the forward-facing propellers are inboard of the boat making activities like fishing and swimming more practical astern of the boat.”

Other statements note the propellers are two feet further forward than they are on a normal stern drive.

While moving the propellers further away from the stern of a tow boat is generally a good idea, putting them that close up under the stern may not be.

We note that many propeller accidents include some sort of entrapment in the open propeller, and several of them involve twin prop installations. People get their limbs, body, hair, clothing caught in and wrapped up in the propeller. When that happens on a traditional stern drive or outboard motor, rescuers have some chance of holding them up high enough they can breathe till they are extricated from the propeller(s) which can take over an hour.

Volvo Penta should be well aware of the entrapment problem with twin props as Volvo Penta is currently involved in a $30 million lawsuit surrounding a young girl being entrapped by a DuoProp off Virginia Beach. It was said to have taken about 90 minutes to free her from the propellers.

With the Volvo Penta FWD propellers up under the stern they are further from people at the stern, but could still encounter riders when they are picking them up or if the operator is reversing the boat close to swimmers. If someone becomes entrapped on these propellers it will be difficult for rescuers to get air to them until they can be extricated.

Volvo Penta’s diesel IPS drives are used on larger boats in open water, not close to beaches and towing people like the new FWD application.

Wake Surfing – riding a board behind the boat without using a rope. Traditionally wake surfers are told to never do this behind an outboard or stern drive powered boat. It sounds like Volvo Penta thinks its okay to wake surf behind the FWD drive. That sounds scarey to us (riding a board right behind a boat and falling forward or the boat suddenly decelerating can put you in the proximity of the propellers pretty fast). As we understand it, the props on the Volvo Penta FWD would be less protected by the boat and by the leading edge of the drive (they can run into stuff in open water). The hardware of the drive will definitely be closer to the boater. As to wake surfers, there is a lot of difference between falling onto the water and falling onto the metal parts of the FWD drive. In addition, wake surfers falling onto the drive might become entrapped in it (get their limbs, clothing or hair rapped up in it somehow) which besides dragging them along, may lead to them being struck by or entrapped by the propeller.

Initially, one would think the new drive would reduce the risk of stepping on or falling on the propeller when re-entering the boat, however this has yet to be evaluated.

Additionally, this quick review does not discuss any possible changes in propeller injury risks encountered in “going around again” to pickup a fallen skier, boarder, or surfer. Many towed sports participants are struck while the boat operator is going back to retrieve them. The propeller being up under the boat may have some impact (good or bad) on these risks.

As to falling onto the drive while wake surfing, our understanding is the drive will often be trimmed up (to cause the stern to squat and make a bigger wake). Trimming the drive up puts it closer to surfers. A swim platform / swim step can help buy some distance and act as a physical barrier (guard) in some instances. Not that you want to fall onto a swim platform either.

From a distance, the FWD looks like a stern drive. If others see you wake surfing behind what they think is a stern drive, they will be trying it too.

Plus nobody mentioned hot exhaust (exhaust air and cooling water) coming out the back much less mixed in with cool water than it is on traditional stern drives and outboards. You might be able to fall back there and get burned, especially if the drive is trimmed up.

If the drive is trimmed up pretty high, is their some possibility of the exhaust coming up fast enough the wake surfers or wake boarders would be breathing it? Perhaps a bigger chance for wake boarders as they would be a little further back? However, they would have been exposed to some inboard exhaust before anyway? The September 2003 USCG/ABYC Carbon Monoxide Safe Distance Study may provide some insights.

At this moment we are not saying the FWD drive is a good or bad idea from a propeller safety point. It provides many useability features and does move the prop forward of the stern. The industry awarded it one of the BWI Innovation Awards at the Miami International Boat Show. We just find it a little interesting that when propeller safety advocates promote some sort of change the industry says they cannot move forward till the Coast Guard studies it forever and especially makes sure there are no hidden / unintended consequences of the new approach. But when the industry gets a new idea they just implement it and move forward.

We do suggest it would be a good idea for Volvo Penta to simulate an entrapment and see if there is any way rescuers might be able to quickly get air to the victim and make that known to boat owners and safety professionals. Otherwise, when it happens (and it will) rescuers will be left on their own to improvise and will have little time to do so. 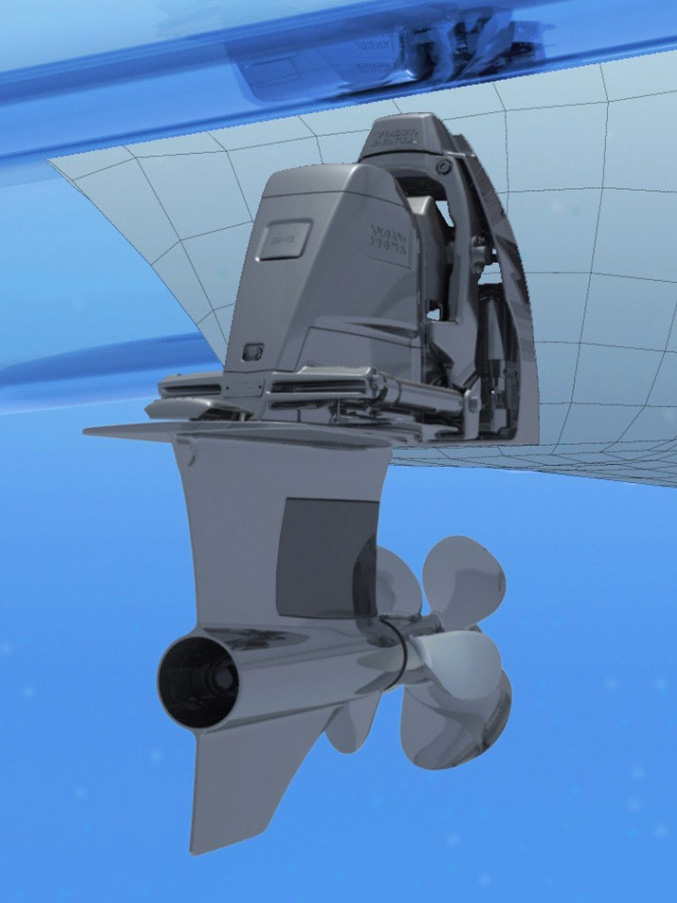 This is NOT meant to be an attack on Volvo Penta. We appreciate their continued efforts at innovation and willingness to try new things. We also recognize the new FWD drive brings some really nice new things to towed sports. We are just wondering if some of our concerns have been considered and thought out. We also recognize some of these concerns are not the type of things you are going to address in your initial marketing pieces.

We welcome comments from Volvo Penta and others on the issues raised above.

12 May 2015 Update – the May 2015 issue of Boating (magazine) includes a full page color Volvo Penta advertisement for the Forward Drive on page 15. The headline reads, “Looking Forward to Summer”. The add features a pretty girl wakesurfing along a large wake (presumed to be from a boat, but no boat or drive are in the photo as the photo provides the appearance it was taken from the boat). The advertisement goes on to mention the Forward Drive produces great wakes without giving up the comfort and performance of pleasure craft.

The pretty girl (wearing a life vest/PFD) is the same girl used in the video and stills used to introduce the drive at Miami in 2015.

This ad perpetuates our concerns mentioned earlier and in the comments section below that some wake surfers may get the idea it is safe to wakesurf behind any Forward Drive (including those on boats without swim platforms).