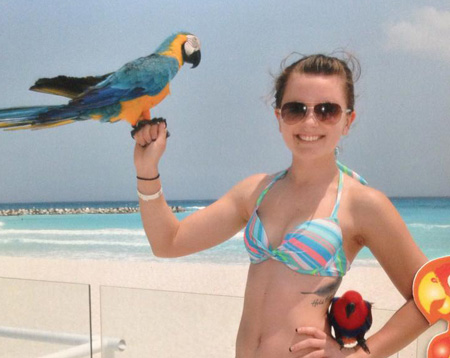 Andrea Mary Jacura, 22, was swimming in Shuswap Lake in southern British Columbia Canada on Friday 10 July, 2015. A popular houseboating lake, this young woman from Edmonton, Alberta Canada was near an area known as Neilson Beach at the Cinnemousun Narrows north of Sicamous. She was swimming behind a houseboat, the houseboat was reversed, and she was fatally struck by the propeller.

Eleven people were on the houseboat at the time of the accident, several of them were her family members. The houseboat operator was not aware she was back there when they backed the houseboat over her. Rescuers were dispatched about 2:45pm, including life flight, but she was dead at the scene.

While details are sketchy, it sounds like she may have jumped in while the boat was being beached, the boat operator reversed the boat during that process, and she was killed by the propeller. News reports do not specifically identify the houseboat as a rental, but Shuswap is known as a major rental houseboat vacation destination.

The Edmonton Journal reports Andrea Jacura worked summers for a landscaping company as part of group of young women mowing lawns. She recently found a job in Australia and was preparing to move. FaceBook reports she also works for Boston Pizza in Edmonton.

18 July 2015 – todays InfoNews.ca Vernon discusses the similarities in the Jacura fatality and the Christine Hingley houseboat propeller fatality 22 years ago (July 2, 1993 on Shuswap). Including an interview with a friend with Christine Hingley on the day of her accident. The Hingley accident was also a reversing houseboat.