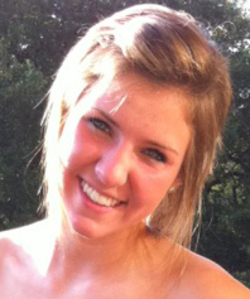 Kali Gorzell was a beautiful, enthusiastic, young woman when she was stuck and killed by a boat propeller 20 July 2012. There was a tremendous outpouring of love from her classmates and her community near San Antonio Texas.

Since then, her parents and family have promoted legislation, now referred to as Kali’s Law, requiring boat operators of certain recreational boats to attach kill switch lanyards when underway. The family’s early efforts failed, but at this moment (early June 2019), the bill has passed both houses and is on the Governor of Texas’ desk awaiting his signature.

We salute the family’s efforts and were touched by the passing of their daughter.

What is Wrong With the Statistics Being Used?

Current media coverage of the proposed rule (Kali’s Law) cites a 2009 U.S. Coast Guard study and reports that study as saying that if all boat operators were wearing kill switch lanyards, 89 percent of ALL boating fatalities would have been prevented.

Data in the Coast Guard study cited by the media actually points to about a 2.5 percent reduction in total U.S. Coast Guard Boating Accident Report Database (BARD) reported boating fatalities. We present those findings in detail below.

Mandatory Wear is an Emotional Issue 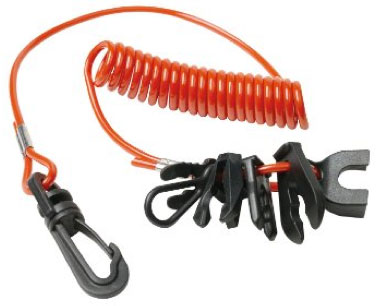 Family’s who have lost loved ones or had them maimed by propellers of unmanned boats in the Circle of Death want to prevent others from suffering similar injuries. They also want the establishment (Coast Guard, state legislatures, and the boating industry) to take action on the issue.

On the other hand, thousands of boaters cite their right to freedom on the water, similar to motorcycle riders objecting to wearing helmets.

As a result, mandatory wear has become a very emotionally charged issue.

Our Position on Kali’s Law

We have remained neutral on the issue of mandatory wear of kill switch lanyards, largely because the issue is so emotionally charged. Both sides have the right to be heard.

With plenty other issues on the table needing our attention, we have purposefully avoided this one (mandatory wear). We have elected to chug along encouraging the wearing of kill switch lanyards while letting others debate mandatory wear.

One of our missions is to make sure statistical accident data put forward by the boating industry, the Coast Guard, or others is accurate. While we may not agree with the actual numbers presented, we at least try to make sure the data attributed to some resource, such as the U.S. Coast Guard, is in fact the data it is purported to be.

Coast Guard accident raw data and statistical data is complex and easily misread. Sometimes, it appears like some purposefully misinterpret Coast Guard accident data to more strongly agree with whatever they are proposing. For example, in the past, the boating industry has cited U.S. Coast Guard accident statistics as a reason why no action should be taken on certain issues. However, the data put forth by the boating industry was wrong. The industry says the Coast Guard reported so many accidents of a certain type when in fact the Coast Guard reported many more. Here are two examples, Brunswick Misled Two Federal Courts on Frequency of Propeller Accidents and Boating Industry Provides Misleading Propeller Accident Statistics.

The boating industry is not the only one providing inaccurate statistics. For example, in the instance of Kali’s Law, media reports have been misreporting Coast Guard accident data.

On multiple occasions we have contacted the authors of such articles and requested them to print a correction. None have. We just contacted another one this week. His inaction led us to publishing this post.

We do not want the State of Texas to anticipate their annual boating fatality numbers will be drastically slashed if Kali’s Law is enacted. What will happen, IF boaters actually attach their lanyards, is some boat propeller fatalities will be prevented. However total annual recreational boat fatality statistics for Texas as reported by USCG will likely be minimally impacted by Kali’s Law. 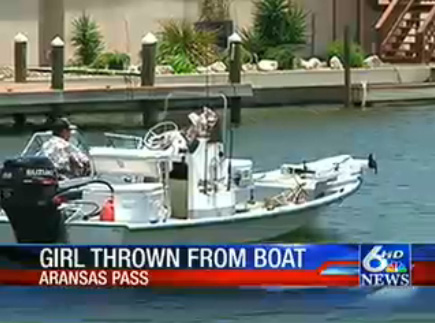 In 2017, nationally there were a total of 31 propeller fatalities across the country per Coast Guard Boating Accident Report Data (BARD). These fatalities represented all kinds of fatal propeller accidents, not just kill switch preventable accidents.

I examined 2017 BARD and found two propeller fatalities reported in the State of Texas. They were Patrick Oliver and his young daughter, Katlyn Oliver both fatally struck by a houseboat propeller in June 2017. That incident was attributed to not having a lookout at the stern when the houseboat was started. The operator wearing a kill switch lanyard would likely not have prevented those fatalities. Thus, Kali’s Law would have had no impact on Texas fatalities related to being struck by a boat propeller in 2017. It is possible someone was ejected and drowned as the boat circled or went on and they were unable to re-board.

Note – not all boat propeller accidents are reported to the Coast Guard and some accidents are not reportable (boats in commercial use, government use, military use, TWPD use, boats being used in a crime, etc.)

The real USCG BARD statistical benefit of Kali’s Law in 2017 in Texas would have been in preventing serious injuries resulting from kill switch preventable accidents (preventing injuries, not fatalities).

Below is the most recent example of the news reports we have seen misquoting statistics.

While we concur, that if Kali’s Law were passed, AND more Texas boat operators obeyed that law, boating in Texas would be safer. However we do not agree with the statistics presented in the article.

We clipped out the area of concern and copied it below directly from the image of the news item. 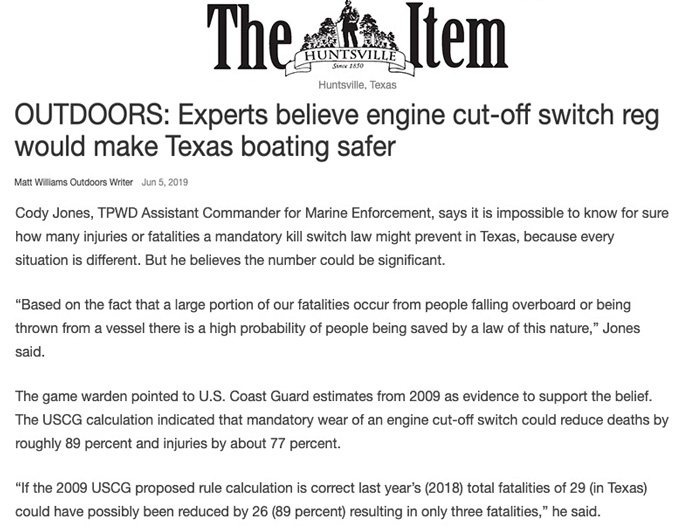 The news clip above cites a 2009 Coast Guard report. The report they are referring to is titled:

The 2009 report listed above is available online from the red PDL icon on this Regulations dot Gov page.

Very basically, the Coast Guard used two different processes to evaluate 2002-2006 fatal boating accidents that may have been preventable by the use of a kill switch lanyard in an effort to estimate how many lives might have been saved.

The quote below comes from page 3 of USCG’s report and summarizes findings of the first process / approach.

“The first method consisted of a review panel comprised of members of the Boating Safety Division attributing “Yes”, “No”, or “Maybe” preventable determinations to the selected accident records. Using this method, the review team determined 89 deaths would likely have been prevented had an engine cut-off switch been in use by the vessel operator.”

Note, this process identified 89 fatal accidents over this four year period across the entire United States in which the fatality would likely have been prevented by use of a kill switch lanyard. NOT 89 percent of all fatal boating accidents.

The Coast Guard study cited above made no efforts to estimate percentage reduction in total recreational boating BARD reported fatalities if all boat operators were wearing kill switch lanyards. However, 89 fewer fatalities divided by 3,536 fatalities from 2002 to 2006 equals a 2.5 percent reduction in total fatalities not the 89 percent being championed by the press.

How Effective Would Kali’s Law be at Reducing Texas Boating Fatalities?

As described above, per 2017 data, the most recent available at this time, there were two propeller fatality accidents in Texas in 2017 and neither appears preventably by use of a kill switch lanyard.

While being struck by the boat’s propeller may be the most frequent cause of kill switch preventable accidents, there are other ways to died of be killed in these events such as:

1. Being struck by the marine drive or an appendage of the boat.
2. Being fatally struck by a runaway boat (which can also happen to an individual on another boat or an individual already in the water unrelated to this vessel).
3. Drowning after being ejected because the boat continued to circle, the boat left the area, those on board were non-swimmers, rendered unconscious during ejection, alcohol or drug impaired beyond their ability to swim, or injured beyond their ability to swim during their ejection.

Either way, the number of kill switch preventable fatalities in the State of Texas in 2017 based on U.S. Coast Guard statistics is zero or some small number.

It is not 89 percent of all fatal Texas boating accidents.

Plus please note other states have discovered that even if you have a law requiring mandatory wear of kill switch lanyards, the actual wear rate may still be quite low.

We do not want Texan’s to be mislead by the statistics presented.

We encourage Texas media outlets to quote the correct statistics. If your firm has printed misleading statistics in this matter, we encourage you to print a correction.

If Kali’s Law is passed and Texas annual boating fatalities remain approximately the same, we do not want that experience to prevent other proposed interventions which may truthfully be able save greater numbers of lives to be rejected based upon the performance of Kali’s Law.

It is somewhat like when the passed the State Lottery in Oklahoma. We were told how many millions of dollars this was going to make for education and all our problems would be solved. In reality, it made only a fraction of projections and much of the existing funding for education was diverted elsewhere vs. the lottery funding truly being a bonus in addition to our regular education funding. If another similar lottery proposal were to come forward in Oklahoma now, opposition to the proposal would be much more energized and fueled by past unfulfilled promises. We do not want that to happen with boating safety in Texas.

We are not faulting the Texas Parks and Wildlife Department Officer cited in the article and think we may have actually met him. The officer may have been confused or the press may have misquoted him.

We also know the press can be a great boating safety tool. For example this article by The Houston Item spreads the word about the need to attach kill switch lanyards.

We wish the press well. We just want them to print correct statistics regarding kill switch and propeller related accidents.

We have been going through similar battles with the press since our origins and have become discouraged at times. However, we hope at least some of our efforts have aided in getting the proper statistics out in front of citizens, boaters, and the boating industry. 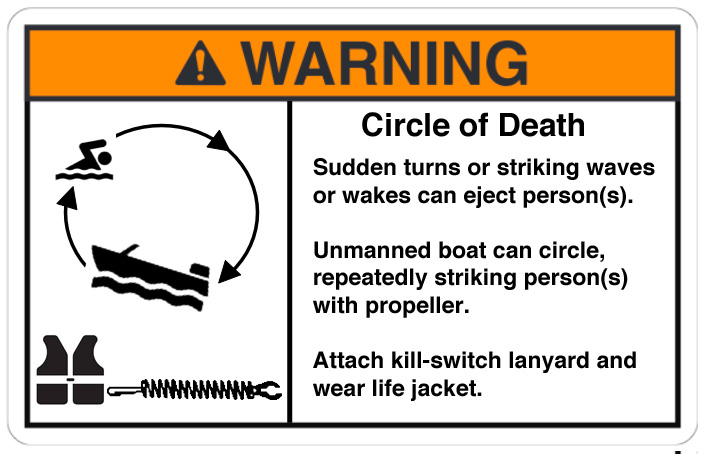 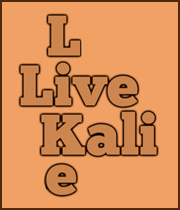 We close with an image we created back at the time of Kali Gorzell’s death from the phrase coined by her classmates and friends, Live Like Kali.