We noticed several reports in the news this morning about the new graphic cigarette warnings being released today. A report in the Washington post says their are nine new images and they will be required on all cigarette packs as part of ” a new powerful warning strategy.” The photos are very graphic and portray things like people smoking through tracheotomy holes, rotted teeth, and damaged lung tissues.

The final nine images were selected after reviewing the technical literature, reviewing over 1,700 public comments, and testing them on 18,000 people. Cigarette packs must bear the warnings to be sold in the U.S., and those warnings must cover half of the front and back of each pack, beginning October 22, 2012. The warnings must also cover 20 percent of each large display advertisement.

Other images and technical details of the warning program can be viewed from Cigarette Health Warnings on FDA’s web site. 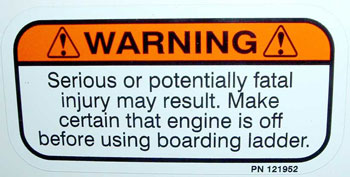 In comparison, the U.S. Coast Guard backed down from supporting the propeller safety public service announcement, Don’t Wreck Your Summer, due to industry claims it was too graphic and showed boating in a bad light. BIRMC (Boating Industry Risk Management Council) is still working on developing a propeller safety warning label they announced to the press in 2005, and the existing propeller safety warning labels still fail to meet ANSI Z535 standard, and in our opinion, they are lame. For example, the one at left does not even mention the word propeller.