Mercury Marine has been talking for some time about developing a system that uses lights to alert people in the water the propeller is turning. That system has now been released as the Moving Propeller (MP) Alert System.

A four inch light at the stern contains six amber colored LEDs. When the engine is started, they begin to flash, then they remain lighted. When the drive is put in gear the lights begin to blink in a rotating pattern similar to the rotation of a propeller. 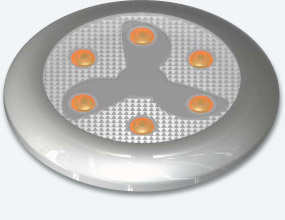 MP Alert is made possible by Mercury Marine’s CAN-bused SmartCraft system. Vessels with multiple engines can have one light for each engine.

The lights automatically dim in the dark so they will not be confused with navigational beacons and have an optional dash mounted switch that can be used to turn them off. If you turn them off, a status light will remind you to turn them back on.

Mercury says they brought the product to market because more people are in the water near boats now with the increase on water activities, and engines are getting quieter. It is getting more difficult for people in the water to tell if the engines are running.

The LED lights go out above 2,000 to prevent a constant battery drain.

docktime TV has a nice video on YouTube taken at Mercury Marine’s booth at the 2011 Toronto Boat show showing a mock up demonstration of the MP Alert System.

Mercury says they are visible for nearly 180 degree arc from the stern, and use a durable plastic that resists fading and coloring by the sun.

We see they are currently priced at $316.58 on Mercury Parts Express for those wishing to purchase them for field installation on existing boats. We estimate having a dealer install one would likely cost close to $400 for parts plus labor.

We salute Mercury for bringing a propeller safety product to market and encourage their further work in this area.

At the same time we note, Mercury’s device is pretty expensive, especially for multiple drives. Being based on the SmartCraft system it incurs some additional base costs as well. We posted a Moving Propeller Alert System – Self Contained, Economical Version – Senior Design Project on our list of possible College Student Projects. There we promote the idea of developing a low cost self-contained version of Mercury’s Moving Propeller Alert that is solar, vibration, heat, or otherwise self powered that detects all drives on the boat at once by detecting their vibrations or noise.