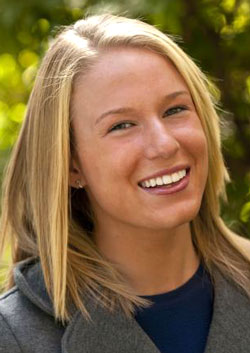 Casey Shulman, 22 year old fourth year University of Virginia (UVA) student from Falls Church Virginia, spent the Fall 2012 semester on a 14 week “Semester at Sea” program. The semester for this University of Virginia program was winding down in early December 2012. Their vessel, the MV Explorer, with 54 UVA students on board along with hundreds of students from other Universities was completing its Fall 2012 Atlantic Exploration voyage and stopped in Dominica about 7am Saturday December 1, 2012. Dominica is a small Caribbean island locally billed as “Nature Island” near Martinique, just south of Puerto Rico. The area is well known for its snorkeling and diving attractions.

About 9am, a group of students hired a boat from Anchorage Dive Center captained by Andrew Armour, for a snorkeling expedition off Soufriere. The trip was not part of the “Semester at Sea” program. The students snorkeled then went to the west end of the island near Mero where they lounged on the boat, played in the water, and rested on the beach. Mero is about five miles from Roseau, Dominica’s capital and largest city.

About 2:30 pm while Casey Schulman was in the water, the boat had picked up some food and was reversing when she was struck by the propeller. She was taken to Princess Margaret Hospital, and pronounced dead. Initial reports say Casey Schulman “sustained injuries all over her body.”

The community of Mero expressed their condolences a few days later in Dominica News Online. The President of the Mero Enhancement Committee (community near the accident) said:

“I want to commend the people of Mero in their assistance in getting a small fishing boat and life guard equipment to tow the late Casey Schulman’s body out of the water. They were already equipped with a first aid kit but the ambulance was there ready.”

A Memorial Service is planned for Saturday December 8th in the District of Columbia at the Roof Terrace Restaurant of the John F. Kennedy Center for the Performing Arts at 11 am. The address is 2700 F Street NW. Her family said all friends and family are welcome to attend. It was announced in the Washington Post.

After the Propeller Accident some searchers spell as Casey Shulman

A commemorative service was held on the “Semester at Sea” vessel on Sunday December 2nd at 8 pm. One was held at UVA the same evening. At the request of her parents, a “memory box” was placed on the vessel for students to share photos and stories. 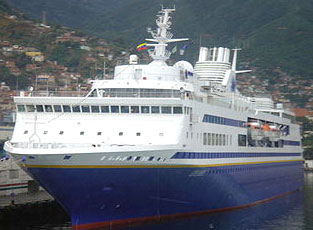 The MV Explorer stayed with its previous plans and departed Dominica at 8pm Sunday evening December 2nd to return to Fort Lauderdale, Florida on December 8th. Grief counseling and support is available with the Institute of Shipboard Education. UVA students, faculty, and staff could receive support over the weekend from Counseling and Psychological Services.

Tuesday December 4th was reserved as a “Reflection Day”. The captain navigated MV Explorer in three full circles and a flowers were tossed into the ocean.

A parents reception will be held at Fort Lauderdale on December 6th and the vessel will return to Port Everglades on December 7th at 7 am.

MV Explorer is the vessel the University sent out on the semester long expedition. M/V Explorer is a large vessel. It is a 590 footer built in 2001 that previously served as a cruise ship. Maximum capacity is 836 persons. It is the boat that delivered the students to Dominica.

Once on Dominica, some students, including Casey Schulman, chartered a boat to go out snorkeling from Anchorage Hotel, Whale Watch, and Dive Center.

On December 6, 2012 Anchorage Hotel, Whale Watch, and Dive Centre (home of the charter vessel) released a statement. They expressed their sadness in the accident and stated they had never before had an accident in their 40 years of operation. The statement continued and said their captain, Captain Andrew Armour, had 30 years of experience (we note a comment added to a previous news article by one of his friends stated he had been a captain for 14 years). Anchorage identified the particular charter the group was on as a “Catamaran Sail & Snorkel Party Cruise”. They referred to the accident as a “freak accident off Mero beach.” 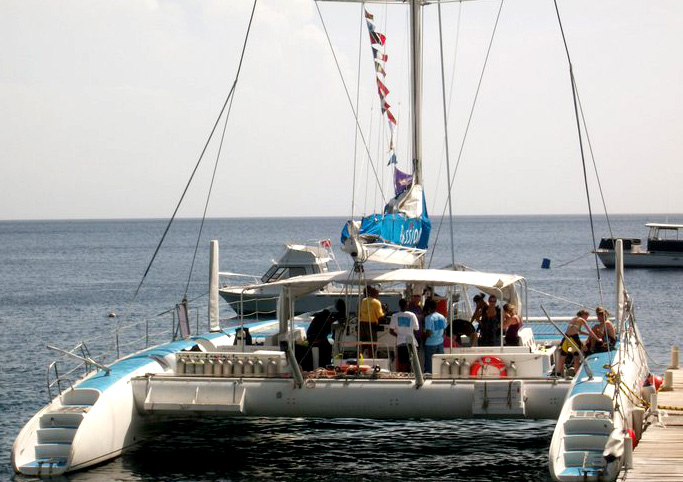 Anchorage Hotel furnished the Sail Cat image of “Passion” above and identified it as the vessel involved in the accident. Previously we had theorized it might be one of their other boats, a 39 foot diesel that handles 25 divers, and a 30 footer that handles 14 divers.

“Passion” is similar to other large Sail Cats we have seen involved in some similar propeller accidents elsewhere around the world. The engines are in the twin hulls.

A Map of the Accident Events in Dominica

Below is a map of several locations on Dominica mentioned in media coverage of the accident.

Before stopping in Dominica, the “Semester at Sea” vessel was scheduled to have visited Nova Scotia, Ireland, London, Belgium, Portugal, Spain, Santa Cruz Tenerife, Canary Islands, Ghana, South Africa, Argentina, Uruguay, and Brazil. The accident happened in Dominica on their last day before heading back home.

While these excursions may provide great opportunities, they are very expensive. The annual circumnavigation trip is about $25,000 and a Fall 2013 version of the Atlantic Exploration voyage Casey Schulman was on costs about the same. Those fees include food, housing, tuition, etc.

Not everybody is a fan of “Semester at Sea”. The Cherese Mari Laulhere Foundation has a website calling it a dangerous program. They claim the program began at the University of Pittsburgh, had several fatal accidents, including a 1996 fatality involving the young woman the foundation is named after. They say Semester at Sea / Institute of Shipboard Education (ISE) were found guilty of negligence in the death of this young woman in a Pennsylvania court in March 2011 and Semester at Sea moved to University of Virginia as a result of these safety issues. They also claim some of the same individuals are still operating the program. We are making no statements as to the accuracy of these claims, we are just pointing out that such claims are being made.

Casey Schulman graduated from J.E.B. Stuart High School in Falls Church where she co-captained the the high school cheerleaders and graduated with honors in 2009. Loved by many, some of her friends gathered to reminisce about her life and came up with a plan to create “What Would Casey Do?” bracelets. (Similar to “Live Like Kali” movement created after Kali Gorzell was killed by a propeller earlier this year).

Casey Schulman spoke Spanish, said she never missed a class on the MV Explorer, and particularly enjoyed “Information Technologies and Global Change” and “Topics in Social and Cultural Anthropology. Friends say she always ate outside for a better view while onboard the MV Explorer. She had a small white piece of paper on the wall by her bed onboard that said “thankful” .

Casey was majoring in Foreign Affairs at UVA, was a member of Alpha Phi sorority, and enjoyed intramural sports. She worked at a Charlottesville restaurant, The Backyard, for several years before it closed this summer. She interned at ABC7 / News Channel 8 in Arlington, Virginia the summer of 2011. She also tutored immigrant workers at the hospital in Charlottesville.

Her family and friends report her making the most of everyday, being very kind, and bringing sunshine in the room when she enters. A University of Virginia press release said, “she radiated happiness.”

Casey Schulman’s family was having problems getting responses from Dominican authorities concerning her death, so they hired some lawyers. We cover her family’s efforts on our Schulman Family Seeks Justice in Dominica post.

A big thanks to many newspapers, online media outlets, and television stories for covering this accident. Special thanks to the following publishers from which we obtained much of the information above:

Several comments to other news stories provided information that may or may true as it usually takes a while to sort out the facts after an accident of this nature:

We searched for Sail Cat and powered catamaran excursion boat propeller accidents around the world and identified several accidents very similar to the Casey Schulman accident. Our Catamaran Dive, Snorkel, & Party Boat Propeller Accidents page provides a list and brief discussion of them.

There have been many similar accidents involving tourists being struck by propellers in diving and snorkeling sites around the world. We had long been considering trying to develop a list of them and this accident provided the impetus for us to start. Our list of tourists involved in snorkeling and diving accidents is now underway. Our “list” also identifies some of the challenges related to these accidents happening in remote locations with emergency response problems, without access to advanced medical care, questionable accident investigations, government protectionism, and legal ramifications.

We previously covered some of the more notable snorkeling tourist strikes including the Kirsty MacColl accident and a tourist snorkeler being struck by a propeller on underwater video in Egypt.

Links to More Information About the Casey Schulman Accident