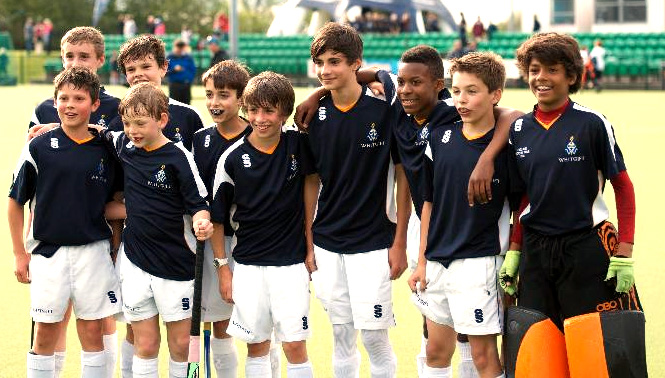 Charlie Hutton on 2011 Whitgift Field Hockey Team.
He is on the front row, third boy from the left

A rescue helicopter responded rapidly from a nearby training mission and took him to a hospital, but he did not survive.

On Thursday 31 January 2013, Caroline Sumerary, Her Majesty’s Coroner for the Isle of Wight, held an inquest into the death of Charlie Hutton.

The inquest revealed many more details about the accident.

Charlie Hutton’s father, Simon Hutton, started sailing at age 12, had been through Royal Yachting Association training, and had spent decades around boats. He said they were going from Alum Bay to Mudeford in Dorset. He slowed down from 25 to 30 knots they had been running when the water become more choppy. They were in a Cobra 6.5 meter RIB he purchased in 2010. The teenagers were wearing life jackets or buoyancy aids and Charlie’s dad was wearing a kill cord to stop the engine at the time of the accident.

Two waves came at the boat from the side, then the water dropped and a big five foot wall of water washed over them. That wave washed off Charlie and one of his friends. His father is not sure how the boys entered the water. They may been washed the length of the boat and off the stern.

His father saw the other boy behind the boat, but could not locate Charlie. He yelled for Charlie, saw what he thought was oil in the water, then realized it was blood. He found Charlie caught on the propeller at the stern. He tried to pull his son in, but he couldn’t. As Charlie’s expression was saying “Dad, help me”, his father cut Charlie’s trousers to free him from the prop. He cradled Charlie in his arms and laid him across the three seats. During that experience Charlie’s eyes were open, his father was trying to protect Charlie’s face, and was telling him he loved him.

Charlie’s eyes began to roll, his breathing became more shallow and his father thinks he died at that point. The rescue chopped still in enroute advised him to begin performing CPR which he did. When the chopper arrived, Charlie was life flighted to Southampton General Hospital where he was declared dead. His father phoned his wife and said, “I think I have killed Charlie.” Charlie’s father and the other two boys waited for a lifeboat. The other injured boy suffered a fractured fibia and a broken toe. The father struck a flare so the RNLI lifeboat could find them quicker.

His father said, he thought the boys were safe and did not think he was going too fast.

Caroline Sumeray, Isle of Wight Coroner, ruled the death to be accidental and asked the leisure boating industry to promote propeller safety and awareness. She said, “That would be a fitting legacy for Charlie.”

The father said that if they boat had been equipped with a propeller guard, his son would have probably survived. He went on to say, “If I had been aware of them I would probably have had one fitted.”

Charlie Hutton was a well known, bright, young boy with a tremendous future. He came from a family able to send him to one of the UK’s best known private schools at which Charlie excelled in music and at a national level in Field Hockey. He hoped to play for Britain in the 2020 Olympics.

The official report says Charlie Hutton died of multiple pelvic and left leg injuries after becoming entangled / entrapped in the boat propeller. The femoral artery in his leg had also been cut which caused him to loose a lot of blood.

We extend our condolences to the Hutton family. We would also like to thank Caroline Sumeray, Her Majesty’s Corner for the Isle of Wight, for encouraging the boating industry to promote propeller safety and awareness. We hope they listen.

Special thanks to the many news outlets that covered the Coroner’s Inquisition whose stories were used to compile this page: