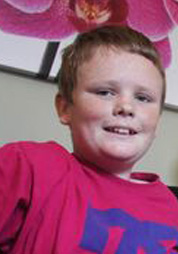 Cian Williams, then 13, was struck by a boat propeller in August 2012 in Wales. Since the strike, Cian and his mother have been among the leading propeller safety advocates in the UK. Cian has been gathering names on a petition to change Welsh law to require propeller guards on boat propellers.

In the wake Cian and his mother’s efforts, the statement by the Isle of Wight Coroner in the investigation of the Hutton fatality, the double fatality Milligan accident, the Princes Club fatality remaining in the legal news, and the re-entry of Heddon Johnson as a propeller safety advocate, considerable interest has been focused on boat propeller safety issues in the UK.

In response to a letter from Cian’s MP Elfyn Llwyd to Sir Alan Massey at Maritime and Coastguard Agency (MCA), MCA announced that they were going to:

“look at different ways of guarding the propeller.”

Now, months later, after things have cooled off a bit, MCA has changed their tune.

MCA’s softened stance is revealed in an interview published in the 26 December 2013 Daily Post in the article titled Cian Williams, Boat Propellers Must be Fitted with Guards.

“Safety is our main priority. We encourage people to have fun, but also to take personal responsibility for their safety. We have been working with our partners – such as the RNLI and Royal Yachting Association – to explore the possibility of using propeller guards on speed boats, but, in most cases, this would be counter-productive, causing other safety issues such as problems with manoeuvrability.” … “There are better ways of ensuring safety, including better training of skippers, awareness of swimmers, and use of kill cords. We don’t propose to make propeller guards mandatory.”

Cian Williams is understandably upset with the MCA’s reversal on this issue.