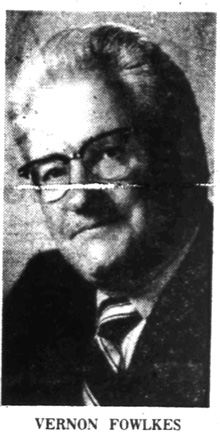 In addition to contestants, several celebrities were invited to participate in the tournament. Among the celebrities were Vernon Fowlkes, 53, a bass fishing industry supplier, co-founder of the nations first local bass organization (Tulsa Bass Club), and a Classic Sponsor. Fowlkes was well known for his Fo-Mac company’s rod holders, water temperature gauges, and “Ugh! Button” rod butt caps. Remnants of his company are still ongoing in Tulsa.

Vernon Fowlkes was teamed with Charles Brown (a local angler), and with Sam Powell, who went on to be a longtime outdoor writer for the Tulsa Word. Sam wrote for the Tulsa World for 37 years (1971-2008), retired, and died at his home in June 2014. 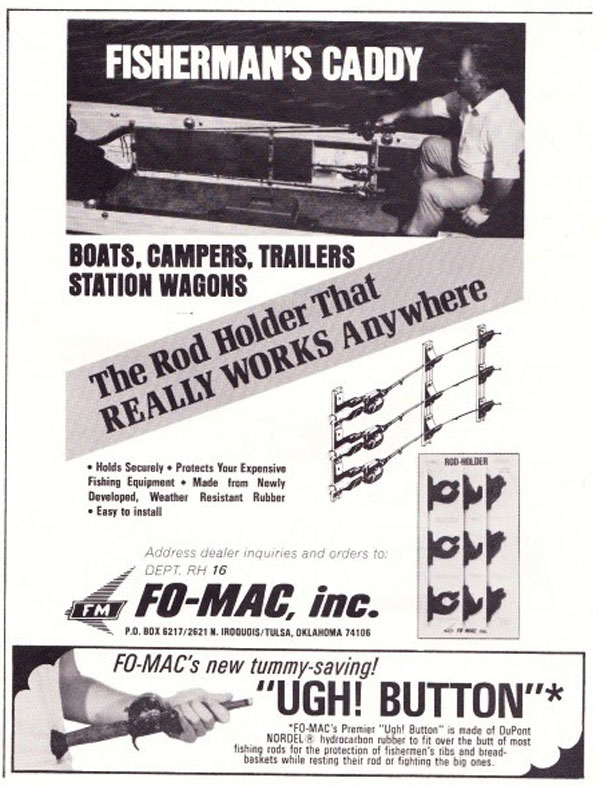 The story of Vernon Fowlkes 1973 accident as re-told by BassMaster magazine in 2008.

At the end of the day, all boats were headed for the weigh in.

“They (Fowlkes, Powell, and Brown) were running wide open into the main area when the steering cable on the engine broke and threw the engine into a full torque. The powerful prop flipped the boat over on its side, throwing all three men into the water. The boat made a complete circle and the prop struck Fowlkes’ body, killing him.”

The article goes on to note, Ray Scott, re-known bass tournament promoter, responded to Fowlkes’ death by creating a rule requiring all boats in his bass tournaments be equipped with a “kill switch”.

Fowlkes’ 16 foot bass boat was powered by a 125 horsepower outboard and is referred to as a “powerful outboard” in BassMaster’s coverage of the accident. Most reports cite the motor as being a 125 horsepower outboard. At least one report says it was a 135 HP outboard. The boat was a loaner from one of Charlie Brown’s friends. It had been lent for use by visitors and writers at the tournament.

The Tulsa World reports Fowlkes died from “massive lacerations on the thighs and his right arm.”

While several accounts say the boat circled and struck Vernon Fowlkes, the early account from the Tulsa World states:

“It was not known if the boat circled back over Fowlkes, allowing the prop to inflict the fatal injuries or whether he was sucked under the boat after being thrown from the craft.”

Tulsa World and most other accounts attribute the accident to a steering failure. The Tulsa World said:

“Officials said that a nut which connected and held steering linkage on the big motor apparently worked loose allowing the motor to suddenly torque to one side. There have been numerous such accidents all over the country in recent years.”

Tulsa World goes on to say Brown, 34 and a member of the local Bassmasters, was operating the boat. They have been underway about 5 minutes and were entering the main part of the lake. All of a sudden the boat skidded sideways. Powell was tossed high in the air, and tumbled end over end behind the boat. When Powell surfaced, the boat was upside down with the prop still rotating. Powell says help was quickly on the scene and Fowlkes was back at the dock within about ten minutes of the accident. He was given first aid, then taken by ambulance to a local hospital. He died in route to the hospital.

The Abilene Reporter News distances Fowlkes death from the Classic. It says he was there because he had some equipment on the Classic boats, went fishing with a local fellow, the steering mechanism went out, the boat torqued, and ejected them.

“When a boat torques it goes into a tight circle (until stopped or it runs out of gas) and Vernon was in the wake or path of the unattended boat.”

“Equipped with a 135 HP engine, probably turning around 6000 RPM’s, it virtually cut Vernon to ribbons and he bled to death before he could be cared for.”

Abilene Reporter News says all the boats at the Classic were equipped with kill-switches and if Fowlkes had been using a boat equipped with a kill switch there is a 90 percent chance or better that he would still be alive. They go on to say a new rule for 1974 will require all BASS tournament boats to be equipped with kill switches.
Note – their version considerably differs from others, including that of Bassmaster themselves. Abilene News Reporter says the fishing tournament was already requiring kill switches, vs. the change being made after the accident.

Aiken Standard (South Carolina) covered the accident, then spoke to the use of kill-switches:

“The outboard continued to run briefly and the boat overran Fowlkes, the prop striking his head and causing death. Such accidents are all too common, and one way to prevent them is to have installed a so-called “kill switch” that automatically cuts off the big outboard when the unexpected happens. It is a very worthwhile safety precaution, for being hit by a prop is just like being chopped with a heavy sword or ax. According to statistics, the person most likely to be involved in a boating accident is one in his mid-30’s. He will also be an experienced boater with an average of 500 hours of boat operation behind him. It pays to be careful!”

Some reports say Vernon Fowlkes was unable to dive and avoid the oncoming boat because he was wearing a life jacket.

Others (including Bassmaster) say Roy Clark a celebrity from his weekly appearances on “Hee Haw”, Carl Lowrance (Lowrance Electronics out of Tulsa), and a guide were on a nearby boat. They rushed to the accident site, and dove in to assist Mr. Fowlkes.

The Oklahoman’s headline was particularly attention grabbing, “Powerful Fishing Rigs Can be Deadly”. 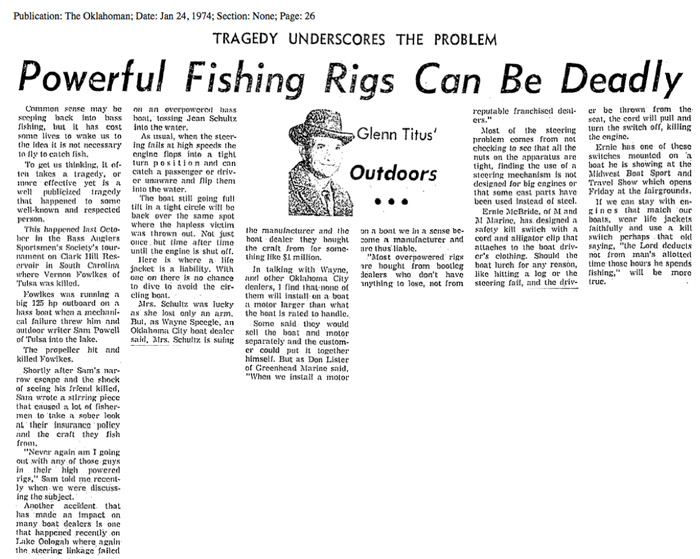 The Oklahoman goes on to identify yet another kill switch inventor in this era (Ernie McBride of M and M Marine). George Horton of Fort Worth is generally recognized as the first to invent and commercialize a kill switch designed for use in recreational boats (see History of Lanyard Kill Switches). Horton’s patent was filed in 1972 and issued in January 1974.

Fowlkes’ body was flown back to Tulsa where funeral arrangements were being made by his survivors, including his wife, two daughters and a son.

Special Thanks to Research Wizard group at the Tulsa Public Library

The Tulsa Public Library (the downtown library), is currently under major renovation. For over 30 years they have met the research needs of local business and citizens with their research team known as the Research Wizard.

We were aware a feature article on Mr. Fowlkes’s death appeared in the Tulsa World in late 1973 but were unable to obtain a copy. We only identified one possible source 1970’s Tulsa World newspapers, microfilm reels belonging to the Tulsa Public Library.

Tulsa Public Library downtown moved their microfilm and certain other reference materials offsite to a holding area during renovation of the downtown library. They allow patrons to schedule time blocks to do hands on research of those materials on certain dates. I was planning to be in Tulsa for other purposes on a date they do not normally schedule research blocks on. However, Research Wizard accommodated me and even helped me search the microfilm.

Tulsa Public Library let me use their latest addition, a computer operated microfilm reader. The reader is controlled by mouse clicks on the computer screen. Images can be captured from the computer screen and saved to disk or emailed to the patron. It was quite an experience of blending old and new technologies.

A big thanks to the Tulsa Public Library Research Wizard for having and maintaining those documents, for allowing me to come in on an unscheduled date, for assisting me, and for letting me see/use their latest technology microfilm reader.

Why we chose to cover the Vernon Fowlkes accident

We chose to cover this accident because it happened over 40 years ago, and similar accidents are still happening today. The boating industry has still not responded to the problem.

For example, see our coverage of the Jonathon McClure fatality here in our own state of Oklahoma earlier this year (2014)

AND our list of over a hundred similar accidents at Bass Boat Operators Ejected Overboard Underway in Open Water.