Although the U.S. Coast Guard is still considering regulations that would require boat builders to install kill switches (emergency engine cut-off switches) in all new recreational boats below a certain length and separately considering making their use mandatory, they have been on the market for over 30 years.

The basic problem of unmanned boats going in circles (the Circle of Death) has been known a long time. The earliest example we have found was reported 14 July 1935 in the New York Times. Two young men on the Potomac River were ejected, the boat began to circle at full throttle, they dove repeatedly to try to escape to boat and propeller, one was eventually struck in the head and drowned, the other was struck in the shoulder.

George Horton, of Fort Worth Texas, applied for a patent on his “Quick Kill” recreational boat kill switch on 29 November 1972. He received U.S. Patent 3,786,892 on 22 January 1974, and entered productions with the “Quick Kill” kill switch in August 1974. His switch is widely viewed as the first commercially available kill switch designed specifically for use in recreational boats, vs. the earlier racing designs. 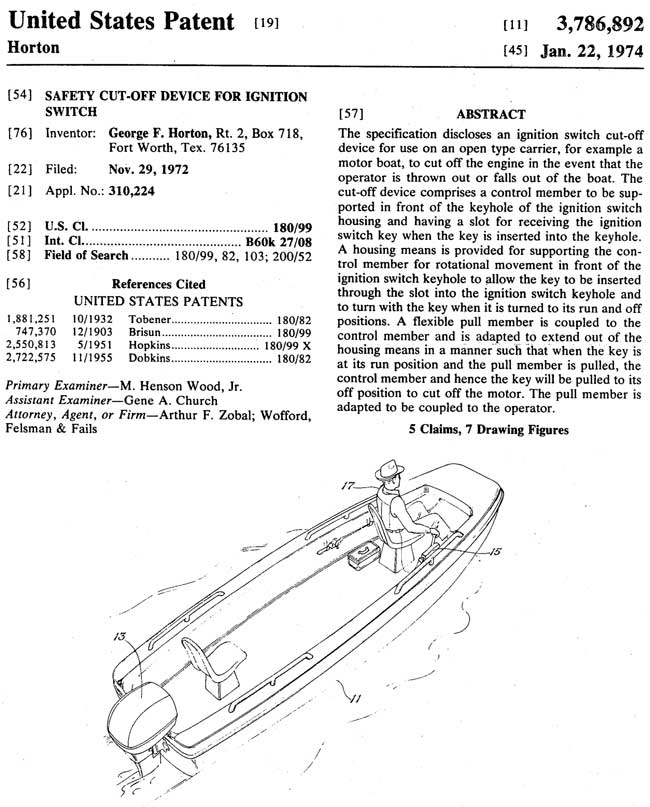 UPDATE – While Horton’s “Quick Kill” is widely viewed as the first recreational kill switch on the market, we came across an interesting article covering another switch a just little earlier. Powerful Fishing Rigs Can be Deadly. The Oklahoman. January 24, 1974. Page 26.

“Ernie McBride of M and M Marine, has designed a kill switch with a cord and alligator clip that attaches to the boat driver’s clothing. Should the boat lurch for any reason, like hitting a log or the steering fail, and the driver be thrown from the seat, the cord will pull and turn the engine off, killing the engine.”

The article reports the kill switch is in a boat M&M will be showing at the Midwest Boat Travel Boat Sport and Travel Show which opens Friday at the fairgrounds.

Still others developing kill switches for recreational boats in this era and even earlier include:

In October 1973 Vernon Fowlkes, a supplier to the bass fishing and bass tournament industry from Tulsa Oklahoma, was killed during the 1973 Bassmaster Classic III tournament in South Carolina. As part of a group of celebrities at the tournament, Fowlkes, a sportswriter, and a local bass fisherman were headed back for the weigh in, the steering cable broke, the boat ejected all three men, circled, and the propeller fatally struck Mr. Fowlkes. Ray Scott, the well known bass tournament promoter, is said to have created a rule requiring all bass boats used in his tournaments to have a kill switch as a result of this accident.

In August 1974, Popular Mechanics published an article titled, “This Switch Can Save Your Life: Now Required for Racing, and Tournament Fishing. This is Boatingʼs Newest Necessity”, assailing the features and benefits of Mercuryʼs Quicksilver Ignition Stop Switch. 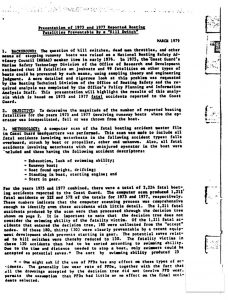 A presentation on boating fatalities that could be avoided by the use of kill switches, “Presentation of 1975 and 1977 Reported Boating Fatalities Preventable by a Kill Switch”, was given at the Spring 1979 NBSAC meeting. Interestingly, it is quite similar to a document prepared by USCG titled, “Casualties Preventable by the Use of an Engine Cut-Off Switch” included in the USCG-2009-0206 docket published as an Advanced Notice of Proposed Rulemaking in June 2011. The front page of the 1979 document is provided here.

July/August 1975 Boating Magazine letter to the editor wonders why the Coast Guard Office of Boating Safety failed to mention kill switches in their response to a letter in May. The current commenter talks about runaway boats coming at those who fell overboard in ever decreasing circles, says kill switches are required in bass fishing tournaments, and are sold by many marinas.

1978, 1979, and 1980 saw the Valerie Bailey v. Boatland of Houston trial and its appeals. Bailey v. Boatland was one of the first cases against the industry for injuries allegedly caused by their failure to install kill switches. Sam Bailey was killed on 27 May 1973 at Lake Livingston (Texas) in an accident involving a circling 16 foot bass boat that was claimed to be defective because it did not include a kill switch. Much of the litigation centered on timing (date of building the boat, date of the accident, date of invention of kill switch, date kill switches for recreational boats became commercially available). The boating industry won the case in the trial court, lost the first appeal, then won again in Texas Supreme Court. The Texas Supreme Court took a hard line on commercial availability of kill switches for recreational boats vs. easily adapted from racing boats or other applications. There was also some discussion of the responsibility of the dealer (Boatland) vs. that of the manufacturer during the trials.

1979 Alabama passed a law requiring the mandatory use of kill switch lanyards on certain boats.

Thanks to Stop Propeller Injuries Now (SPIN) for allowing us to borrow some items from their kill switches history. We both maintain our own history of kill switch events but we share some of the individual entries back and forth.