Marc Craddock vs. The Golden Rule

This interesting legal case grew out of the 17 October 2014 boating accident in which a 1500 horsepower boat, M/V The Golden Rule, ran over a snorkeler and struck him with its propeller(s). The boat was a gold colored 43 foot Midnight Express powered by five 300 horsepower Mercury Verado outboard motors.

The snorkeler, Marc Craddock, has brought a suit against the vessel itself. In an interesting twist of events, he openly claims the accident happened in navigable waters to gain access to Admiralty Law. Then under Admiralty Law he is allowed (or purports to be allowed) to claim a maritime lien against the vessel for his injuries due to the negligent operations of the vessel.

The complaint was filed 3 November 2014.

The official case citation is: 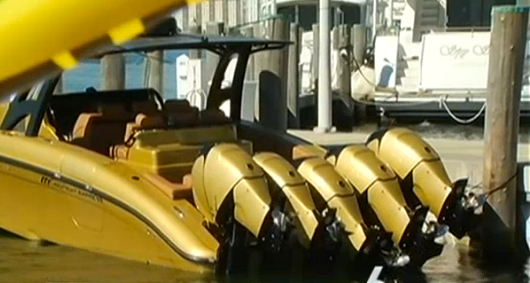 A. Gordon and his father, M. Gordon are the managers of FLC Marine LLC.

Craddock goes on to claim the owner or operator of the Golden Rule breached their legal duty of responsible care to him in these circumstances by a number of bullet points. Basically he claims they were not following the rules or laws, were moving at an excessive speed, and failed to operate in a reasonable and prudent manner. Craddock then claims these negligent acts led to his injuries, pain and suffering.

He is trying to accomplish this in part by placing a maritime lien against the boat for a portion of his injuries, pain, suffering, and other costs.

We are used to boat builders and marine drive manufactures trying to enforce the Jones Act / Maritime Law to limit their potential costs to a maximum of the value of the boat and its contents. Traditionally, a used recreational boat is not worth much, and the contents are worth even less than that. However, in this instance, the boat is worth a lot of money. So, Marc Craddock’s lawyers tried to turn the table on them.

Things are still being sorted out in court, and the other side is obviously fighting against the lien.