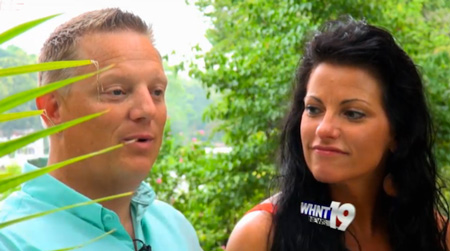 WHNT 19 News (Huntsville Alabama) ran a great article titled, Boater Beware of a family recently ejected from a fishing boat, the boat circled, and struck both of them with the propeller.

Jason Simmons, an elementary school principal, and his wife, Anna, were returning Sunday evening March 29, 2015 from a fishing trip on Wilson Lake. Running about 55 mph, his sunglasses started to blow off, he took his hands off the wheel momentarily as he reached for them, the boat swerved hard to the right due to propeller torque, Jason and Anna were both ejected, and the boat began to circle in the Circle of Death.

Jason Simmons, a boater for 25 years, reports “the boat turned around. I did not have the kill switch on, so the boat turned right back around and ran over us both. And it cut my leg halfway off.”

Emergency responders were quickly on the scene and cold water temperatures helped prevent massive blood loss. Both survived, and now they want to share their story in an effort to prevent others from having to go through the same thing.

WHNT News filmed a tremendous video similar to a U.S. Coast Guard Public Service Announcement (PSA) allowing Jason and Anna to get the word out to hopefully save at least one viewer from similar experiences.

We would especially like to thank Jason and Anna Simmons for being willing to share their story and WHNT News, David Wood and Drew Galloway (video), and Jerry Hayes (news anchor) for putting together such a great video. Although many propeller strike victims and their families have spoken out to trying to prevent propeller accidents, this is first time we recall seeing such a high quality video from a television news network supporting their efforts.

We encourage all boating safety organizations to link to this video on the WHNT News site or the same video on YouTube.