Mark Barhanovich was killed 16 September 2012 when his 23 foot center console fishing boat struck a dredge pipe off Deer Island, Mississippi. The 225 horsepower Suzuki outboard motor broke off and flipped up into the boat, fatally striking him with its still rotating propeller.

Position of the Deer Island, Mississippi barge associated with the dredging operation per USCG 2012 Week 37 Local Notice to Mariners dated September 12, 2012. Deer Island is the long thin island to the south west of the barge (red balloon).

The United States Attorney’s Office filed criminal charges against Bean on Friday 16 October 2015 for not properly marking the dredge pipe. 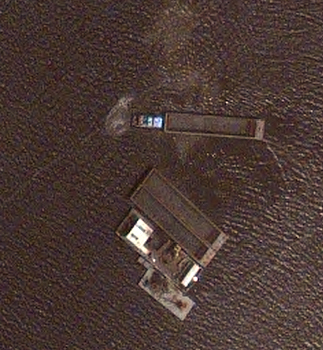 Satellite image of Bean 20 barge and operations off Deer Island in September 2012.

A Bean barge, the Bean 20, was staged off Deer Island to accept dredge spoils from a dredging operation in Gulfport, Mississippi. Spoils were delivered by hopper barges to the Bean 20, then pumped onshore as part of a project to restore portions of Deer Island.

A U.S. Department of Justice, U.S. Attorney’s Office, Southern District of Mississippi press release said, “Despite the requirements for properly marking and lighting the Bean 20 and its dredge pipeline, Bean, through its agents and employees, failed to do so. Bean, through its agents and employees, was aware of repeated incidents when mariners struck the dredge pipeline, culminating in the fatal accident when Mark Barhanovich’s boatstruck the pipeline on September 16, 2012.”

The U.S. Attorney’s Office went on to say, “Bean admitted that its negligence, violation of law, and inattention to duties resulted in the death of Barhanovich, which is the basis for the charged felony violation of the federal criminal law governing misconduct or neglect of ship officers. The statute is also commonly referred to as the Seaman’s Manslaughter act. A corporation convicted of this offense is subject to a penalty of not more than $500,000 per count.

U.S. Attorney Gregory K. Davis said, “It is hard to understand how an experienced maritime business like this could have failed in its duty at such a high cost.”

Our partial list of dredge pipe strikes shows this in not an uncommon event.

Statements made by Bean in deposition about their post accident responses to the media provided further insights into their attitude. For example, Bean’s hiring of a public relations expert to tell the Biloxi Sun Herald newspaper the pipeline had been marked and lit since the beginning of the project when they knew it was not properly marked. James W. Bean, Jr. deposition. 4 February 2015. Pages 198-209.

At one point, Bean even used the numerous previous strikes of the dredge pipe as a defense. Bean said lots of other boats hit it and their motors did not break off and flip in so Mr. Barhanovich’s outboard was defective and its Suzuki’s fault.

A 19 October 2015 story in the Biloxi Sun Herald reported the Coast Guard only found four orange fenders used to float the dredge pipe marking its location along the 3800 feet from the Barge to Deer Island. USCG reported seeing employees placing tying additional fenders to the pipeline as they were leaving the accident scene. Lights to mark the pipeline had been taken down in advance of Hurricane Isaac and had not been replaced.